Caltrans' map of culvert replacement as it relates to the Willits Bypass.

Caltrans’ map of culvert replacement as it relates to the Willits Bypass.

Caltrans is currently working with Covelo contractor Wylatti to replace culverts located along Highway 101 north of Willits, which will result in 1-way traffic controls — and potentially up to 20 minutes of wait time — and could last for the next two weeks. According to Caltrans District 1 Public Information Officer Phil Frisbie, Jr., the beginnings of the culvert failure was initially discovered on Monday, October 17 during a routine after-storm inspection, after which contractors immediately contacted engineers about the damages. 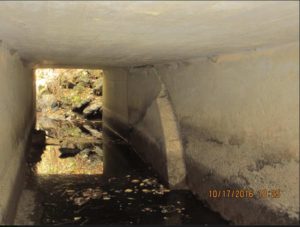 Caltrans’ photo of the culvert damage from October 17.

The Caltrans’ Facebook post states: “Engineering staff were notified, and their inspection resulted in the initiation of an emergency replacement contract, and the culvert was shored up with timbers to ensure the integrity of the highway. The 5’x6’ concrete box culvert was originally built in 1917, and was extended in 1984 to allow the addition of shoulders to the two-lane highway.”

Frisbie said the agency has the replacement pieces of culvert on hand, and so the contractor was able to begin work immediately, starting this morning, Friday October 21. Frisbie added the work may not take two weeks and will not directly impact work on the Willits Bypass, but the agency hopes it will be finished in time for the Bypass Completion Celebration on November 3 so that “people can enjoy the bypass,” as the exit on the north end. More details on the work’s progress and additional photographs may be available Monday. 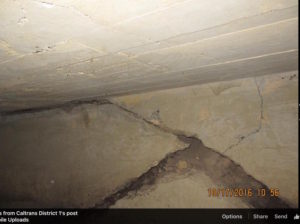 Caltrans’ picture of the culvert failure taken during post-storm inspections on October 17.

He said while Caltrans usually avoids doing 1-one traffic controls during the Willits area during the day, the work required to replacement the culverts will require the traffic controls to remain in place 24-7 until the work is completed, even if work is not happening around the clock. Contractors will likely need to dig another trench alongside the old culverts, put in the new ones, and then backfill and pave over them, requiring one lane to be closed. Contractors will then need to repeat the process on the other side of the road to connect the new culverts, and then go back and remove the old ones.

In terms of Bypass work, Frisbie said there will be no additional changes to traffic controls in the Bypass area until the new route is expected to open on November 3. He said he expects traffic to be switched to the Bypass on the afternoon of November 3, but if there are any delays it may switch on the morning of November 4.

Caltrans is currently completing some striping, particularly on the north and south ends of the Bypass where the old highway connects with the new, and some electrical work for the lighting at the interchanges. Frisbie added that the recent storms revealed some drainage issues with the paving on the Bypass itself, due to bumps in the pavement and related issues. “It was actually beneficial to test out the drainage,” Frisbie said of the storms, and Caltrans will be working on the puddling issues as they complete Bypass work.

The Bypass completion ceremony will take place at 11 a.m. on the south end of the viaduct,

and is open to the public. Entry will be at the bypass’ south interchange, and visitors are instructed to follow “Special Event” signage for parking, which begins at 10 a.m.

The ceremony will include a special dedication ceremony of the 1.1 mile viaduct for US Navy Seal and Willits local Jesse Pittman — and former Mendocino CalFire firefighter — who was killed in combat in 2011 in Afghanistan. The viaduct will be named the Jesse D Pittman S01 Navy SEAL Memorial Bridge and a CalFire color guard will be present at the dedication.

According to Caltrans’ announcement, “The Willits Bypass Project, first conceived over 60 years ago, will relieve congestion, reduce delays, and improve safety for traffic and pedestrians along U.S. Highway 101 and through Willits. This $300 million highway improvement project is funded by $136 million in Proposition 1B funds, the 2006 voter-approved transportation bond. In total, about $19 billion in Proposition 1B funds have been distributed statewide.”