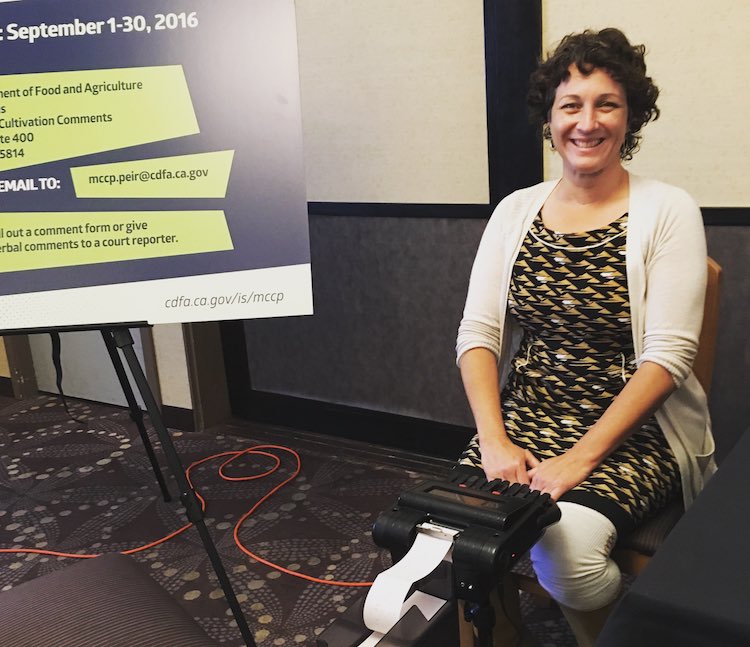 Jennifer Yang, local court reporter, took public comment at the CDFA Eureka meeting. "For the record, I'm very happy to be part of this process," she said. 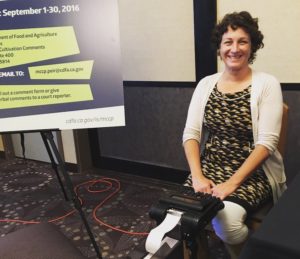 Jennifer Yang, local court reporter, took public comment at the CDFA Eureka meeting. “For the record, I’m very happy to be part of this process,” she said.

California’s Department of Food and Agriculture is tasked with regulating and overseeing the new state licensing program for cannabis cultivation, under which marijuana growing will be reclassified as agriculture. But the CDFA is still figuring out how cannabis farmers will be regulated — as well as starting the lengthy environmental review process for the regulatory program itself — and is holding a a series of public meetings around the state this month to get input.

On September 13 The Mendocino Voice headed up the 101 to the CDFA’s “scoping session” in Eureka, to chat with agency representatives who gathered at the Red Lion Hotel hoping to get as many public comments from locals as possible before their September 30 deadline. There, staff and consultants were standing around in the conference room, next to informational poster boards and a power point playing on repeat, taking questions and opinions from the more than 150 north coast farmers, local officials, residents, and Eureka TV crew who stopped by.

CDFA will be in charge of cultivation licenses and the state’s future “track and trace” program, the details of which have yet to be determined. In their email announcement, the agency provided a list of questions for the public, explaining they were seeking input on everything from defining cultivation to determining the consequences for the non-compliant. On this regulatory tour, the CDFA is prioritizing conversations over slideshows, with the result being that everyone who came to the meeting had a variety of agency staff, environmental engineers and policy experts — and even a court reporter — at their disposal for over three hours on a grey Eureka afternoon. 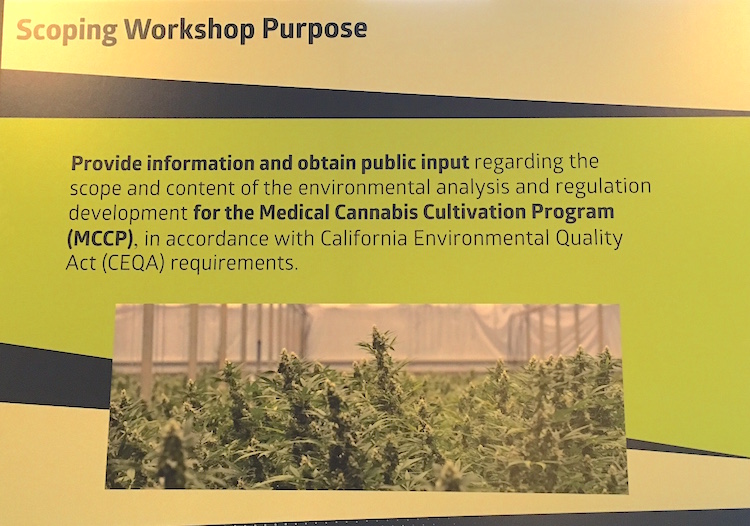 Welcome slide for the CDFA's "scoping session." Public comments are due September 30. 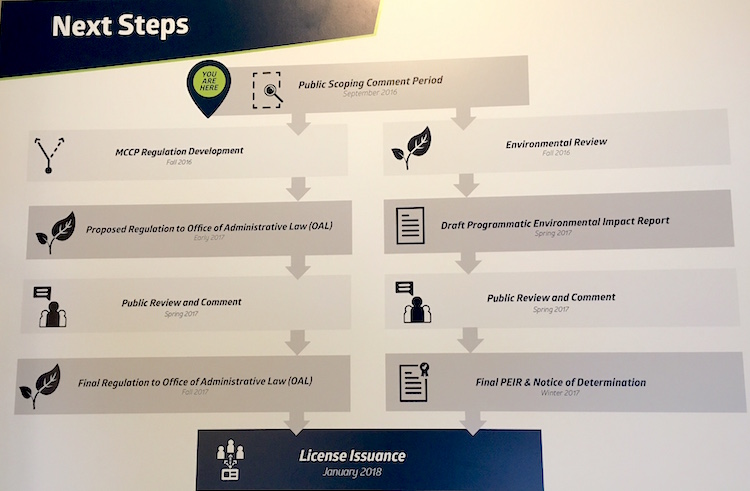 The next steps in the CDFA process as the agency prepares to issue cultivation licenses at the start of 2018. 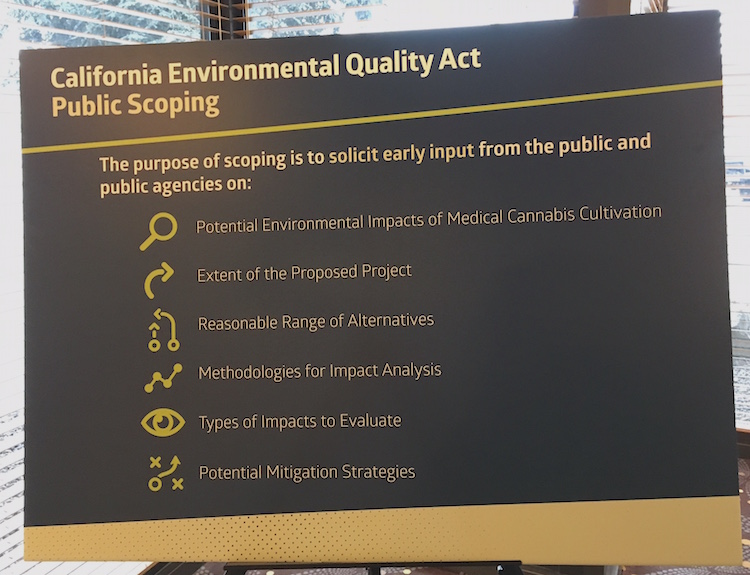 The poster board detailing information about the CEQA environmental review process for the CDFA's program. 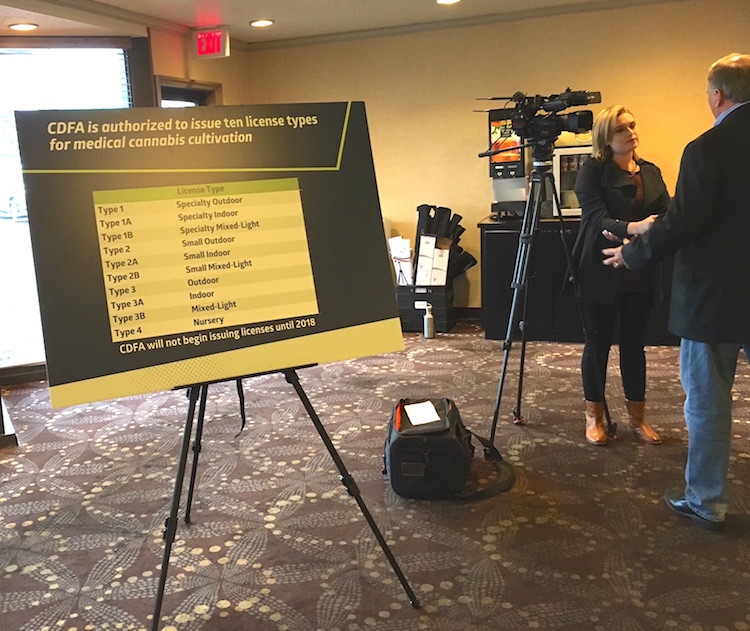 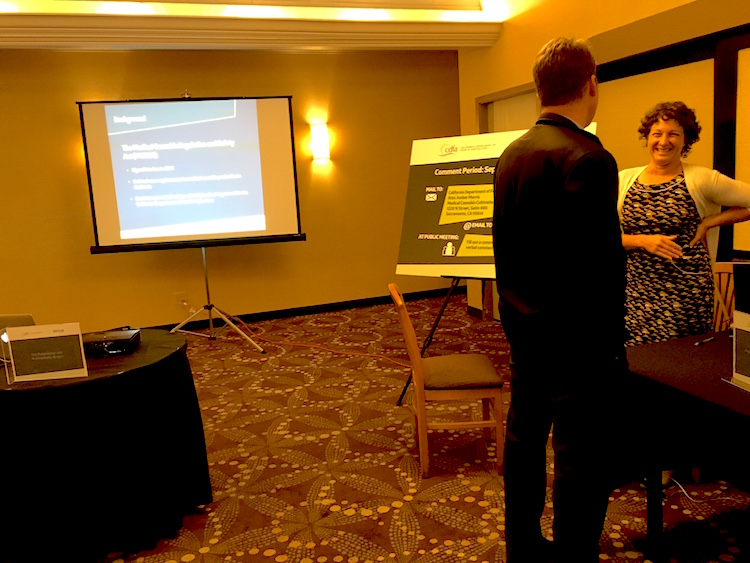 A visitor chats with the court reporter, on hand to record public comments at the Eureka meeting.

For those who came armed with questions or comments, the “scoping session” format works great, although it feels a bit like an awkward, policy-focused company picnic, with familiar faces from the region’s cultivation communities all gathered around banquet tables under fluorescent lights. The format prevents the mad dash to the experts that sometimes takes place after a more formal regulatory presentation, giving ample time for individuals to air their very specific concerns — like, “what about with the old spring-fed pond on my timber-zoned property?” It also allows those concerned about sharing their opinions in front of a public meeting to keep some anonymity.

The agency recently conducted a statewide survey tallying how many respondents by county might be seeking which type of cannabis business license, with interesting results. “We’re very happy with the number of responses,” CDFA Director of Public Affairs Steven Lyle told The Voice, though he hesitated to extrapolate much from the results.

Out of 23,253 completed surveys across counties, 1,041 people in Mendocino County responded, with 699 saying they might want a cultivation license. This put the county 6th in number of responses, beat out by more populous Los Angeles and San Diego, followed by Sacramento, Alameda, and San Bernadino, which sneaked ahead of Mendo by about 50 responses. In Humboldt, 722 answered the questionnaire (431 in cultivation) and 791 in Sonoma (485 in cultivation), although those counties are moving ahead more quickly with local licensing.

Farming licenses will come in three tiers defined by size, with categories for outdoor, indoor, and “mixed light” cultivation, and a separate nursery license. The number of licenses for the largest cultivation type, which runs from 10,000 sq. feet to an acre in size — or up to 22,000 sq. ft. for mixed-light or indoor — must be limited according to the state laws. A smaller “specialty cottage” license, AB 1521 proposed by local Assemblyman Jim Wood, was passed by the legislature recently but is not yet signed by Governor Brown.

In the middle of the room stood Amber Morris, Branch Chief in the CDFA’s Medical Cannabis Cultivation Program, who spent the afternoon chatting with visitors. Morris, who used to work on developing CDFA guidelines for importation of goods to California, seemed happy in her new position with the cannabis program. “It’s an exciting opportunity to start new regulations,” she said, emphasizing the agency was seeking all input about “what really works in the garden.”

Morris also pointed to the required limits on the number of large cultivation licenses as one of the challenges facing the agency. “We’re going to have to figure out what makes sense,” she said, “particularly since we don’t currently have regulations in place, and some local authorities are already issuing that size license” to cultivators. She added there would be several additional opportunities for comment throughout the process of developing the regulations.

For the farmers who made an appearance in flannel shirts and camo hats, conversations included topics like affordable compliance checks and water use. “Compliant farmers shouldn’t be responsible for paying for everyone else,” one man in a sun hat could be heard saying emphatically. Local officials, industry group representatives like Hezekiah Allen from the California Growers Association, and cannabis lawyers, asked questions about the process, from applications to the program’s environmental review.

For those trying to find out what the state licensing process will look like, well, the agency is working out the details. Staff recommended cultivators wanting to take action focus on applying for any local licenses available, which will be required to get state approval under the dual-licensing system. Farmers will also need to submit fingerprints to the Department of Justice for a background check, prove they work on a legal cultivation site, have a seller’s permit, and other approved business paperwork.

Attendance for the Eureka meeting was comparable to the one in Sacramento, with many traveling from around the Emerald Triangle to talk cultivation with staff. At the meeting in Sacramento a few days prior, staff said a mix of about 200 government officials, lobbyists, and industry experts “formed a line out the door to see what we were doing.” In comparison, the Redding session only drew about 75 people, many of whom were either government-types seeking education about the state program, or those with “personal grows,” which CDFA staff speculated may have resulted from less cannabis-friendly local governments.

Morris explained that although the sessions had drawn different crowds, most attendees seemed happy to work with regulators instead of being confrontational. She said she’d heard conflicting opinions on certain issues, such as background checks and firearm ownership, which the agency will be sorting through in the coming months. Other common concerns were keeping licensure fees affordable and coordinating with local governments.

CDFA brought along with them some of the consultants who will be looking at the environmental impacts of the new cultivation program, Michael Stephenson and Michael Smith. The two spent the afternoon talking to locals about energy use, carbon footprints, and explaining the process for the CDFA’s Environmental Impact Report (EIR). As with many other new programs in California this regulatory scheme must first undergo an EIR to comply with the ol’ California Environmental Quality Act (CEQA), which might result in changes to the program to ensure increased cultivation won’t cause environmental damages. Stephenson and Smith explained that the state planned to develop “higher level” guidelines, with local governments creating environmental standards appropriate for their regions.

All materials from the CDFA sessions, including how to submit your public comments for consideration, are available here. Comments on the initial regulations and EIR can be received until September 30 by phone, mail (Department of Food and Agriculture, MCCP 1220 N Street, Suite 400 Sacramento, CA 95814), or electronically ([email protected]).