The Sawmill Fire remains at about 1500 acres, and with crews having made progress overnight, it is now 20% contained. Firefighters face a difficult task today with temperature forecasted to reach what they were yesterday, they will be working in steep, difficult terrain.

We’ve also received this map courtesy of Kym Kemp, over at Redhead Blackbelt.

The Sawmill Fire, burning in the hills above Cloverdale, Sonoma County, has spread rapidly to 1500 acres, continues to grow at a “moderate rate,” and is 10% contained according to CalFire. The fire is situated in a rugged, steep terrain of oak woodland and tall grass, making access difficult. On this hot day, with temperatures in the 90s, crews are facing extremely dry conditions, compounded by five years of drought. Evacuations remain in progress on Big Geysers Rd. and Geysers Resort Rd. about 10 miles east of Cloverdale. The cause remains under investigation.

CalFire, Napa County Fire, Cloverdale FPD, Geyserville FPD, Healdsburg FD, Windsor FPD, Sonoma and Lake County Sheriff’s Office, the California Highway Patrol, and the California Dept. of Corrections and Rehabilitation are all cooperating on the fire. Eight tankers have been used, and two helicopters, 23 engines, and a total of 240 personnel have responded.

We will continue to update as more information becomes available. 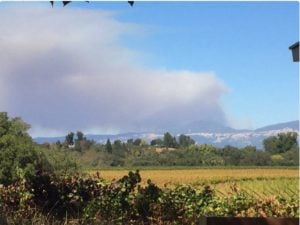 View of the Sawmill Fire outside Cloverdale from Cal Fire PIO’s Berlant on Twitter.

The Mendocino Voice just received reports of smoke visible from the Walker Lake/Black Bart area south of Willits, which may becoming from the Sawmill fire started this morning 10 miles east of Cloverdale. The fire was about 75 acres at around 1 p.m., but has rapidly grown to more than 300 acres and continues to spread with 0% containment. Crews coming from Sacramento and around the region.

State Senator Mike McGuire and CalFire are both providing updates on the fire on twitter as it develops. McGuire is reporting that structures are threatened in the Pocket Ranch area, and that “super scooper” air support planes are arriving to help douse the flames. Shortly after 2 p.m. he reported about 50 residents were being evacuated.

Here’s a retweet from McGuire, a video with a view from Lake County:

Local authorities want to remind everyone that although fall is officially here, fire season isn’t over, and many large fires can start during September and October until enough the region receives enough rainfall to dampen fuels. Lowenthal cautioned, “Despite fall being here, and the reports of the first dusting of snow in the Sierras, fire season is still here.”

NOAA is predicting warm temperatures over the next couple days, increasing fire risk in our region to “elevated”, and the longterm drought forecast predicts the dry season will continue through the west throughout October and perhaps further. Mendocino County is currently under a “burn ban” until conditions are considered wet enough.

We’ll be updating information as it comes in. We also have a map of current CalFire incidents on our “Firewatch” page so you can see what’s happening around the state.

Here’s the view from our reader in the Walker Lake Road area south of Willits: 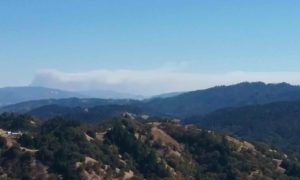 A view of smoke submitted by a reader from Walk Lake Road area south of Willits.