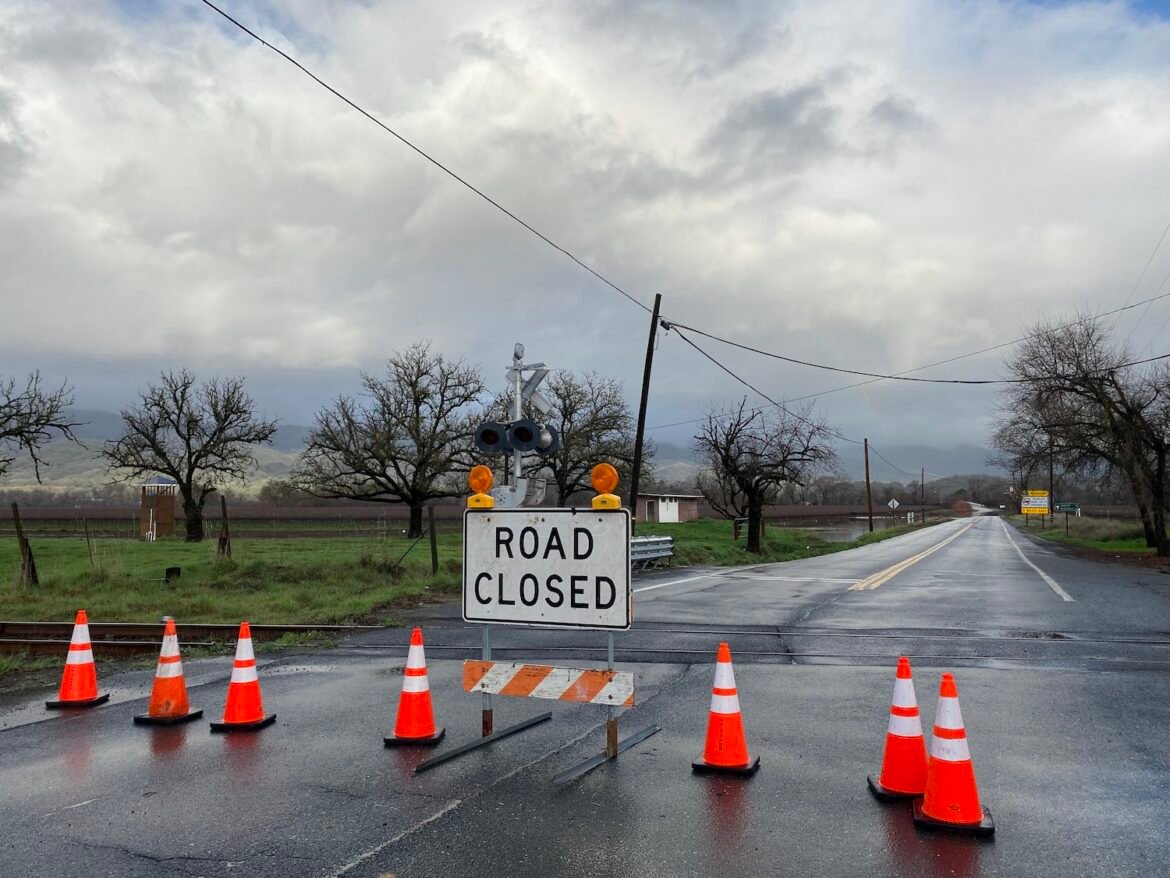 S.R. 175 closed at Highway 101 on due to Russian River flooding January 5, 2023, during the second atmospheric river. (Kate B. Maxwell/The Mendocino Voice)

Updated 1/15/23 1 p.m. — State Route 1 north of Point Arena has reopened, as has SR 128. However, there have been ongoing reports of collisions and road impacts across the region, including an accident on US Highway 101 near Ridgewood Ranch south of Willits, and a potential sinkhole on Highway 101 near Cooks Valley — so take caution if you’re traveling today.

The county has issued a statement and began an investigation into the public health conditions at Creekside Cabins, where a sinkhole has trapped more than 50 people for more than a week. We’ll have a longer report on the situation soon.

The City of Ukiah Police Department has issued a Nixle alert noting that: “A water main break has occurred in the area of CVS parking lot. Teams are working to address the problem as we speak. No ETA given and please avoid the area.” That location is in S. Orchard Street in downtown Ukiah; the Nixle notes the “situation is being worked on.” Read the alert here.

Updated 1/14/23 2:20 p.m. — The Army Corps of Engineers has announced that the agency is planning a series of water releases from the Coyote Valley Dam at Lake Mendocino on mid-day Monday, January 16, which will manage the water levels and allow for additional storage capacity in the lake if the need arises during ongoing rains. “This is the first time in nearly four years that a high-flow release is required to manage rising lake levels,” the agency’s press release states. You can read our previous update on the water levels at Lake Mendocino here.

The County of Mendocino has issued a declaration of public nuisance for the Creekside Cabins property, where a sinkhole has trapped a number of residents for more than a week, and led to a debate over how the situation will be addressed — you can read our previous update on the sinkhole here. According to today’s press release, the public nuisance declaration will facilitate the county hiring a private contractor to install a temporary bridge, which will be used to relocate residents from the location. You can read the county’s full press release here.

We’ll continue to provide updates on both these situations, although additional information may be delayed due to the holiday weekend.

The California Highway Patrol is reporting that traffic on Old River Road near Hopland may be impacted in at least the northbound lane, after a tree fell on a vehicle the is “larger than a telephone pole,” according to the incident page; emergency crews are on the scene and a tow company is en route. Slides and rocks in the road are also being reported on Old River Road in other locations.

Updated 1/14/23 9:45 a.m. — Another day of rain is in the forecast for the North Coast, and flooding is currently possible through Sunday afternoon. State Route 175 has closed at the intersection with U.S. Highway 101 as of 9:45 a.m. this morning due to flooding of the Russian River.

There are multiple rivers in Mendocino County that are expected to reach flood stage today, including the Navarro River at Navarro, and the Garcia River north of Point Arena, which will likely result in road closures. In addition, low lying areas and small creeks may flood, and there is continued risk of slides and trees falling due to saturated soils from the last several weeks.

A number traffic incidents as well as rocks and floods on the roads are being reported by the California Highway Patrol this morning, so please take caution if you are traveling. The storms have been impacting roads and communities across Northern California, which is expected to continue over the next several days, and there are highways closed in Humboldt, Sonoma, Marin, Lake, and across the region.

We’ve included a number of informational links at the bottom of this article to help you check on current conditions in your area, and we’ll continue to update you on timely storm information. You can also read our coverage on the storm’s impacts, our emergency winter weather resource guide, our reporting on the local fatalities from the storm, and our article about houseless residents facing the weather, and about the sinkhole north of Willits.

Updated 1/13/23 3:45 p.m. — Mendocino County has issued a press release letting residents know that potholes are likely to develop on the roads due to the weather, and that there will be delays in the county’s ability to repair them, particularly until the rains are reduced. Residents are asked to be patient regarding any location reports for potholes, and to take caution and slow down while driving on county roads.

The announcement states that staff will initially be prioritzing road repairs necessary for public safety after the recent storms, and that potholes could continue to develop while rains continue, which could be until April or later. In addition, previously fixed patches of road may wash out during heavy rains.

Due to the increase in wet weather after three years of drought, the Mendocino County Maintained Road system will be experiencing increases in the appearance of potholes on County Roads. County Road Crews will work to address these potholes, in a systematic manner but there may be delays.

Road Crews are busy with the re-opening of roads blocked by trees & slides due to the severe weather conditions and must prioritize public safety first. As weather conditions improve, crews will systematically move through areas patching all potholes prioritizing the main collector roads in the county. While we encourage reporting of potholes, we ask the public to understand that response for “location calls” for potholes is not efficient, so responses will be delayed until the area is visited.

Please be aware that as the heavy rain continues, wet patched fixes often wash back out.  This is common across many county roads. Therefore, residents and visitors should expect more potholes as rain comes from now until April.

To report dangerous road conditions or a major pothole, please contact the Mendocino County Department of Transportation at 707-463-4363.

Updated 1/13/23 1 p.m. — The flood watch for both the Russian River at Hopland and the Navarro River at Navarro have been replaced with a River Watch Warning from the National Weather Service, which predicts both rivers will reach flood stages this afternoon, and then again on Saturday. Flooding of these rivers could lead to ongoing road closures; there is also a flood warning in effect for the Garcia River north of Point Arena until Sunday, Jan. 15 at 4 p.m.

NWS Eureka has been providing updates on their twitter page:

There are still more than 200 PG&E customers without power on the south coast, many of whom have been without power since January 4; the utility company’s outage map shows that the estimated time of repair of some of these outages is today, Jan. 13.

Updated 1/13/23 9:35 a.m. — Caltrans has issued a warning that State Route 1 north of Point Arena may need to close once more due to flooding from the rising waters of the Garcia River; you can check out the current river gauge and Caltrans camera of that location.

MENDOCINO Co., 1/13/23 – Winter weather is expected to continue today through potentially early next week across the county. The National Weather Service (NWS) has issued a hazardous weather outlook, which includes a flood watch in effect from Friday evening through Saturday evening, as well as a high surf advisory for the Mendocino, Humboldt, and Del Norte coasts today with swells up to 23 feet possible.

As of 8:45 a.m. Friday morning, slides and rocks have been reported in multiple places along State Route 1, in the vicinity of Point Arena and north of Fort Bragg, according to the California Highway Patrol (CHP) incident page, as well U.S. Highway 101 near Shimmins Ridge north of Willits, and other roads across the region. Road conditions are likely to continue to be messy across the state with ongoing storm conditions, so please take caution if you need to travel over the next several days.

Multiple inches of rain across the area are possible, which will increase the likelihood of flooding and trees falling due to already saturated soils. From the NWS Eureka’s office flood watch:

Excessive runoff may result in flooding of rivers, creeks, streams, and other low-lying and flood-prone locations.Flooding may occur in poor drainage and urban areas. Area creeks and streams are running high and could flood with more heavy rain. Rainfall on already saturated soils will increase the risk of rock and mudslides.

ADDITIONAL DETAILS – Showers over the past 24 hours have kept soils very saturated. Another strong pulse of moisture will bring more rain late tonight into early Saturday. Models show a relatively concentrated period or precipitation totaling 1.5 to 3 inches across the southern portions of the area. That amount of rainfall over roughly 12 hours will increase the risk of flooding.

This ongoing series of storms will be impacting much of California, so if you are planning to travel outside of the county, you should check the current conditions and potential road closures along your route. Meteorologist Daniel Swain will be holding a live information session on his Youtube about these storms, the historical context, and more that you can watch beginning at 9:30 a.m.:

The influx of water has brought some good news — the south boat ramp at Lake Mendocino has been reopened, according to the Army Corps of Engineers. You can read our latest about the water levels in the lake here.