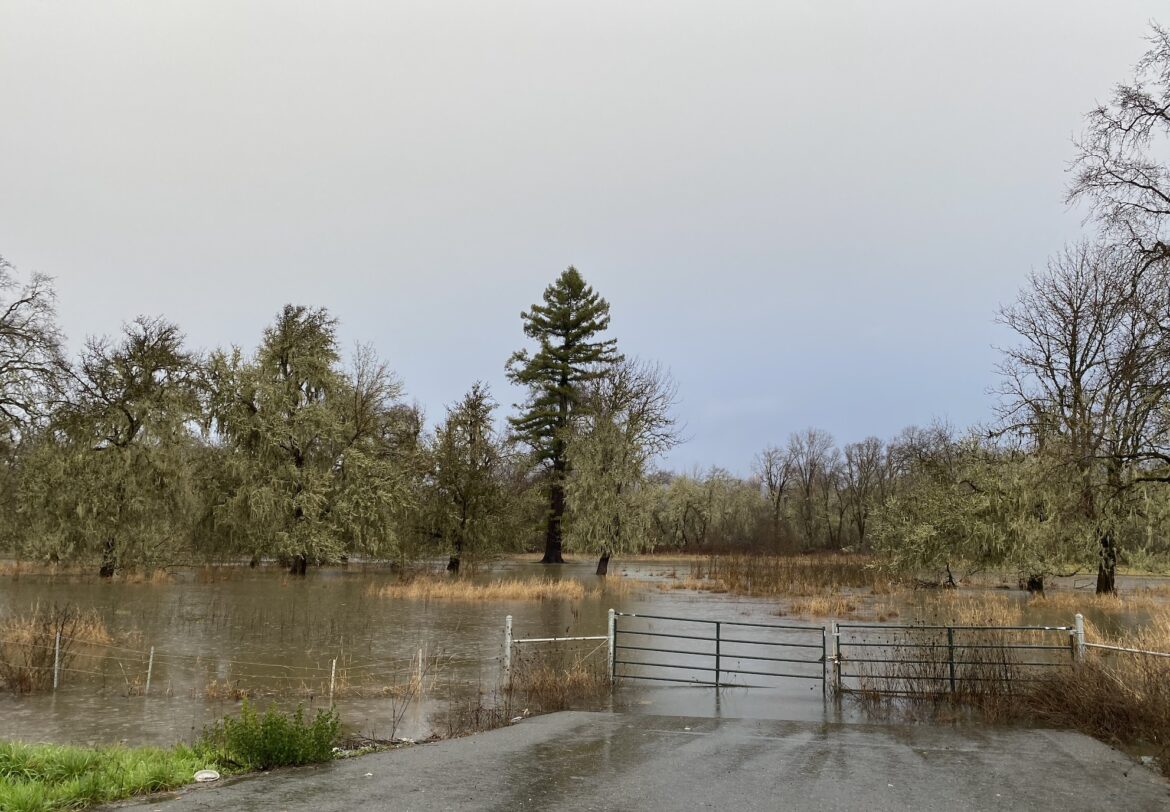 Flooding in the Little Lake Valley in Willits, at the offramp of U.S. Highway 101 exit north of Willits on Jan. 5, 2023/Kate B. Maxwell

MENDOCINO Co, CA, 1/13/23 — As California prepares for what will likely be the final atmospheric river storm in a two-week series that pummeled the West Coast, Mendocino County is recovering from the damage wrought by high winds, massive swells, and a lot of water.

At a special City Council meeting in Point Arena Thursday night, called to ratify the declaration of a local emergency, Sheriff Matt Kendall shared kudos for how Mendocino County residents and volunteers rallied together during the bad weather and power outages.

“I wanted to extend a big thank you to all of our local fire agencies,” he said. “A lot of folks who didn’t have power at their homes, they came out to help others. These small communities came out to support their neighbors — and that is a huge support for myself.”

The meeting also included a reminder of why these emergency declarations are so helpful: Jennifer Ketring, executive director of Pacific Community Charter School, said two large pine trees fell about five feet from the school and a branch went through the roof “destroy[ing] the entire front of our school.” The emergency declaration will help her fund repairs and obtain necessary waivers for the school closures that occurred due to power outages.

Here’s a look at some other impacts around the county:

A PG&E contractor, the passenger in the crash that killed 37-year-old Edgar Castillo, has been released from the hospital, according to an update shared on a GoFundMe in his name.

Jose Hernandez, 24, will be out of work for at least nine months after the crash on Mountain View Road. He broke his neck and had multiple facial fractures, enduring surgery to fuse his spine, the GoFundMe detailed. The fundraiser for Hernandez has currently raised $3,145 of a $10,000 goal.

“He has always been an extraordinarily hard worker, & he loved his job,” his loved one wrote online. “Always made sure his family was well taken care of, by working long hours in the storms.”

Many PG&E workers have landed in the vicinity of Point Arena in the past weeks, responding to downed trees and power lines from the atmospheric river storms and numerous outages. Surf Market, a grocery store in Gualala, shares photos and stories of the workers daily to express the community’s gratitude.

“Everyone in this area has been so friendly and kind,” a couple workers said in a recent post. “It feels great to be appreciated and it sure makes a difference. Please keep an eye out for those cones and flags as you are driving the roads in the area. We want to keep everyone safe while the other teams are working to get the lights turned on for your community.”

Wavelength Farm in Manchester was in the eye of the storm last week, enduring damage to three of its four production tunnel hoop houses. A buoy in Point Arena recorded wind speeds of more than 50 miles per hour off the coast there.

Kelan Daniel, who co-manages the farm with his wife, Carly Taylor, spoke with The Mendocino Voice about the experience.

“Every year, one out of our four hoops will go flying, or the skin will rip open — things just naturally get eroded by the wind and salty air and the coast and the sun,” Daniel said. “We’re used to doing a lot of maintenance, but seeing the intensity of the storm and how much damage it was able to do in the peak of that 10-hour cycle … it just blew my mind, really.”

The farm was without power for days. Winter can already be a slower time for Wavelength, which prides itself on supplying food within Mendocino County at six different restaurants, a couple honor-system farm stands, and the Gualala and Fort Bragg farmers’ markets. But thousands of dollars in damages was an unforeseen complication — though Daniel said donations through the farms’ Instagram have helped them recoup much of the cost.

“People really care about our farm,” Daniel said. “It was validating just to see how much people love and care about us and want us to be here.”

A sinkhole that opened Dec. 30, 2022 in front of Creekside Cabins & RV Resort is still cutting off vehicle access for dozens of residents. Many are low-income or on Social Security.

“I truly feel all this is occurring because we’re low-income out here,” resident Steffanie Darr told The Voice, adding, “We’re surviving out here, because that’s all we can do.”

According to the county, the owner was deemed responsible for repairing the culvert and had selected a contractor who was authorized to start work on an emergency basis. But on Thursday, a Caltrans representative said the agency still had not received a permit application to begin work.

Find the full story on the sinkhole here.

A damaged train trestle bridge crossing Broaddus Creek was in danger of causing flooding due to a debris blockage — but has been removed, according to a statement from the City of Willits.

Residents had shared photos of the failing trestle owned by the Skunk Train; they had previously voiced their concerns that the trestle might fail.

“Their quick response in removing a debris blockage and a compromised railroad trestle bridge on Broaddus Creek helped alleviate a potential significant increase in localized flooding,” the City said in a statement. “This demonstrates the resiliency and cooperation of local agencies and contractors in the best interest of our community.”

The removal was a collaboration between the city, local contractors Bouthillier Construction and L.D. Giacomini, the Skunk Train, Great Redwood Trail Authority, and California Department of Fish and Wildlife.

Trifecta of damages to firefighter’s property in Brooktrails

Downed trees have been a huge impact of the storm, Sheriff Matt Kendall said, with the majority of calls coming into the department about fallen trees and impacted power lines.

Natya Hanson, a captain of the Brooktrails Township Fire Department, said a tree fell on her house Jan. 8 at 3 a.m.; then the next day, a tree fell on both of her vehicles. One was totaled, she said.

“I’m just looking to get things together so I’m not financially struggling,” she wrote in a GoFundMe she created after the incidents. “I have a lot of anxiety even sleeping in my own home.”