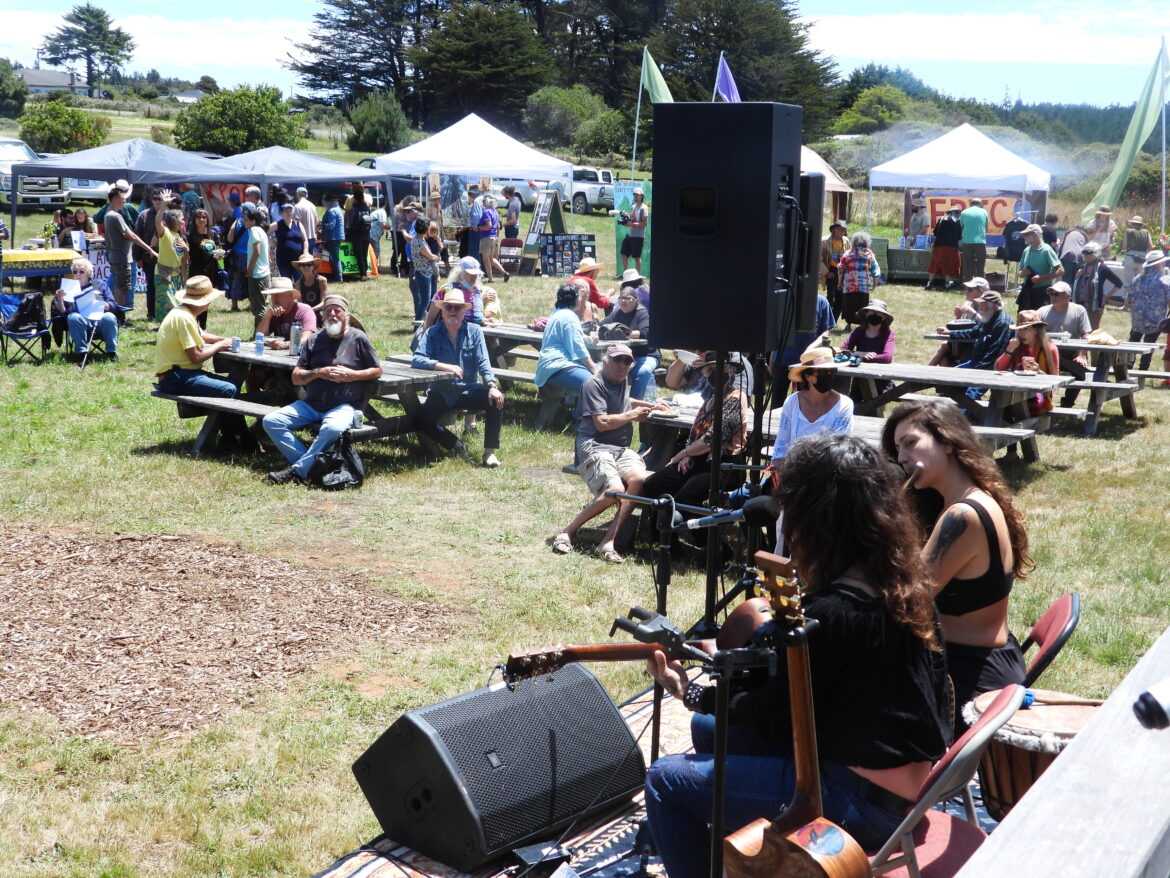 CASPAR, 6/21/22 — Caspar is back! Pandemic hibernation finally firmly in the past, the Caspar Community Center drew a huge crowd, old friends, new friends, great music and even a little controversy for the Sacred Pomo Homelands Forest Fest on June 11.

The freshly minted summer promises to be full of regular and special events, with a new patio and outdoor kitchen in the future. At the Caspar Community monthly board meeting on June 17, upcoming events and plans for the center were discussed, especially the popular fourth Sunday breakfast — the next one is set for June 26. And the center’s 20th birthday celebration is coming up on July 9.

The Caspar Community Center, which began in the early 1900s as the schoolhouse for the bustling lumber town, now includes a post office. Next door to the center is Caspar’s most iconic historic “church” building with its towering steeple.That building was first a  Baptist church, then a Foursquare Gospel Church until 1996, when it was acquired by the Mendocino Coast Jewish community, a key player in social justice movements along the coast.

The size of the crowd at the Sacred Pomo Homelands Forest Fest surprised organizers as people literally came out of the forest, some for the first time since the pandemic lockup, to enjoy music and presentations about how Natives and activists brought about the current delay in logging in Jackson Demonstration State Forest.

In 2021, the wave of activism surprised loggers who had been awarded contracts to log in the nearly 50,000-acre forest, which has been devoted to scientific logging since the end of World War II. The state’s public comment period about the Caspar 500 harvest came in spring 2020 just as the pandemic hit, and protesters did not raise their voices at that time. But just over a year ago the scale and nearness of the harvest hit home. Protesters ranged from tree sitters, to those offering informational events to those chaining themselves to forest gates and even risking their lives by entering areas being actively logged.

Now, numerous people are monitoring the difficult-to-access harvest plan notices. Protesters demanded that CalFire reconsider the harvest and that the agency fulfill its legal requirement of consulting with Natives. The regular controlled burns Natives did to manage the forest is now recognized as not only wisdom but the best science. But for the past two centuries logging solely for profit, along with environmental strictures that land was either desecrated or not touched, have created dangerous and unproductive brushy forests from Canada to Australia. Indigenous controlled burning practices baffled Europeans and were outlawed in many countries.

Jima Abbott lived on the edge of Jackson on Caspar Orchard Road for 18 years; he often walked in the forest daily. He guessed as many as a thousand people came to the event, spread out to a few hundred at a time. The lot was always full, and parked cars lined the road in both directions.

“The purpose of the event was to get people together who think saving Jackson is important, to raise money to help the organizations that are working on that, help inform people about groups that are focused on helping Jackson, nature and the earth and, because of recent changes, celebrate the latest good news in that area,” said Abbott.

With 17 booths, ranging from environmental radicals like Earth First! to face-painting, Thanksgiving Coffee, and Native presentations, retired logger Gary Hayter objected to the idea of ending logging. An intense one-man protest, Hayter passed out and posted fliers decrying the loss of jobs because of the forest moratorium.

Hayter said the state forest has always been logged in a way that allowed it to regrow big trees and keep the fire danger down while providing good jobs and lumber that built the town of Caspar and the homes of many of those now objecting to logging. He retired after 47 years as a logger.

“Many of my ancestors worked in the mill down there in Caspar,” he said, saying Caspar’s founders would be “spinning in their graves” if they knew an event celebrating a battle against logging was being held at what is now the Caspar Community Center.

Logging opponents say times have changed, and global warming demands trees be treated differently. They successfully pushed for Native inclusion in all discussions of the land, with speeches given by Priscilla Hunter of the Coyote Valley Band of Pomo Indians

When Hayter appeared, organizers invited him to set up a table and speak. Hayter regrets now that he didn’t take the opportunity. He said his decision to protest was made at the last minute.

“If I had it to do over, I would have spoken. The part that bothered me the most was when they were tearing down my sign,” Hayter said.

“I wasn’t trying to scare anybody. I wanted to tell the other side of the story about logging.” He said he was posting his sign on a PG&E pole which he felt was not under the control of the Caspar Community Center.

While discussing Hayter (whose name was not used), the board worried about the need for security at future large and potentially controversial events. They said Hayter had not been threatening, only angry, but that someone in the future might present a threat, an all too common occurrence in recent years.

Genevieve Mullins, executive director of the Mendocino Trail Stewards, Paul Schulman, and  Chad Swimmer helped run the event (Swimmer is no longer involved with the Stewards).

“It was a real coming together of our community and a great day with even the weather perfect,” Swimmer said, noting that the event was organized by the Mendocino Trail Stewards for the Coalition to Save Jackson Forest.

Although Mendocino gets more tourists, locals know Caspar as the longtime center for old-fashioned peace and love events. Yet security has been an increasing problem in recent years. Swimmer said he had to deal with two drunks at a previous event in Caspar. The board also noted that protocols about ambulances were needed as someone collapsed, an ambulance was called, and then the person did not want to go. Questions arose about who was responsible for payment.

The Stewards have been a key leader of the resistance to logging. Several other loosely organized groups were also involved, each using different tactics.

Anna Marie Stenberg, another leader of the protest, was celebrating the moratorium with a busy informational booth at the event. Stenberg announced afterwards that more non violence training would be conducted this weekend to prepare for future events. While some forest harvests are on hold, other proposed harvest plans have been abandoned by the state.

“Forest lovers have been celebrating,” Stenberg said in an email prior to the event. “Unheard of before this Campaign, CalFire has withdrawn three very controversial timber harvest plans in JDSF. So many people submitted public comments stating so many different environmental reasons why these plans should not go forward. Also, EPIC was ready to sue and forest defenders were ready to take action. CalFire finally took notice,”  Stenberg wrote.

Music was the big draw of the day, but there were plenty of presentations. Isis Howard, an endangered species conservation biologist with Western Monarch Community Science, came on behalf of the Xerces Society for invertebrate conservation and described efforts such as the Western monarch count. Bodhi Harnish gave a presentation on creating biochar. Music at the forest festival included Darryl Cherney, Diane Patterson and a packed performance featuring UI Wesley singing with Mama Grows Funk.

The 20th anniversary celebration on July 9 will feature entertainment by Joe and Hattie Craven, Mama Grows Funk and Bug Guts. Gene Parsons will play with 2nd Hand Grass and his own band New Nashville West.

The next meeting of the board is Friday, July 1 at 9;30 am, on Zoom. The board discussed returning to in-person meeting but that has not been determined. The Center’s calendar of events is here: https://casparcommons.org/calendar/