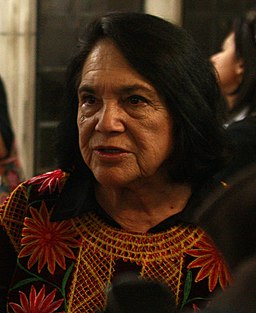 MENDOCINO Co., 4/10/22 — Dolores Huerta, cofounder of the National Farm Workers Association and life long advocate for farm workers’ rights, was born on April 10, 1930, and to honor her work, today is being recognized as Dolores Huerta Day in California. “As we celebrate Dolores Huerta’s impactful contributions to the labor, civil rights, and women’s movements, I urge all Californians to take inspiration from her example and work to change lives for the better in our communities,” the proclamation from Acting Governor Eleni Kounalakis states.

California farm workers recently protested around the state on March 31, Cesar Chavez Day, demanding Governor Newsom sign a proposed bill which would make it easier for them to vote in union elections; read more from CalMatters here.

A powerhouse for social justice, Dolores Huerta was born on this day in 1930 in Dawson, a small mining town in New Mexico. Huerta spent most of her early life in the Central Valley of California, where she would find her passion fighting for the rights of workers and their families, and helped pioneer a transformative farm labor movement that carries on to this day.

Working as a schoolteacher in a Stockton agricultural community, Huerta often saw her students come to class hungry. The experience moved her to begin serving as a leader at the Community Service Organization. Huerta went on to form the Agricultural Workers Association, where she organized voter registration drives and pushed for neighborhood improvements.

In 1962, Huerta joined forces with César Chávez to establish the National Farm Workers Association dedicated to organizing farmworkers for better working conditions. The organization was a predecessor of United Farm Workers, which they later founded in partnership with Larry Itliong, Philip Vera Cruz, and other labor leaders and activists. A skillful lobbyist and negotiator, Huerta played a central role in many of the movement’s successes, including an international boycott of grapes that led to the first farmworker union contracts, and the watershed California Agricultural Labor Relations Act of 1975.

Huerta’s lifelong pursuit of justice has earned her many accolades over the years. In 1993, Huerta became the first Latina inducted into the National Women’s Hall of Fame. She received the Eleanor Roosevelt Human Rights Award in 1998, was awarded the Presidential Medal of Freedom in 2012, and was inducted into the California Hall of Fame by a grateful state in 2013.

Through the Dolores Huerta Foundation, she continues her tireless work advocating for marginalized communities and teaching the next generation of organizers to empower others and drive social change. As we celebrate Dolores Huerta’s impactful contributions to the labor, civil rights, and women’s movements, I urge all Californians to take inspiration from her example and work to change lives for the better in our communities.