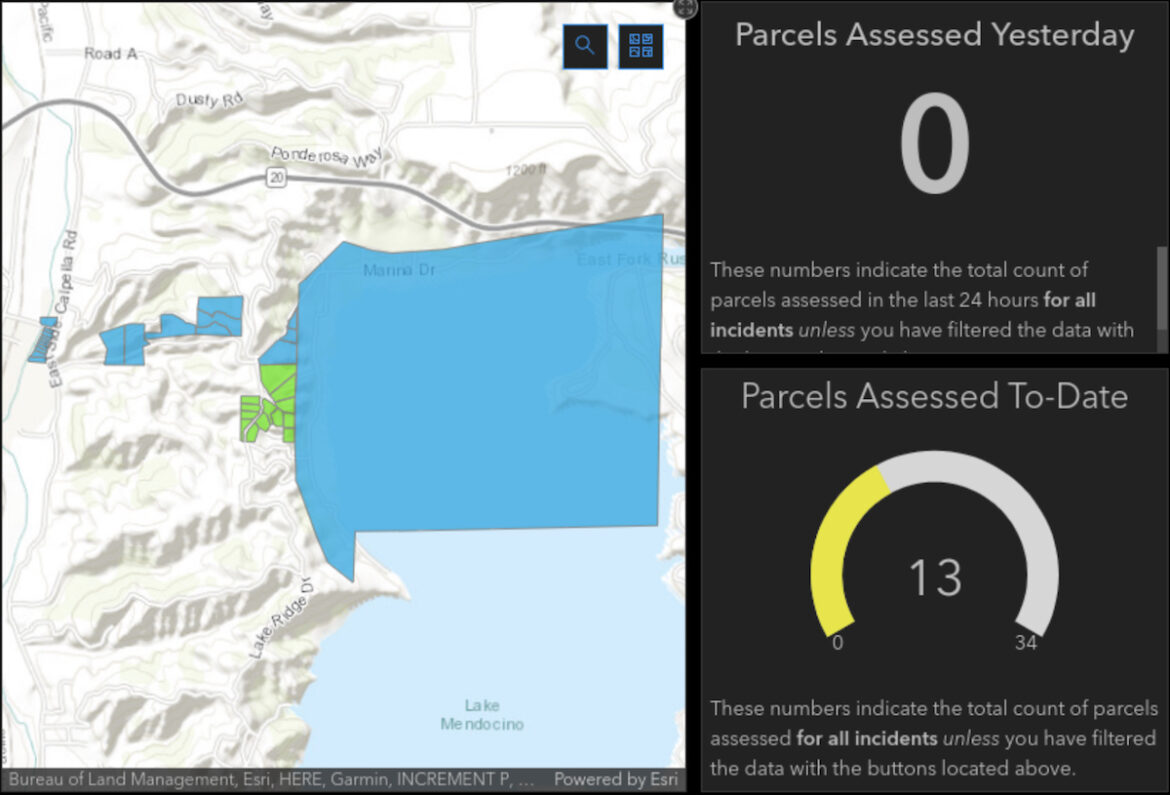 A digital dashboard set up by the Department of Toxic Substance Control shows that 13 parcels have been assessed as of just before 2 p.m. today.

MENDOCINO Co., 11/2/21 — The California Department of Toxic Substances Control (DTSC) began Phase 1 of their cleanup operation today at the site of September’s 257-acre Hopkins Fire, where a cluster of homes burned on the banks of the Russian River near Lake Mendocino in Calpella. This part of the project involves removing household materials like batteries and propane cylinders that are essentially hazardous materials once the fire goes out.

“Phase 1 includes safely identifying and removing household hazardous waste (HHW) and bulk asbestos from damaged properties that could pose a risk to people, animals, and the environment,” DTSC spokesperson Barbara Zu said by email this morning.

According to a digital dashboard the state agency set up to track their progress in real time, there are 34 parcels to assess and as of 10 a.m., 13 of those assessments were complete. They appear to have begun with several parcels on Lake Ridge Drive south of Marina Drive.

Travis Killmer with the county’s Prevention, Recovery, Resilience and Mitigation Division provided additional details about the process ahead: “First, they remove contaminated ash from things like household chemicals, batteries, paint, oils, etc. They also devalve and take away small propane tanks, larger ones they leave because they can’t determine if they were leased from a distributor or not and the distributor should be responsible for any big leased tanks. Second, they mark off any hazards they see that a ‘Phase 2’ crew will encounter when doing a full debris cleanup at a later date. DTSC will also remove asbestos if it’s a small amount during Phase 1. If there’s a ton of asbestos ash and debris, they mark it so Phase 2 crews know it needs to be handled properly.”

Late last month with the first major rainstorm of the year bearing down on the North Coast, Killmer spearheaded an emergency effort to get some damage control measures in place before the rain pushed all that ash and toxic debris into the river. The county was waiting for the state to make an emergency declaration, but it became clear that the storm would get here before that process was complete, so Killmer reached out to the Ukiah office of the California Conservation Corps and got a plan in place to install silt socks and straw wattles along the river bank in a little under 48 hours. The following day Gov. Gavin Newsom issued an emergency proclamation that got the ball rolling on this current round of assistance from the state, which includes hazmat and asbestos specialists.