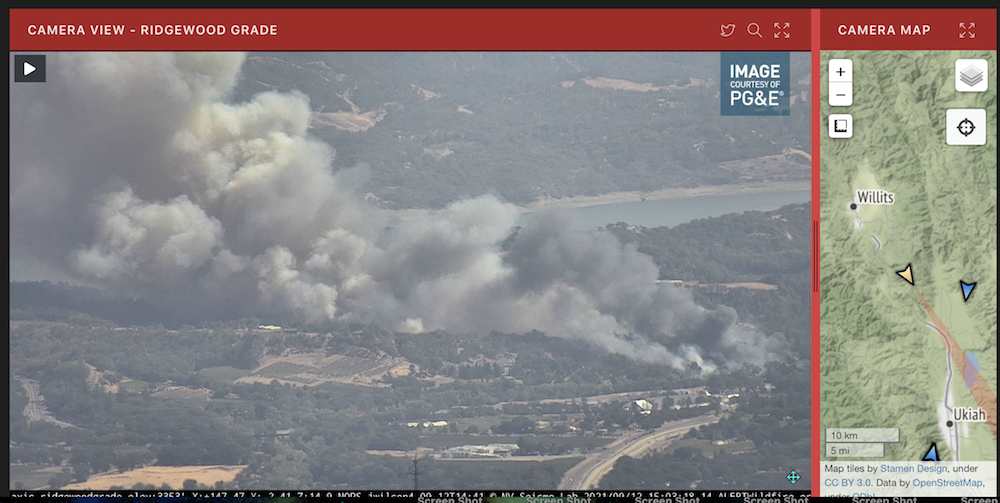 Hopkins Fire in Calpella from the Ridgewood grade camera at 3 p.m.

UPDATE 10 p.m.: CalFire has released a longer incident report for the Hopkins Fire, which notes that 200 structures remain threatened, but does not give any specific numbers as to the number of structures destroyed or damaged. According to the report, there are 262 personnel remaining on the fire. Evacuations and road closures will be updated here.

In the “situation summary” part of the report, CalFire states:

Fire is burning in a mix of grass, brush, oak and pine trees. Firefighters are working in extreme conditions; high heat, low humidity, with the potential for erratic winds. Steep terrain, heavy brush and difficult access remain challenging. Traffic along evacuation areas will be impacted as a result of road closures. Firefighters on the ground as well as aircraft are actively working to suppress the fire. We ask that the public heed all evacuation orders and warnings.

UPDATE 9:10 p.m.: Forward progress has been stopped, and containment is expected to increase over the next several hours. Some mandatory evacuation orders are being lifted and residents can begin to repopulate, according to the latest update from the Sheriff’s Office (see below). Evacuations and road blocks are also being updated at Mendocino County OES’s mendoready.org website.

UPDATE 8:20 p.m.: According to the CalFire evening update issued around 7:30 p.m., the Hopkins Fire is currently estimated at 275 acres and 10% contained. The changes in size are due to more accurate mapping. Some reports put the number of structures lost at more than ten, but no official numbers have so far been released by CalFire. Highway 20 is currently open in both directions.

The air response was called off around sunset due to progress being made, and additional resources have been released, although fire crews are still on the scene mopping up, building containment lines and monitoring the fire. Evacuations and road blocks are listed at the mendoready.org website, and shelter information for evacuees and their animals is included in our earlier updates below.

UPDATE 7:15 p.m.: The most current mapping puts the size of the fire at 257 acres, and it’s “looking really good” according to scanner reports. One structure is still burning, but firefighters sound confident it will not spread further.

A shelter for evacuees has been established at the Mendocino County Office of Education building at Old River Road, according to MCSO. Residents are asked to follow COVID-19 safety protocols and remain outside to check in at the picnic tables:

“The human shelter is located at Mendocino County Office of Education (MCOE – Address is 2240 Old River Road in Ukiah, CA / this is actually in Talmage, CA).The shelter is located between the two front buildings where the picnic tables are located.Due to COVID-19 protocols, please check-in between the two main buildings in front of the picnic tables.”

UPDATE 6 p.m.: Some portions of the fire have reduced in activity, and some resources are being released from the fire, which seems to be holding in size, according to the most recent scanner traffic, with a report from the air noting “the fire is looking really good.” Fire crews are continuing with structure protection. Evacuation warnings and orders as well as road closures remain in place.

“HOPKINS FIRE UPDATE (MOORE ST – CALPELLA):MESSAGE FROM MENDOCINO COUNTY ANIMAL CARE:The Animal Shelter at 298 Plant Road IN Ukiah will be able to assist displaced animal owners starting at 6:00 p.m.Currently we have approximately 20 to 25 dog kennels available and 25 to 30 cat cages available. Our partner – Inland Humane Society (9700 Uva Dr, Redwood Valley) is willing to assist us with housing dogs as well if needed. Animal owners with numerous dogs may be directed to go to Inland Humane Society. When arriving at the Animal Shelter in Ukiah, please see the sign on the front door for directions. Animal owners with livestock animals will be asked to go to the Ukiah Fairgrounds – 1055 N. State St., Ukiah, CA – at around 5:30 to 6:00 p.m. – the (CART) – Community Animal Response Team will be there to take in livestock animals. Thank you.”

UPDATE 5:15 p.m.: Evacuation warnings have continued to expand to the north side of Lake Mendocino, to Bushay Campground to the east. There are currently road closures in place on State Route 20 north of Lake Mendocino, and on U.S. Route 101 at the Calpella exit. Information will be at the mendoready.org website when it is available. Evacuees can find animal shelter information below.

MCSO is using a new zone system for the mendoready.org website, and so residents should familiarize themselves with their zone number, which may be used in future evacuation notices for the Hopkins Fire and others.

UPDATE 5:00 p.m.: The Mendocino County Animal Shelter is now accepting animals (as of 5 p.m.) and has staff on site at the 298 Plant Road location. From their Facebook post: “We are setting up to take evacuated animals from the Hopkins Fire. Small animals will go to the shelter here at 298 Plant Rd. Large animals that need a place to go should call Sarah at 707-272-2299 or the animal shelter at 707-463-4427. We will have staff on site and ready to intake animals by 5pm tonight.”

UPDATE 4:45 p.m.: According to Cal Fire, the fire has grown to 300 acres and remains 0% contained. Evacuations are currently extended to the west side of Lake Mendocino, and additional road closures have been put in place. The Cal Fire incident page can be found here. A shelter is being established for evacuees and more information will be at the mendoready.org website when it is available. The Mendocino County Sheriff’s Office is also updating road closures and evacuation orders on their Twitter page — these are changing rapidly so please be prepared to leave if you are in the vicinity and feel unsafe.

Deputies are continuing to notify residents in the area as well as people in thee Lake Mendocino area. At least several structures have been destroyed, and multiple structures remain threatened.

UPDATE 4:30 p.m.: According to scanner traffic, the fire may have reached the west side of Lake Mendocino, and deputies are continuing to assist with ongoing evacuations — please leave immediately if you are in the mandatory evacuation areas. The most current information about road closures and evacuation orders is available at Mendocino County OES’s mendoready.org website.

Air quality in the area is continuing to decrease and is impacting visibility for the fire response — you can get the most current fire and smoke information here. Multiple structures are continuing to be threatened.

In addition to the customers without power, additional power lines may be shut off in order to reduce additional fire risks in the vicinity.

UPDATE 3:40 p.m.: The fire has reached the hill on Lakewood Drive and is now one both sides of Marina Drive, growing towards Lake Mendocino. Deputies are continuing to notify residents in the area and assist with evacuations, and additional air and ground resources have been requested. Please avoid the area if possible to allow people to evacuate, and fire crews to access the scene.

The majority of resources are currently assigned to structure protection, according to scanner traffic, although at least one structure has been destroyed. Recent estimates via the scanner put the fire’s size at 120 acres, but that has not been officially verified.

In addition, 1711 PG&E customers are without power in the area — earlier scanner reports indicated that there were a number of downed lines in the vicinity of Moore Street. See the outage map here.

UPDATE 3:10 p.m.: The fire is spotting in the direction of Lake Mendocino on Marina Drive, and current scanner reports estimate the size at between 40 and 50 acres, although that has not been verified by official mapping.

Additional resources are currently responding to the Hopkins Fire, including at least two private water tenders. The fire is visible from the north from this PG&E camera stationed at the Ridgewood grade (see here), as well as from the eastside of U.S. Route 101.

UPDATE 2:45 p.m.: According to scanner reports, traffic is backing up in the vicinity of the fire — please avoid the area if necessary to allow residents to evacuate and emergency responders to access the fire. An air attack is currently underway, and additional air responses have been requested.

UPDATE 2:35 p.m.: The fire has grown north and east, according to scanner traffic, and a road block is being set up on East Calpella Road to allow emergency responders to access the scene. Mandatory evacuations have been issued for the area of Road 144 to 5000 block of Eastside Calpella, according to the Mendocino County Sheriff’s Office.

MENDOCINO Co., 9/12/21 —Multiple local fire crews are responding to a vegetation fire in the vicinity of More Street East Hopkins Street in the Calpella area which may have spread to a mobile home. An air response is also underway.

Evacuations are beginning in the vicinity of the fire according to scanner traffic — we will update as more information becomes available.

The Mendocino County Sheriff is requesting residents avoid the area to allow emergency vehicles to respond: