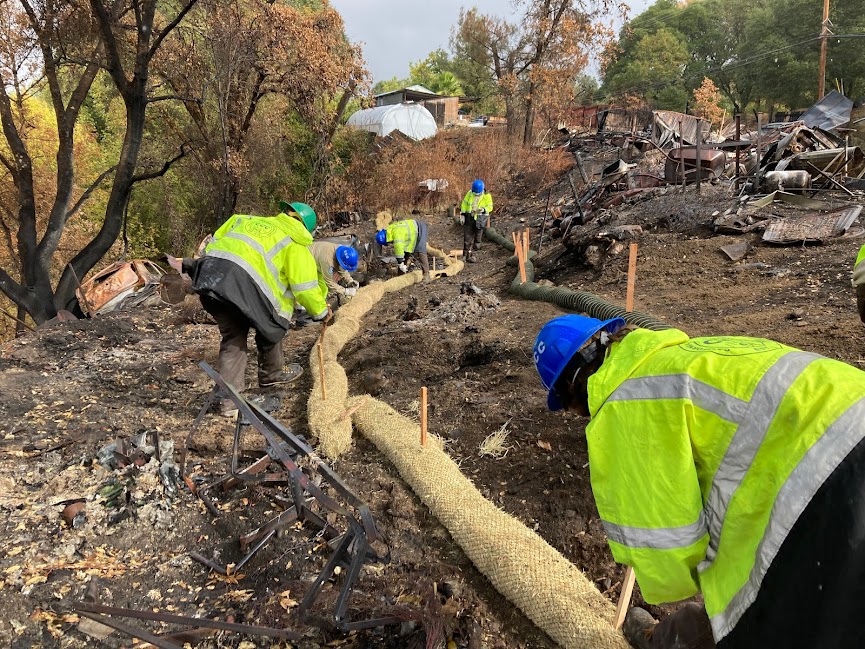 Members of the California Conservation Corps staking down straw wattles and silt socks along the banks of the Russian River to keep toxic debris the 257-acre Hopkins Fire from reaching the water. Photo courtesy of Travis Killmer.

MENDOCINO Co., 10/26/21 — The 257-acre Hopkins Fire burned dozens of structures along the Russian River last month, but cleanup efforts move slower than rain. So when the National Weather Service (NWS) in Eureka forecast four to six inches of precipitation in seven days for the Ukiah valley, county personnel recognized the Hopkins burn scar as an impending environmental crisis.

Travis Killmer, with Mendocino County’s Prevention, Recovery, Resilience and Mitigation Division addressed the Board of Supervisors first thing last week during their regularly scheduled meeting — First District Supervisor Glenn McGourty called it an “all hands on deck emergency” — and by the end of the day Killmer had returned to the board with a plan to install 1,500 linear feet of straw wattles and 965 feet of silt socks by Friday for just under $50,000. The county couldn’t do it alone, though. They enlisted the assistance of the California Conservation Corps (CCC).

It’s not entirely clear who was responsible here. The Mendocino Voice staff is not aware of any laws requiring burned-out homeowners to clean up the ruins of their lives before the rainy season. Likewise, it’s not clear that the county government had any legal obligation to step in — but they did. Thursday the CCC deployed a labor crew, assisted by volunteers from the Sonoma County-based nonprofit Russian Riverkeeper who brought supplies.

“We’ve been through four other fires and doing contract work for Sonoma County, so we’re happy to share all our help and connections,” Executive Director Don McEnhill said Thursday. “We went and bought a thousand feet of compost filled wattles and hauled them up.”

“If you look around at what’s inside the average household, things like computers and televisions, and in the garages you have pesticides and solvents and car cleaning fluids,” McEnhill said. “And then you light it all on fire? You’re producing a pretty powerful toxic stew. A fair amount of that flames up in the atmosphere but there’s also all kinds of chemicals from heavy metals to a range of petroleum products.”

The rain started on Tuesday, Oct. 19 but crews got to work Thursday morning before the worst of it hit. McEnhill estimated they were able to keep 95 percent or more of the structure fire debris out of the river. But, he said, “the biggest credit goes to the Ukiah California Conservation Corps.”

“We respond to emergencies. Wildland fire, floods, in this case erosion control and mitigation,” CCC spokesman Dana Howard said. “I can tell you that our corps members are thrilled to do this work.”

Corps members are typically between the ages of 18 and 25, but they also enroll veterans up to age 29. They earn a small stipend and in some cases housing at the CCC’s residential facilities — although Howard said those opportunities are mostly taken for now. For anyone willing to commute, however, the corps is hiring.

Returning to the Board of Supervisors this morning, Travis Killmer presented an update on the situation, now that much of the weather has cleared. A small portion of the river bank collapsed, but he estimates that most of the mitigation efforts put into place last week worked.

“We were really fortunate that our local California Conservation Corps crew was available to do the work on a pretty last minute basis,” Killmer said. “Given the amount of rainfall we received over the weekend it was really important that we got out there and managed to install 2,300 feet of protection and mitigation.”

Gov. Gavin Newsom declared an emergency in association with the Hopkins Fire and several others Friday afternoon, which should free up additional resources for ongoing cleanup efforts. Darcie Antle, assistant chief executive officer of Mendocino County, said the Department of Toxic Substance Control is expected to spend a few days removing hazardous household waste early next week and Cal OES will be helping with debris removal.