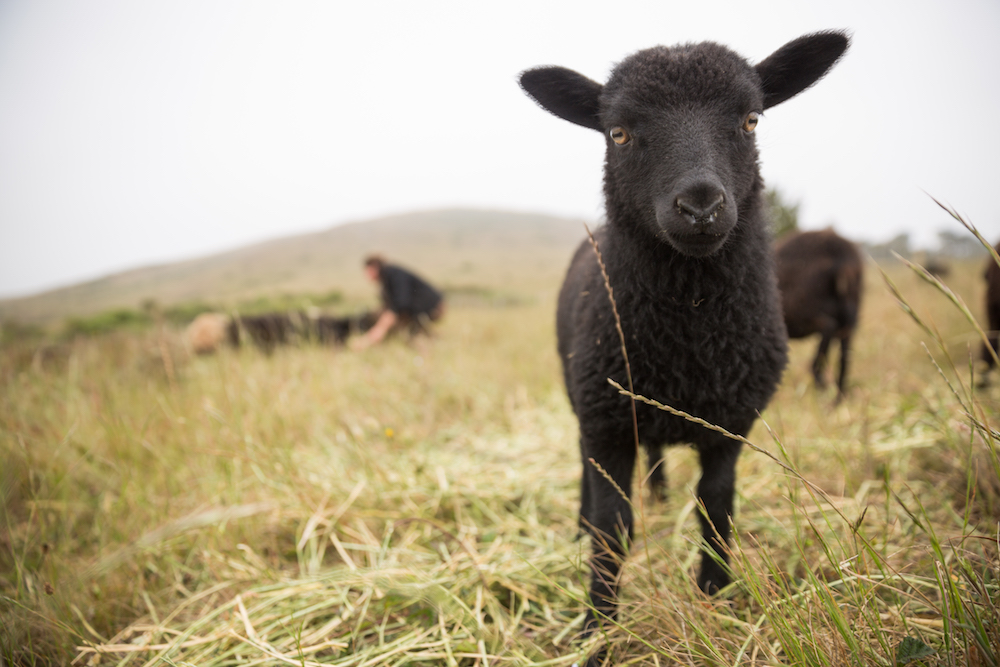 Sheep in a grazing field, photo by Paige Green

Editor’s note: The following is an op-ed. The opinions expressed in this letter are those of the writer, and do not necessarily reflect those of The Mendocino Voice. If you would like to submit a letter to the editor feel free to write to [email protected].

Editor’s note: Marie Hoff operates Full Circle Wool in Mendocino County, providing grazing services for fire prevention and vegetation management, as well as wool products that are sourced from Fibershed-verified Climate Beneficial ranches. You can learn more at her website www.fullcirclewool.com and follow her on Instagram @stargrazers. A recent article in the San Francisco Chronicle this week covered this issue.

“January 1st [2022] is coming at us like a freight train,” Andree says.  When I first heard about the problem with sheepherder’s pay in the ag overtime bill (AB 1066), I figured the powers that be would work it out.  I myself only have 45 sheep, I’m a tiny producer.  I assumed other people with more at stake, people who ran “real” flocks, flocks with a couple thousand animals, like Andree Soares (from Star Creek Land Stewards), would lobby and take care of it.  In 2017 I was busy worrying about wildfire, not a detail in ag labor law.  And then in 2018 I was also busy worrying about wildfire.  And in 2019.  Also in 2020, but compounded with Covid-19 precautions.  And here in 2021, under extreme drought conditions, I’m preparing for wildfires.  Yet that law is still set to take effect for the majority of professional sheep and goat producers, people who steward the land on a watershed scale, this coming January.  This tiny detail could skyrocket wildfire danger across California if it does.

Every year, sheep and goats munch down vegetation that if otherwise left untouched would become standing dry matter (aka fuel load, aka tinder, aka very dangerous) that could explode a tiny flying ember or a low-intensity burn into a catastrophic wildfire disaster.  Every year, herders manage these flocks of sheep and goats, traveling with a flock for months at a time, as herders have done across the globe since time immemorial.  They manage their own schedule, which is different than other ag workers that work hourly shifts.  Herders take breaks, take time off to have to themselves, and sleep as they deem appropriate while living with the flock.  Sort of like a live-in nanny job.  There are a general number of hours its assumed they work, for which they are paid, but not all hours of the day every day, even though they live on site.  But now, this law that looms large over January 2022 will require just that: of the 168 hours in a week, 40 would be paid at normal rate and 128 would be paid at overtime rate for herders.  This roughly 50% raise for largely unworked hours does not fit into the finances of a sheep operation, given the going price of meat, wool, and/or grazing services.  Nor is it reasonable compensation when compared to the hourly shift work done by most ag workers, for whom this bill is meant to address, and for whom the bill does not result in a 50% wage increase.

To be clear, I am not against the ag overtime bill.  For most ag workers, its reasonable.  Mainly, it adjusts the number of hours worked to qualify for overtime.  For example: instead of requiring overtime pay at 10 hours a day, it requires overtime pay starting after 8 hours a day.  In the past, herders were exempt because they live with the flock.  But in the new bill, herders are not granted exemption.  And so, after 8 hours, they are to be paid at overtime for all the remaining hours in a day.  Which does not make sense.

There is a solution, which has been proposed to the governor, to adopt (specifically for herders) the Obama-created federal standard work week of 48 hours a week (40 of which are paid at regular rate, 8 of which are paid at overtime).  Adoption of this standard would not affect how the law works for any other ag work.  It would quite literally keep California’s wooly fire managers employed, along with their human herders.  All it needs is for the governor to make it so.  But is the governor paying attention?  A letter was sent, signed by a pile of different ag organizations and elected officials.  State senators Anna Caballero and Melissa Hurtado published an article in the Sacramento Bee calling on him to adopt the federal standard for herders.  Its an issue that affects people both urban and rural in California, and it affects our health, safety, and economics as related to risk and damage done by fire. It even relates to reducing carbon emissions and California’s pledge to the Paris Accords, as grazing is not just the only method of fuels reduction that has the potential to sequester more carbon than it releases, its also the only method that is scalable to the millions of acres, often in rocky and hard-to-access areas, that need fuels reduction.  Sadly, our native herbivores are too few to graze these areas as they had done for thousands of years before European contact.

The recent Broiler Fire in Redwood Valley last week serves as an important example of the value of grazing as a fuel load reduction method.  Started at Flow Kana, ironically by a mechanical mower trying to reduce standing fuel load, the blaze destroyed several homes and structures, effectively leaving local families homeless, generating smoke in our air, anxiety in our hearts as we prepared for evacuation, and using valuable firefighter and first responder resources.  The year prior, Flow Kana employed local grazier Ruthie King to manage their vegetative fuel load, but canceled their agreement in early 2020.  Their reasoning was that it cost less to use mechanical mowing – which ended up starting the fire.  I hope that in reviewing the actual long-term costs to them and to the community Flow Kana decides to bring grazing back to the land they have taken responsibility for maintaining.

But back to the sheepherder wage issue: we still haven’t heard a response from the governor’s office.  Meanwhile, the January 2022 freight train approaches, like an old-time vaudeville sketch, with the sheep industry tied to the tracks.  And one of our best methods to prevent catastrophic wildfire along with it.

The preceding article was an opinion column, or letter to the editor, and the opinions expressed therein are the author’s, not those of The Mendocino Voice. It was not necessarily edited for punctuation, capitalization, spelling etc. While, we reserve the right to copyedit and fact-check opinion pieces, and letters to the editor — and to annotate such pieces with fact-checking — we do not habitually do so.