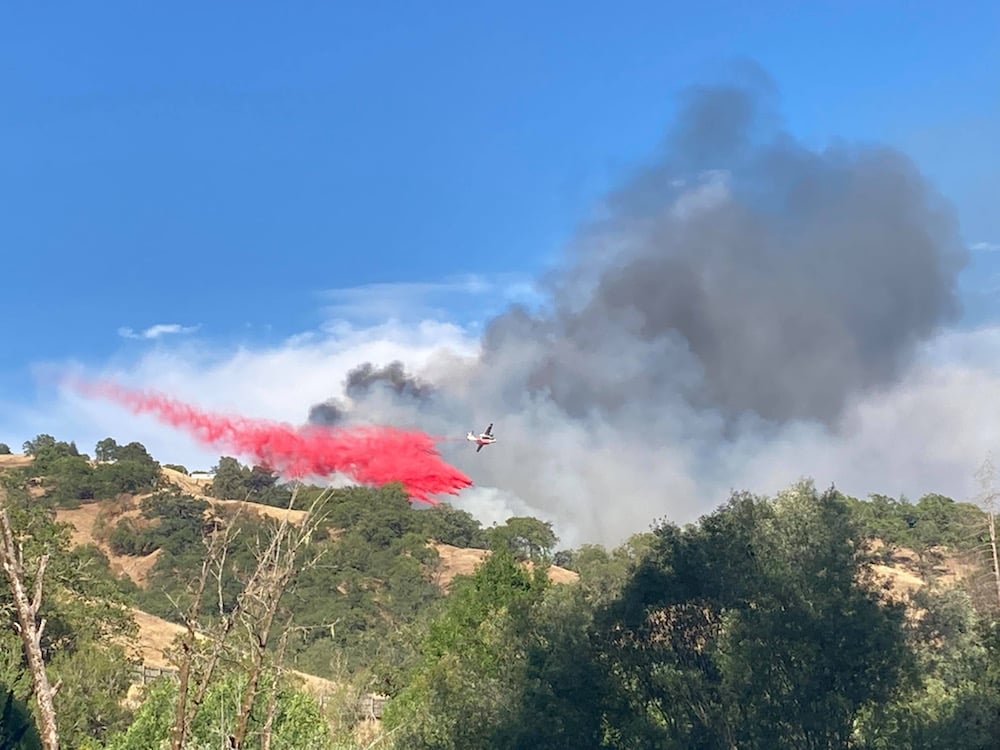 Retardant being dropped on the Bart Fire, photo by Evelyn Fisher

UPDATE 7/30/19 — The Bart Fire is 100% contained as of Friday morning, according to Cal Fire, thanks to the work of fire crews who remained on the scene over night putting in containment lines and extinguishing hot spots. On Thursday evening, the fire was reported to be approximately 20 acres in size, but due to updated and more accurate mapping, Cal Fire has put the blaze at around 13 acres as of this morning. Fire crews will remain on the scene over the next several days as a precaution.

UPDATE 7:10 p.m. — The Bart Fire is no longer posing any threat to structures, although one outbuilding has been destroyed. Fire crews will remain at the scene to build containment lines and monitor and extinguish any hot spots. There are currently 138 personnel assigned to the fire. Here’s the update from Cal Fire Mendocino.

UPDATE 6:55 p.m. — At least one outbuilding has been destroyed and one structure remains threatened, but the Bart Fire remains holding in size at 20 acres, according to an update from Cal Fire Mendocino Unit Public Information Officer Tricia Austin.

UPDATE 6:45 p.m. — The Mendocino County Sheriff’s Office has sent out a notification asking people to maintain situational awareness and to avoid the area if possible — however, there are still no evacuation warnings or orders being issued. According to Cal Fire Mendocino Unit Chief George Gonzalez, the fire has reached 20 acres but crews are making good progress and some air craft are now being released.

Firefighters across the county are also responding to several new fire reported, including one in the center divide near Highway 101 and State Route 253 in Ukiah, where crews are at the scene. The Mendocino County Sheriff’s Office has sent out a notification asking people to maintain situational awareness and to avoid the area if possible — however, there are still no evacuation warnings or orders being issued.

UPDATE 6:10 p.m. — The fire is still at 10 acres in size, but is now being characterized as a “slow rate of spread.” The smoke is visible from the PG&E Alert Wildfire camera network here.

UPDATE 6 p.m. — Some residents in the vicinity of the fire are being asked to evacuate, but so far no reverse 9-11 evacuations orders have been called. Additional crews are on the scene including from Cal Fire and a number of local departments in the area.

WILLITS, 7/29/21 — Fire crews are responding to aa vegetation fire on Black where structures are threatened. According to scanner traffic, the fire is ten acres but currently at a moderate rate of spread and minimal wind. There is an air response and fire crews on the scene, with additional crews on the way. The fire is located at the intersection of Ridgeview Road and Black Bart Drive south of Willits.

As of 5:45 p.m. scanner traffic indicates there is no current need for a reverse 9-11, according to crews on the scene.

The fire is being called the “Bart Fire”* and was first reported at 5:20 p.m.

*Editor’s note: this article originally referred to the fire as the “Lake Fire.”