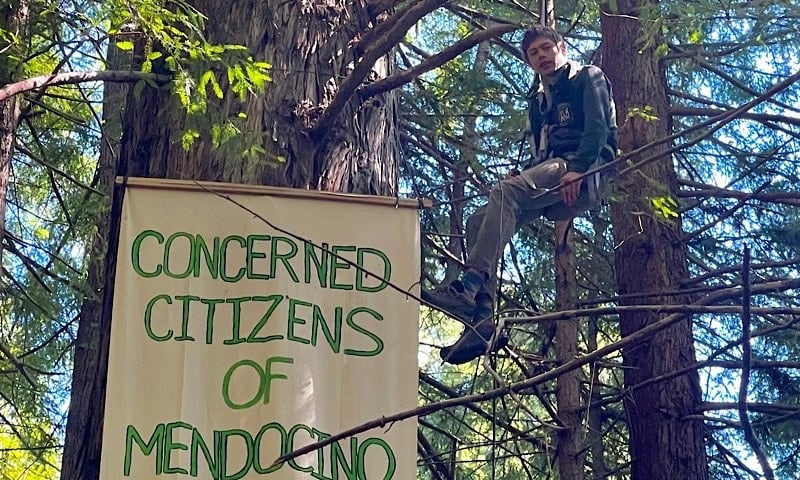 JACKSON STATE FOREST, 4/13/21 — Early Monday morning a group of about 50 protesters gathered on a logging road that leads into Jackson Demonstration State Forest near Caspar, planning to barricade the road in the hopes of keeping loggers working on a Cal Fire timber harvest plan from entering the forest and potentially closing the road themselves. This pre-dawn protest joins the already active tree-sit happening in Jackson, as the latest move against Cal Fire’s timber harvests in the forest, which is owned and operated by the department.

The action is a significant escalation in the struggle over the future of large tracts of redwood ecosystem within the demonstration forest. Protesters say that they are, as of now, primarily asking for a return to the active discussions, and a pause to the logging. However, due to the decentralized nature of the protests, no single set of demands has been offered, but at least some groups are calling for the entire western portion of the Jackson Demonstration State Forest to be re-designated as a preserve, rather than an active working forest.

The protests follow months of discussion between Cal Fire, local conservation group the Mendocino Trail Stewards, and the Coyote Valley Band of Pomo Indians. But the situation came to a head on Thursday, when Mike Powers, Cal Fire forest manager for Jackson, announced that the department (Cal Fire’s full name is the California Department of Forestry and Fire Protection) would be moving forward with six timber harvests. Mike Powers is away on vacation and could not respond to The Mendocino Voice in time for publication. That day Cal Fire announced the “immediate” closure of those sections of the Forest along with roads leading to them.

However, as of Monday, no active closure measures had been put in place, and activists and recreators alike continued to travel freely into the forest, including to the so-called “Mamma Tree,” the central site of a tree-sit that has been mounted to counter the logging plan.

Though Jackson is often treated as an ordinary state park by locals — a place to hike, bike, forage, and enjoy nature — Jackson is not a park but a working forest. Much of the land that makes up Jackson was bought by the state of California from private owners in 1947, and Cal Fire is legally mandated to log the forest as a way to demonstrate best sustainable forestry practices.

So, in contrast to protests concerned with forestry regulations on private timberlands, this dispute centers on competing visions of how to manage and use state owned public land, with protesters broadly envisioning something closer to a state park, a piece of land set aside for ecosystem restoration, recreation, and carbon sequestration and Cal Fire maintaining it’s traditional view that the forest exists a model for the logging industry in California.

“The tragic misunderstanding is that we’re being perceived as a commercial timber company,” said Eng. “We are an experimental forest. We harvest timber as part of our overall mission of research and science. That’s the misunderstanding that hasn’t been resolved yet. I think it’s telling that this particular logging operation that is controversial is very conservative. We are harvesting less than 10% of greater than 48-inch [diameter at breast height] trees…So we are removing trees from every size class including the large ones but just 10%. We remove the few to retain the second growth working forest rather than having the whole forest grow into old growth.”

At 4:30 a.m. Monday morning, under breathtaking, starry skies, around 40 people gathered on Caspar Orchard Road in anticipation of logging contractors, working under Cal Fire, moving into the forest and possibly closing roads. Specifically, Monday’s protest was concentrated on opposing the “Caspar 500” logging plan, which would log over 500 acres in the Caspar Creek watershed.

The Monday morning protesters were mostly concerned residents of the Mendocino Coast and they are not officially sponsored, backed, or organized by any specific organization or group. However, Earth First! provided training to some.

What’s shaping up in email chains, zoom meetings, and on the logging roads of Jackson is a conflict over how to manage Jackson, about what to do with public land, and perhaps touching on more fundamental concepts regarding the human relationship to nature.

“There are so many layers of value and meaning to this land,” said activist Spruce (a pseudonym), 25, who was born and raised in Mendocino. “And timber harvests are the most shallow and least beneficial to our narrow community and the larger human community.”

But Eng, of Cal Fire, would argue that timber harvests could wind up one of the most important uses of the land for people who live near and far from the forest.

“We have a mandate to do what we do, and I for one like to believe it’s God’s work,” said Eng. “It’s a little bit of an ecological fallacy to assume that setting the forest aside as a reserve to grow naturally is the best thing for the forest. Big Basin State Forest burned after being set aside. The old growth burned down. In Jackson we are finding out how to make forests more resilient against wildfire and climate change and to throw that away and not to have an idea of how to manage forests in the face of climate change would be irresponsible and naive.”

It should be noted that reporting by The Associated Press found that many of the old growth redwoods in Big Basin survived the vicious CZU Lightning Complex fire that tore through the park this past Summer. Although many of the parks historic buildings were turned to ash, the parks ancient redwoods, some as old as 2,000 years, proved their resilience to flame.

On Caspar Orchard Road, bundled up in puffy jackets and sweaters, cradling coffee cups, and passing around homemade muffins and pears, protesters mingled, trying to stay warm and quietly chatting with their companions as they waited for Anderson Logging, a Fort Bragg based logging contractor, to arrive with their logging trucks.

Various protesters called out to prepare each time the sound of a car coming down the gravel road could be heard in the distance, or when headlights broke the dark knight. But the loggers never came, which, according to Spruce, was the point.

“We wanted to make sure we were here in case the loggers showed up,” said Spruce. “They have not, which was what some of us expected. We were hoping and we were right that the thought of us would be more hassle than they wanted to deal with.”

Eng said that was to be expected.

“I think that they are a little confused on the timeline,” he said. “We still have Northern spotted owl surveys. When those are completed I expect it will be at least next month until operations start.”

For around a year, groups of concerned residents and out-of-town allies have been fighting for more say in the management of Jackson Demonstration State Forest, a roughly 50,000 acre section of public land between Willits and Fort Bragg.

The Mendocino Trail Stewards have been moving through administrative channels such as writing public comments, and political routes such as starting petitions and writing letters in an effort to make their voices heard and have their requests for a one year moratorium on logging, a 20,000 acre reserve in the west side of Jackson, and a mediated discussion between themselves and Cal Fire, realized. Although they are not involved in the more recent actions taken, they have offered their approval of them.

“The Mendocino Trail Stewards stand 100% in support of the right of young people to protect California’s publicly owned forests from logging,” wrote Chad Swimmer, president of the Stewards, in a press release. “While we, as an organization seeking legislative change, can’t condone illegal actions, we would like to stress that the tree sits taking place now and the demonstrations that are planned for the coming days show clearly that the formal channels of public input on the management of [Jackson Demonstration State Forest] are insufficient.”

The Coyote Valley Band of Pomo Indians has also been pressing the issue. Back in February they requested a government-to-government consultation between themselves and Cal Fire, a process which recognizes the tribe’s true nature as sovereign nations, to discuss concerns they have over Cal Fire’s logging plans, some of which involve their ancestral territory.

But on Thursday, when Cal Fire announced that they would be starting their logging projects before following up on discussions with the Stewards and the Coyote Valley Tribe, what had previously been a conflict dealt with largely through administrative procedures, gave way to more active forms of protest.

Although the three groups currently opposing Cal Fire’s management of Jackson — the Stewards, the Coyote Valley Band of Pomo, and the new group of people organizing the tree sit and yesterday’s protest — are all using different means, they have the same end goal: to have their voices heard and concerns addressed by Cal Fire and to stop the logging of large second growth trees in Jackson.

“We’re not here for conflict,” said Spruce, who attended this weekend’s tree sit and Monday morning’s protest. “We’re here to make sure these trees aren’t cut down and to make space for these conversations to happen,” she said, referring to mediated discussion and the government to government consultation.

For many participants in Monday’s early morning protest, this isn’t their first trip around the block. Far from it. Redwood Mary (also a pseudonym)*, 67, has been protesting Cal Fire’s actions in Jackson Demonstration since the 1980s. “I can’t believe we’re still fighting this,” she said to her friend, Button Quinn, who has also been involved in protests against Cal Fire logging for decades. “I feel sad that we have to still be doing this. It just breaks my heart that we haven’t been able to solve this.”

Mary and Quinn lamented that many of their old companions they had protested with years ago had since passed away.

Weaving in and out of small groups of neighbors and friends as the sun rose, snippets of conservations about Judi Bari, the famed environmental activist who organized Redwood Summer over logging redwood trees, could be heard.

When blue sky replaced the starry one, protesters started dissipating, many off to work for the day. But in the forest, the protest continues. There are now two tree sitters perched 50 plus feet off the ground, protecting second growth trees that are over 100 years old by attaching themselves to them.

Greasy Pete, 18, and Bugs, 25, are each settled on platforms in the air, strapped in with harnesses. Pete, who is a senior at a local high school, began his tree sit on Thursday, before Cal Fire’s announcement about their expedited logging plans. Bugs, who is not a resident of Mendocino but is an active ally to the movement, joined Pete in a neighboring tree on Sunday.

This fight between conservationists and loggers over how to manage redwood trees is generations old, as was evident at this morning’s protest, as participants reminisced about forest actions through the ages.

Those that have been around longer are excited to see that a new generation of activists is taking over.

“I’m thrilled there’s young people here that really care,” said Mary. “It’s the next generation that has to carry the work forward. Some of us just can’t climb trees anymore.”

Adrian Fernandez Baumann contributed to reporting for this story.

*”Redwood Mary” is an occasional contributor to The Mendocino Voice