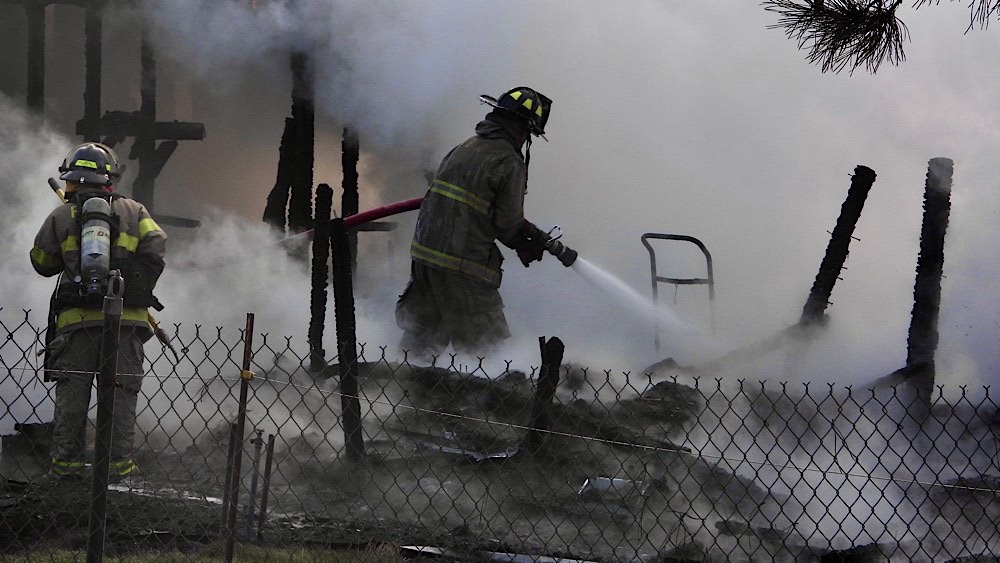 FORT BRAGG, 1/22/21 — Quickly responding Fort Bragg firefighters put out a large structure fire on Tregoning Drive that started in an outbuilding and spread to a nearby garage, this afternoon. The first group of volunteers arrived within minutes. With the help of a man on the property they managed to rescue vehicles and equipment from the garage before the fire spread fully, said Fort Bragg Fire Chief Steve Orsi. Orsi said no people or animals were hurt in the fire, though he noted both buildings were a loss. Other nearby buildings were saved from the spread of the fire, including the house.

The call came in at 3:05 p.m., with 20 Fort Braff firefighters wading in and controlling the fire within minutes. The firefighters were visible working inside and outside the structures in heavy smoke, knocking down hot spots and keeping the fire away from lots of equipment and other buildings.

The fire happened on Tregoning Drive, on the east side of Highway 1. The area has many structures nearby with Pomo R.V. Park and Campground the neighbor up the road. People gathered along SR-1 from another nearby campground and mobile home park to watch as flames climbed into the sky. The plume of smoke could be seen from downtown Fort Bragg, three miles away. The cause of the fire, believed to be accidental, is under investigation. An earlier version of this story misspelled Tregoning