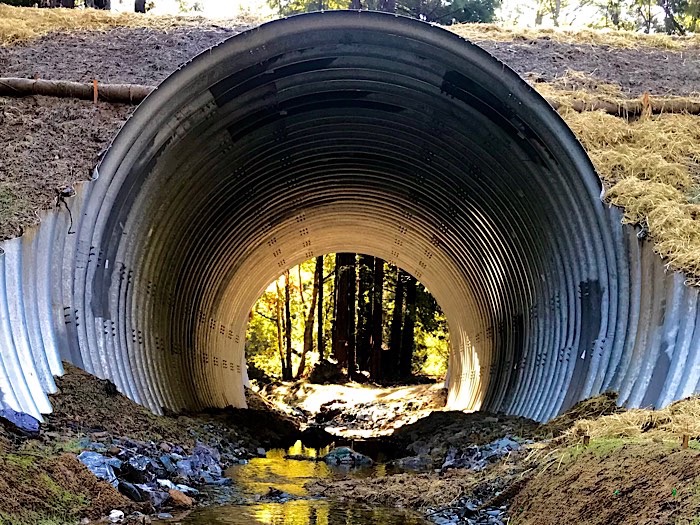 Coho salmon habitat restoration along a tributary of the Noyo River near Irmulco California. (Lana Cohen / The Mendocino Voice)

IRMULCO, 1/23/21 — The Noyo River, Pudding Creek, the Navarro. These are just some of the rivers that flow through Mendocino County. Starting from their headwaters in the chaparral hills, they wind down valleys of redwoods and pour out into the Pacific ocean. The rivers running through our county are some of the last left that still host wild California Central Coast coho, a genetically distinct subset of coho salmon, that once flourished in the region, with returns reaching up to 400,000 fish, according to one scientist, and filling rivers from Aptos Creek in Santa Cruz up to the the mouth of the Eel River.

Now, annual fish runs range between one to six percent of historical averages, with only a few thousand fish traveling the rivers each year. Conservationists, fisheries scientists, and fishermen alike hold their breath, waiting to see if the species will make it through another season.

Late this fall, Trout Unlimited completed three projects intended to support the fishery’s survival, replacing old infrastructure along the Skunk Train’s path that was obstructing fish passage. The projects opened up two miles of previously inaccessible coho habitat that Trout Unlimited claims is critical to the species reproductive success, and so ultimately, their survival. Trout Unlimited is a conservation nonprofit that works across North America protecting cold water fish species and the places they need. Here on the North Coast, the Fort Bragg branch works to restore what was once a thriving population of native fish species like coho and steelhead, trying to bring them back up to their previous numbers, or at least further away from the tenuous situation they are in now.

Two miles of creek may not seem like a lot, but Anna Halligan, North Coast project manager for Trout Unlimited, said that it’s these small projects that over time will bring back the healthy and diverse habitat these fish need to make it.

“I think one of the greatest things we can do to help recover this species is to provide them with the most and highest quality habitat we can,” said Halligan, standing next to a small Noyo River tributary. “In an area like this where we still do have wild returns of salmon we have to think about the cumulative effects of lots of small actions and look at how to support this species from a watershed scale.”

The metallic looking silver and blue-green fish is a keystone species, meaning that other species that share its ecosystem depend on them for their survival and that without them, the ecosystem would dramatically change, likely to the detriment of other flora and fauna that live in it. So to be unequivocally clear, they are very important. “Coho are basically the fishery species that helps indicate what the health of your watershed is,” said Halligan.

The downfall of Central Coast coho has had harmful impacts beyond the species and its ecosystem. The loss of Central Coast coho left Native communities which once relied on the salmon for nutrition, wealth, and culture, empty handed, destroying a central pillar of their communities and livelihoods. It also damaged what was once a large and thriving fishing industry along the coast.

Far down in a valley off of the north side of California State Route 20, running underneath the Skunk Train’s railroad tracks, the upper headwaters of the Noyo River flow slowly through a landscape of redwoods, alders, and willows. On a blue-sky day in January, the water was clear and cold as it moved over beds of gravel. At the right time of year, endangered coho travel this river, downstream and out to the ocean to grow big and strong or upstream back to their birthplace to spawn. This is the site of one of Trout Unlimited’s recent habitat restoration projects, which opened up a mile of fish habitat on a tributary named, unceremoniously, Gulch C.

The project was focused on replacing a culvert that was no longer effective and was blocking fish passage. Rather than sitting at water level, so that fish could swim right through it, the culvert sat several feet above the flowing river, creating a kind of cliff, so upstream-bound coho could not make it up the tunnel and swim further into the headwaters. Halligan explained that this happened over years because the culvert in place was too small for the tributary, so when there was a big storm or flood event, water would build up at the upstream end of the culvert, and then rush through, like water shooting out of a fire hose, and push all the sediment and gravel down with it. This lowered the floor of the river bed and created a gap between the surface of the water and the culvert.

“As it erods, the bottom of the culvert begins to become what we call perched,” said Halligan. “Where it’s sitting above the bed of the channel and above the surface of the water. And that creates a big fish jump.” Halligan went on to explain that adult coho can jump around a foot and juveniles around six inches, so anything gap higher than six inches cuts off part of the population. Salmon are infamously great jumpers, but Halligan said this barrier was simply impassable for the fish. “It was a significant barrier, a total barrier, salmon couldn’t get through it.”

Now, Trout Unlimited, has solved that problem by installing a bigger, brand new culvert. The corrugated steel tube is enormous. It’s around 30 feet in diameter and is buried four feet under the stream bed, with gravel running through it to imitate the natural bottom of the tributary. Halligan said that Trout Unlimited actually installed a culvert one size bigger than the engineers they worked with said was necessary. They did this in order to avoid erosion, to ensure that they were creating a long term sustainable solution. Trout Unlimited also oversaw the installation of a single single-lane steel bridge on private timber property where there had previously been another culvert blocking fish passage. Together, the new culvert and bridge, along with all the research, restoration, and worker hours that went into the project cost around $1 million, with most of the funding coming from federal and state grants and all of the actual project management done by Trout Unlimited.

Halligan said that doing these types of restoration projects in places that still have wild fish is crucial to bringing back a secure population of Central Coast coho. According to the California Department of Fish and Wildlife, coho have been in decline since the mid-20th century. “Estimates are that there in the 1940s there were probably 400,000 coho that used to return to California,” said Halligan. In recent years, returns have ranged, annually, between a disheartening one to six percent of historical population estimates. In 2016 (latest available data), mere thousands returned across the fish’s Central Coast range, which spans from near Santa Cruz to just south of Humboldt Bay. Individual rivers saw populations dwindle to the hundreds. For example, the Navarro only averaged 257 adult returns annually from 2011 to 2016.

A variety of factors contributed to the decimated population. “While there is no single factor responsible for Central California Coast coho salmon decline, both human activities and natural events have degraded their habitats,” writes NOAA, in a report. Over the years, reckless agriculture, logging, and other human activities have negatively altered coho habitat. Tree removal has stripped streams and creeks of the trees and that keep their water cool by shading flowing channels from the hot sun. It has also increased sediment flow by removing trees that, if still standing, would soak up water and hold soils in place during heavy rain. Other human practices, such as straightening streams, removing channels and floodplains that fish need for shelter, and pulling water at unsustainable rates for all sorts of uses, have also had harmful effects. “The water that remains can become too warm for young salmon,” writes NOAA, in the same report. “Climate change, droughts, and poor water quality [also] all contribute to this species’ struggle to thrive.”

Despite the harms that human and industry activity have caused over time, Halligan said that timber industry practices have significantly changed over the years due to forest practice rules and the Endangered Species Act, and no longer have the same scope of detrimental impact as they used to. “The operations that occur today are not the same as they were, and there is much more attention being paid to how we workin these sensitive landscapes,” said Halligan. One local timber company, Soper-Wheeler, which owns some of the land where the Gulch C restoration took place, was a financial contributor to the project.

Halligan said the benefits of more thoughtful timber practices are obvious. “The water is getting clearer, the fish numbers are going up. We have some wild returns every year,” she said about the. “There are many places in the range of California Central Coast coho where that doesn’t happen anymore.” For example, the population in the Russian River is only kept alive through a captive program.

The Noyo is one of the stronger rivers in terms of returns, which is why Trout Unlimited and all their partner organizations are putting so much energy into it. “Here [the Noyo] we still have wild returns and it’s in the order of thousands of fish so that’s a big deal,” said Halligan. “We want to take advantage of the opportunity to work in these watersheds where we still do see fish coming back because one of the best things we can do is give them access to more habitat. The habitat isn’t pristine, but it’s not completely broken and we know that because we have populations here still.”

Halligan said that providing more habitat is especially important considering climate change, because the fish need to be able to move if conditions are not suitable for their survival.

The work Trout Unlimited recently completed along the Noyo River is part of a larger mission to bring back thriving coho populations throughout California and the Pacific Northwest. For the California Central Coast coho, the Noyo, along with a few other Mendocino Coast Rivers, serves as a stronghold that Halligan believes could save this genetically distinct unit of coho regionally.

“In the context of greater recovery, the Mendocino coastal streams are some of the more stable and highly productive streams within the range,” Halligan said. “From that perspective recovery here is really important.”

Trout Unlimited is focusing on areas that still have fish, with the stated goal of protecting those populations so that they can eventually expand their range into other watersheds that they historically inhabited, ultimately increasing the Central Coast coho’s resilience to climate change and other potential impacts.

“The Mendocino coast rivers are so important for recovery,” said Halligan. “If we can do as much possible in those watersheds, we have a decent chance of keeping those fish from being extirpated from the California landscape.”