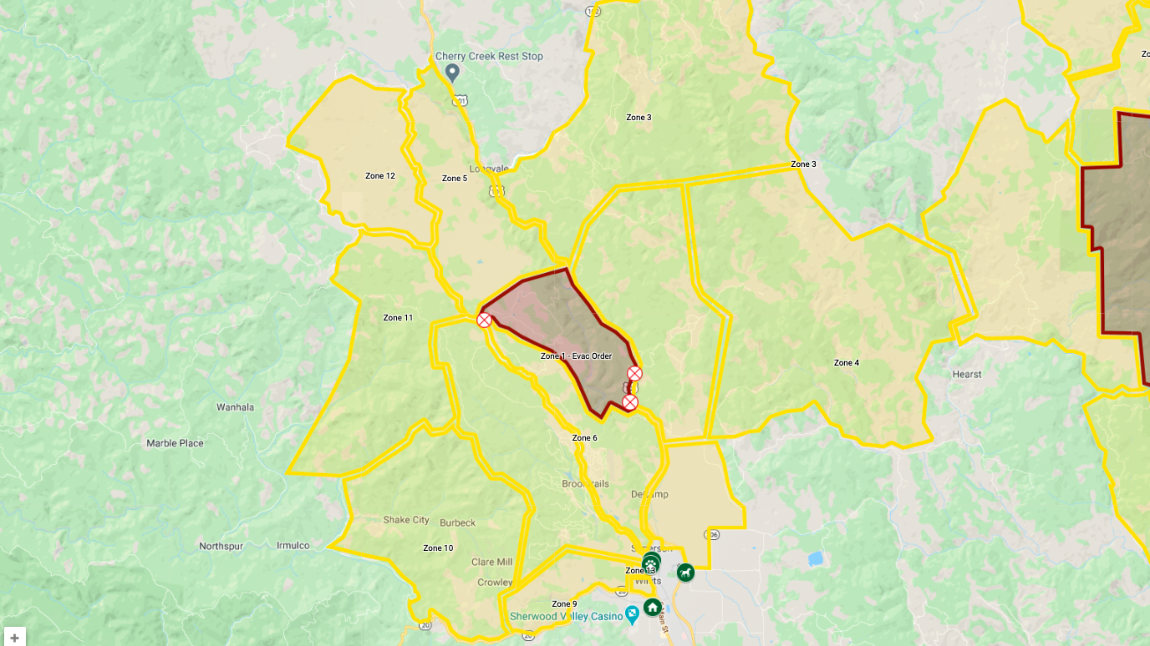 The areas in yellow are under and evacuation warning.

UPDATE, 9/10/20, 9:20 p.m. — In today’s evening update Cal Fire noted that the Oak Fire had grown to 1100 acres despite better conditions. It’s unclear if this additional growth was the result of better mapping, or backfiring efforts, given that the fire has largely come under control, and is now 35% contained even with this additional acreage.

However, the fire agency also confirmed that at least 22 structures were destroyed by the blaze, and a spokesperson said earlier today that Cal Fire’s fire damage cataloging team had not yet arrived, meaning that this number will likely rise. The number of structures damaged was 20.

No one has been injured or killed.

In an evening video presentation by the Cal Fire team, Mendocino Unit Chief George Gonzalez noted that Mendocino County had suffered greatly in the 2017 Redwood Fire when nine people were killed, but that lessons had been learned, and the quick work of local and state firefighting agencies had averted a potentially catastrophic situation.

ORIGINAL 3:30 p.m.
WILLITS, 9/10/20 — The evacuation orders have been lifted and the repopulation of Brooktrails, and other areas north of Willits, has begun. The only exception to this is in the original area of the outbreak of the fire, where firefighters continue to work on fully extinguishing the blaze. That are, called “Zone 6,” from U.S. Route 101, west up to the loop road that makes up 3rd Gate Road and Skyview Lane, and includes Big John Road.

Other areas formerly under a mandatory evacuation order have been downgraded to an evacuation warning, meaning people can repopulate, but should be prepared to leave quickly if the fire flares back up.

Here is the map:

The fire has held steady at 863 acres for several days now, with official containment growing to 25 percent today. But the steadiness of the acreage number means that the fire has been brought under some control days ago, through retardant drops, ground crews clearing brush and “going direct” on the fire, and through the fire burning itself out at existing barriers. The efforts to create containment lines are to ensure that strong enough barriers of bulldozer and hose line exist that were the fire to flare up, or were a smoldering ember to reignite, the fire would not be able to break out of its current boundaries.

However, this quick success in controlling the fire was not a given, and in the early hours after the blaze broke out fire officials feared that it had the potential to become a major catastrophe.

Cal Fire Mendocino Unit Chief George Gonzalez tweeted yesterday, saying, “Extremely proud of our Mendocino and Initial Attack Resources. This fire was Complex [sic], and had a high probability to become a major disaster and burn for several weeks. The fire was kept small, even though it was 104 degrees and 14 percent humidity. Great Job!”

Indeed, Cal Fire recognized the danger of this fire right away, and even in the midsts of major firefighting operations in the area allocated a huge number of aircraft to the fire. At one moment on Monday at least a dozen aircraft were making drops on the fire including the 747 supertanker (which crossed the state to come to Mendocino), and a C-130 Hercules, and other “large air tankers.”

By late afternoon of Monday all of Brooktrails and areas along the 101 were being evacuated, and an evacuation warning had been issued for the northwest corner of Willits.

But these early efforts and the dogged persistence of firefighters paid off. Firefighters arrived from across the state, coming directly off larger fires being fought, to make sure that this relatively small blaze did not get out of control.

And here is the text of the Nixle alert from the Mendocino County Sheriff’s Office:

The Mendocino County Sheriff’s Office and Cal-Fire Incident Management Team 5 is pleased to announce that re-population of the majority of Brooktrails is currently underway.

There is still one area where the Oak Fire actively burned that is still under evacuation order and not able to re-populate at this time. This area is identified as Zone 1 and includes the areas Third Gate Road, Skyview Road, Big John Road, Live Oak Drive, and Ryan Creek Road west of Highway 101.

Law enforcement personnel will remain in the area of Zone 1 and new road closures have been established to protect the community from entering the active fire area. These new road closures are in the following areas / intersections: both access roads to Ryan Creek Road from Highway 101 (north and south) and Third Gate road near the Metzler Ridge Road intersection.

Residents who live on Metzler Ridge Road, accessed by Third Gate Road, are now being allowed to return to their residences. Residents who live on Schow Road are also being allowed to return to their homes. Metzler Ridge Road and Schow Road were previously included in the Zone 1 evacuation order, and are now being reduced to an evacuation warning.

No persons will be allowed to pass the road closures listed above or enter into the areas of Zone 1 due to fire damage. This is in an effort to protect citizens from damage from the fire as efforts are still underway to make this area safe to re-populate residents.

The areas previously identified as Zones 2, 6, and 7 on the evacuation map have now been changed to an Evacuation Warning and residents who live in those areas are allowed to return home at this time.

For additional information, please call the Emergency Operations Call Center at 707-234-6052 or visit the Mendocino County evacuation map (updated regularly) at the following link: https://tinyurl.com/MendoEvac. Please remember to regularly refresh the web page when viewing the map for the most updated information.

The Mendocino Sheriff’s Office would like to thank all citizens and residents impacted by these evacuations for their patience and understanding during these re-population efforts. Please continue to respect the fire crews and emergency personnel in the area by driving slowly and maintaining proper situational awareness. Additional updates to this re-population effort will be released as they become available.