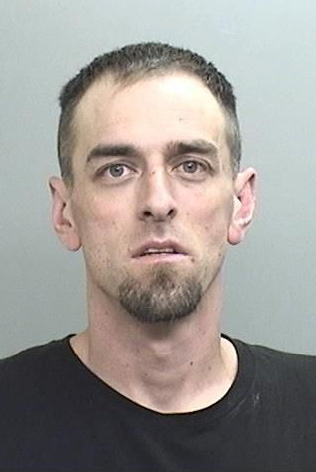 Jameson Jackson the primary suspect in the murder of a man in Covelo, and was still at large.

UPDATE 7:50 p.m. — The suspect in the killing of a man in Covelo is still at large but authorities have lifted the shelter-in-place, which urged residents to stay indoors while the search was ongoing.

The suspect has also been identified as Jameson Jackson, 34. Jackson is likely the same man who was convicted of the murder of Joan LeaFeat back in 2001, when Jackson was only 15. Though we

UPDATE 7:40 p.m. — In a brief interview Sheriff Matt Kendall explained that the suspect was still outstanding. Searches continued through the afternoon and included MCSO deputies, Tribal Police officers, CHP officers, Mendocino SWAT, Fish and Wildlife, and a “UVA,” an unmanned aerial vehicle (colloquially referred to as a drone), and a helicopter.

No new information was available about the deceased.

A brief car chase that occurred in Covelo this afternoon was unrelated to the homicide, and stemmed from a completely separate incident in which a person with outstanding warrants attempted to evade Sheriff Kendal as he drove into Covelo.

UPDATE 1:10 p.m. — Be-on-the-look-out (BOLO) instructions have been issued for a couple of vehicles seen leaving the Covelo area and speeding down the 162, including a Nissan Altima. This information is from the scanner, and the situation is rapidly evolving.

ORIGINAL
MENDOCINO Co., 8/17/20 — One man has has been shot and killed in Covelo, and a second man was shot through the ear. Law enforcement officers from the Mendocino County Sheriff’s Office, Round Valley Indian Tribes Tribal Police, CHP, and Fish & Wildlife are engaged in a manhunt in the area of SR-162 and Biggar Lane, and residents of that area are being urged to shelter-in-place. A Nixle alert and reverse 911 notification have been sent out informing residents of that fact. If you are far from the situation you may have received a Nixle notification, but this situation is happening in Covelo.

The suspect in the killing is described as a white man, about 6’1″ and 180 lbs., with brown hair, wearing blue jeans and a black shirt.

In a brief interview Sheriff Matt Kendall said that Tribal Police had given chase to the suspects, and that in the vicinity of the cemetery a male suspect had bailed from his truck and taken off on foot. A female suspect was detained at the scene. Kendall added that a helicopter is on the scene to assist with the manhunt.

There is no word as to motivation or circumstances surrounding the killing. The deceased is a man, but no other information is available.

Based on scanner chatter it appears that Mendocino County SWAT team is on the way, and may be transported to Covelo via copter.