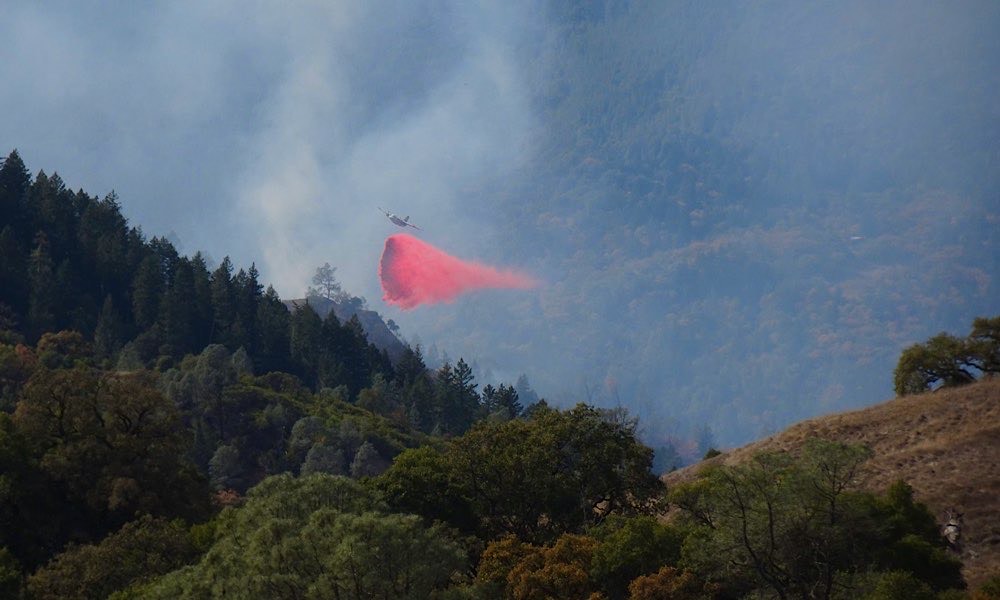 But Mendocino County hasn’t yet reached its peak fire season, which comes later in the year than the peak in southern and inland California. What weather and fire patterns should we expect in Mendocino as summer comes to a close and we move into fall? UCLA Climatologist Daniel Swain provided some answers.

To help predict what weather and subsequent fire risk in Mendocino County might be like as we move into peak fire season on the coast, Swain, who works at the Institute of the Environment and Sustainability at the University of California, Los Angeles, looks at further inland areas and southern California, where it’s hotter, drier, and fire hits first.

Swain explained that the dry winter, early summer heat waves, and consistently warmer than average weather in June and July indicate an elevated risk of wildfire. “The current trajectory is for vegetation to be more flammable than it usually would be,” said Swain. Whether or not we’ll have a warmer than usual second half of the summer and early fall, he’s not yet sure.

Additionally, Swain explained that California has been seeing a pattern of dwindling fall precipitation. “The recent decline in autumn precipitation is fairly consequential,” commented Swain. “From a wildfire perspective, there’s a switch you can flip — dry enough to burn or too damp, no fires. To flip that switch to no fires, you need a big soaking in the autumn. If the onset of winter storms starts later, you extend fire season precisely when you get more off-shore wind. Late onset of rains is pretty consequential because you get an extra month of fire season,” Swain said.

As we know, it was dry this winter. Some extreme heat waves hit in spring and early summer, breaking records in Sacramento and other areas. July has been warmer than average in California, but it wasn’t exceptionally hot, staying just a few degrees above average. However, these small changes in temperature caused by climate change can result in large changes when it comes to extreme weather events, such as wildfire.

Right along the coast, the weather has stayed pretty close to average, with a strong marine influence keeping the area cool.

In terms of fire, Cal Fire has responded to 4,772 fires this year (as of August 2) which burned 94,505 acres. These numbers are much higher than last year, when they had responded to 2,851 fires burning 23,856 acres by the first week in August.

However, this year’s acreage is about one-third of the five-year average of 204,481 burned acres caused by 5,762 fires at this time. Five year averages are highly variably and largely based on larger fires.

“As soon as you get 30 to 40 miles inland all the way to Nevada, that’s where fire risk is elevated right now,” said Swain. “That’s where we’re seeing a bunch of wildfires. There have been quite a few large fires in the northern third of the state.”

“From Mendocino County northward and a little more inland is exactly the part of the state where we thought there would be higher fire risk early because of dryness,” Swain.

A lot of those fires were started by lightning, where ignitions have taken off and become multi-thousand acre wildfires in areas with extremely dry vegetation that experienced a dry winter and a warm spring.

When fire season peaks, in the fall, Swain expects that elevated fire risk to increase closer to the coast. “From a fire risk perspective, the things we already know to be true are that last winter was really dry and that vegetation is drier than it usually would be at this time of the year,” commented Swain.

“The western slopes of the southern Sierra and the San Francisco Bay area haven’t had a lot of fire yet, but we haven’t reached peak season. Really, the central focus of the wildfire activity has been exactly in this region of highly anomalous dryness in the northern third of the state and a bit inland,” he said.

Touching on the larger influence of global climate change Swain explained, “The most obvious thing is that it’s warmer most of the time now than it used to be…not just in the summer, not just in the winter.” Importantly, the warmer weather melts the mountain snowpack earlier, which matters because then hot air can draw more moisture out of the soil, taking it away from plants. With less moisture, the plants are more flammable. “Even precipitation aside, warming temperatures change the level of moisture in ecosystems and alter wildfire risk,” Swain noted

But, even in a typical year, the warmest months along the California coast are September and October. This late season heat comes as the onshore winds that bring cool, moist air in from the ocean, start to reverse themselves and are replaced by offshore winds, which blow hot, dry air from inland out to the coast. These drying winds combined with warm temperatures increase wildfire risk closer to the Pacific, causing the fall peak in fire season. While the height of the fire season usually starts to dwindle down in August in further inland California, the peak is usually just beginning closer (within a few 10s of miles) of the coast around the end of August.

“To a certain extent, that’s usual, but this year we also have this legacy of the super dry winter that preceded it [spring and summer] especially in the northern third of the state,” said Swain. “I think that will play a big role in September, October, and November.”

In addition to following inland patterns to predict what will happen on the coast, Swain takes into consideration atmospheric and ocean conditions. For example, he pays attention to the Pacific Ocean, looking at where it is unusually cool and unusually warm. This year, he said, “There is an elevated change of a La Niña, an unusually cool blob of water.” La Niña events bring cooler, drier weather to southwestern portion of the United States, including Mendocino.

“It’s not a slam dunk, not a done deal, but it would increase the likelihood of a greater fire season,” said Swain of the possible la niña event.

Over the phone, Swain mentioned that it’s not yet clear that we will see a particularly hot second half of the summer. However, because there is no chance of a widespread soaking rainfall happening any time soon, the level of dryness in California will continue to increase for the next few months.

He added that this is what happened with the Camp Fire, where the late start of the rainy season coincided with warm temperatures.

“Subtle changes in seasonality and subtle warming trends combine to produce not at all subtle effects when it comes to wildfire,” said Swain.