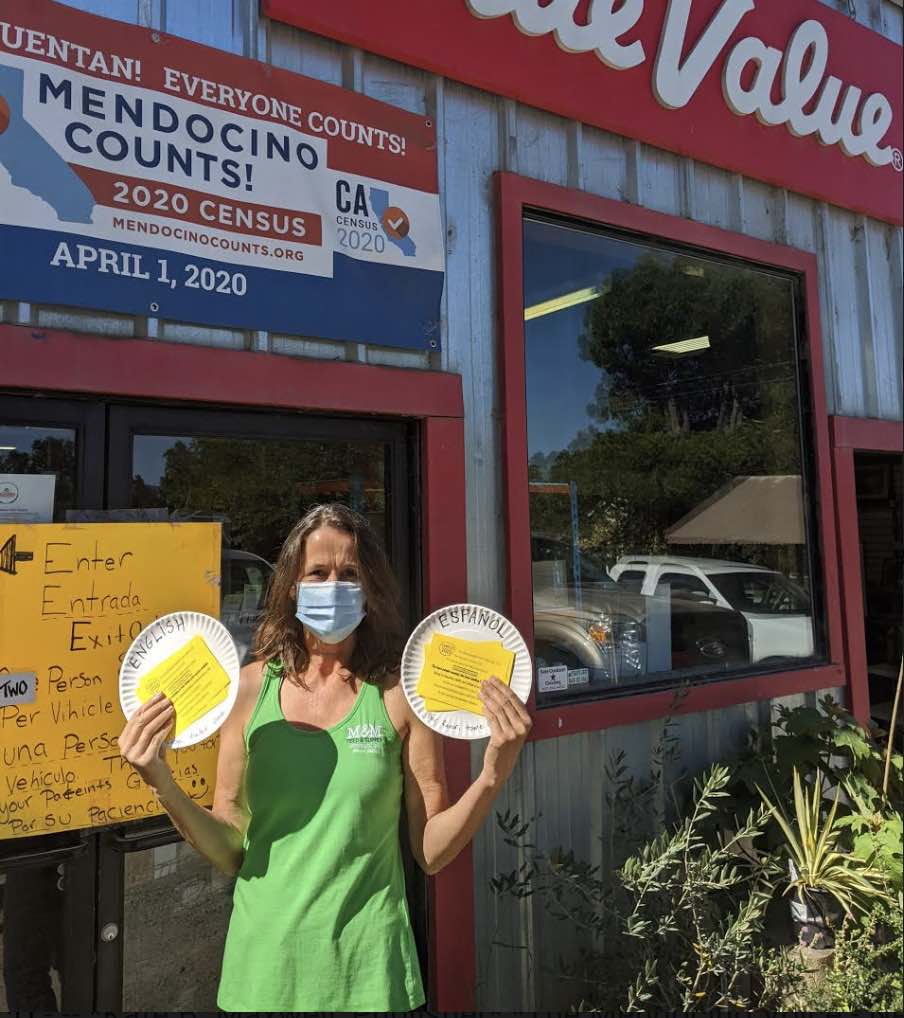 MENDOCINO Co., 8/14/20 — The Mendocino Counts Committee has been working over the last 18 months to ensure every county resident is counted in the census, a number which is key to determining how much the county receives in federal funding allocated towards everything from public health programs, to school lunches, and road repairs, as well as proportional representation in county government, Congress, and much more. This year’s census effort has looked very different because of the pandemic, but without an accurate count of how many people actually live in Mendocino County, we could lose out on around $10,000 per person towards essential community services over the next decade, according to the Census Bureau’s estimates.

Census counts are what are used in order to ensure Mendocino County is allocated proportional resources for roads, schools, electoral representation, public health funding and more — so making sure everyone fills out the census makes a significant difference in local services and the economy. The count is not limited to citizens — instead, under the Constitution the census is an attempt to count everyone living in the county, from infants to the elderly, regardless of immigration status, place of birth, or property ownership.

Last week, the deadline to collect census responses was moved up to September 30, meaning there is even less time to get a complete count. Enumerators, residents of an area who are hired each decade to knock on the doors of people who have not completed the census, have been delayed this year due to COVID-19 safety measures, but they will be going out to knock on doors this week. Filling out the census now will save them time, and help ensure the count of county residents is as accurate as possible.

By law, all census answers are confidential — your responses can not be used against you, and can not be shared with employers, immigration or law enforcement officials. The U.S. Census is required to keep information confidential so it cannot be tied to individual respondents. More information about Census Bureau confidentiality can be found here.

In Mendocino County, beyond the official Mendocino Counts committee, many residents have been working hard to get as many responses completed as possible —- you can check out the current response rates here. However, one national trend this year is that many places that previously had very high response rates, have seen significantly lower rates of response during this year’s census as compared to 2010 and earlier.

In Mendocino, some census tracts, including many on the south coast, a higher proportion of households have responded so far than did in 2010, but there are still many residents who have not filled out census, and most tracts in the county have yet to reach a comparable number of census responses as were collected by the same time of year in 2010.

There are three easy ways to complete the 2020 Census and make a difference today, and here’s where you can learn more about the Mendocino Counts effort.

The census answers are quick and can be filled out in five minutes or less — and personal information must be kept confidential by the Census Bureau. In order to get a complete count, all households, regardless of immigration status, need to complete the survey by the final deadline set by the federal government to collect responses, now set to September 30.

There is still time to respond to the 2020 Census!

The U.S. Census Bureau (USCB) recently announced that they will stop collecting responses one month earlier than previously planned, with the new closing date of September 30. Despite this, the Mendocino County Complete Count Committee (MCCCC) wants to remind people there is still time to respond to the 2020 Census. Education, healthcare, and wildfire protection spending over the next 10 years are just some of the areas impacted by Census data. Filling out the Census is the first step in helping Mendocino County prepare for a brighter future.

It is in this spirit we wanted to highlight some of the local individuals who have partnered with MCCCC and have reached out to their networks to encourage them to respond to the Census. We know that friends trust friends more than anyone else. That’s why community influencers make a difference for causes they support. Here are just some of the stories that emerged, making us proud of the caring community we live in.

Devon Jones, Executive Director of the Farm Bureau of Mendocino County, shared the Census via the organization’s email and social platforms to reach county-wide.

In Covelo, Jessi Alvarado of Full Circle Trading Post created a lively video showing friends how to complete the Census and MaryLou Mileck of True Value Hardware created flyers for her feedstore counter and displayed a Census banner at the entrance.

Farmer and co-owner of Penny Royal Farm in Boonville Sarah Bennett and colleague Joslyn Thoresen responded about the Census, “We can include something in our next farm box email.” The area also got a boost in Census activity from community members including Fabi Cornejo of Anderson Valley Health Center, Val Muchowski of the Mendocino Women’s Political Coalition, and Courtney Bailey of the Anderson Valley Food Bank and Giving Tree Farms.

Edenia Maldonado is a nursing assistant who reached out via text to her Hopland network about the Census. Julie Golden of the Golden Pig Restaurant and the Hopland Municipal Advisory shared on her Facebook and to 10 area representatives.

The Census has also gathered steam on the Mendocino coast through the tireless advocacy of Javier Chavez of Redwood Coast Medical Services and Board Member of the South Coast Latino Coalition, Paula Cohen of the Community Foundation, and Cindy Plank of the League of Women Voters, among others.

All of these efforts are intended to drive Census participation before the USCB begins their Non-Response Follow Up (NRFU) operation starting August 11. During that time, USCB enumerators will deploy across the county going to homes that have yet to complete the Census form.

There are three easy ways to complete the 2020 Census and make a difference today.

For every person left uncounted, Mendocino County could lose $1,000 per person each year for the next ten years. Take the Census now to and help us Make Mendocino Count!

For more information on the 2020 Census or to get involved, visit www.mendocinocounts.org or email Paloma Patterson, [email protected].