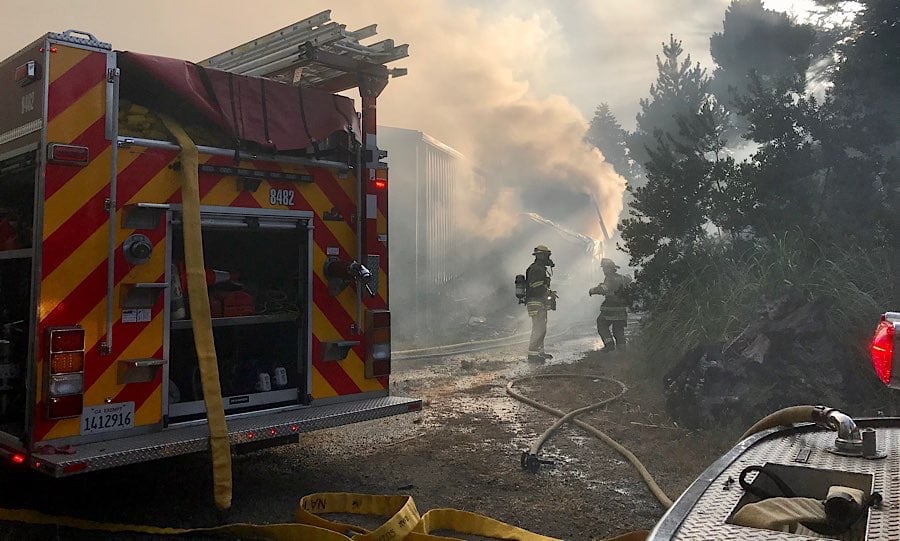 UPDATE 9:17 p.m — Firefighters are holding the fire — letting it burn while keeping it from spreading into nearby vegetation. Authorities also confirmed that one person was severely burned in the structure. No specifics on the identify of the person but they are not a firefighter. There were no additional injuries.

“We’re gonna be here all night,” said Jung. Tomorrow, they plan to bring in a bulldozer to cut lines and eventually help clean up the fire.

UPDATE 8:56 p.m. — The firefighters are now gaining control of the fire. Six 2000 gallon water tenders are at the location. The additional water seems to have improved the situation. The smoke is lighter and there is less in the sky. “It looks better from here,” said Jung. “White smoke is better than black, you know what I mean.”

UPDATE 8:40 p.m. — The fire continues to grow. Chief Jung noted that it is feeding on fuel from inside of the large structure, which is filled with plastic and other materials. At this point, the entire building is in flames. Two fire tenders just arrived at the scene to provide more water and additional ones are on their way. Chief Jung still cannot make a prediction about whether or not the fire will spread to the surrounding vegetation, but they are preparing to “cut lines” and run if they deem it necessary. “We don’t want to lose any equipment,” he said.

UPDATE 7:55 p.m. — The fire continues to grow, and its smoke has turned from grey to black. Mendocino Assistant Chief Rich Jung said to our reporter, “We are not winning on this fire as you can see.”

Firefighters are the scene continue to make requests for additional water tenders, and tenders from as far afield as Comptche and Elk are being requested. Sufficient water appears to still be a problem.

One note on the Cal Fire airplanes: Cal Fire planes do not fly at night, so their departure and return to Ukiah should not necessarily be construed as a reflection on the status of the fire, as the planes generally try to get back to base before dark.

UPDATE 7:40 p.m. — Fire fighters believe that the fire has not spread into the vegetation, but thick smoke is obscuring a clear view of the situation.

The fire is burning in a large warehouse type building, perhaps a garage, at a private residence. A firefighter on scene explained that it is an artist’s residence and that as such there have been a variety of different chemicals creating potentially noxious smoke.

Mendocino Fire, Albion Fire, Fort Bragg Fire, and Cal Fire all responded to the incident. Early on there appears to have been a dearth of water, and several water tenders were requested. Copter 101 from Cal Fire was also on the scene making drops. California State Parks and the CHP have also responded.

Said Jung, “Everything around here is bone dry.” A Department of Corrections prisoner hand crew is also on the scene to ensure that fire does not enter the neighbor vegetation and wildlands.

UPDATE 7:15 p.m. — The two Cal Fire tanker planes have departed the scene, returning to Ukiah, but the OV-10 Air Attack plane, which is a spotter plane that acts as air traffic control during a fire remains, presumably to continue to monitor the situation.

Resources continue to travel to and arrive at the fire to ensure that it does not spread into the vegetation.

ORIGINAL
WILLITS, 7/3/20 — A substantial structure fire on the Comptche Ukiah Road, near the coast, has resulted in a substantial response from firefighters including three aircraft from Cal Fire.

According to scanner chatter the fire was being referred to as the Comptche-Ukiah Incident and as of about 6:40 p.m. there had been little to no spread into the neighboring wildlands. However, Cal Fire aircraft, including fixed-winged tankers were continuing to circle to keep an eye out for potential spread.