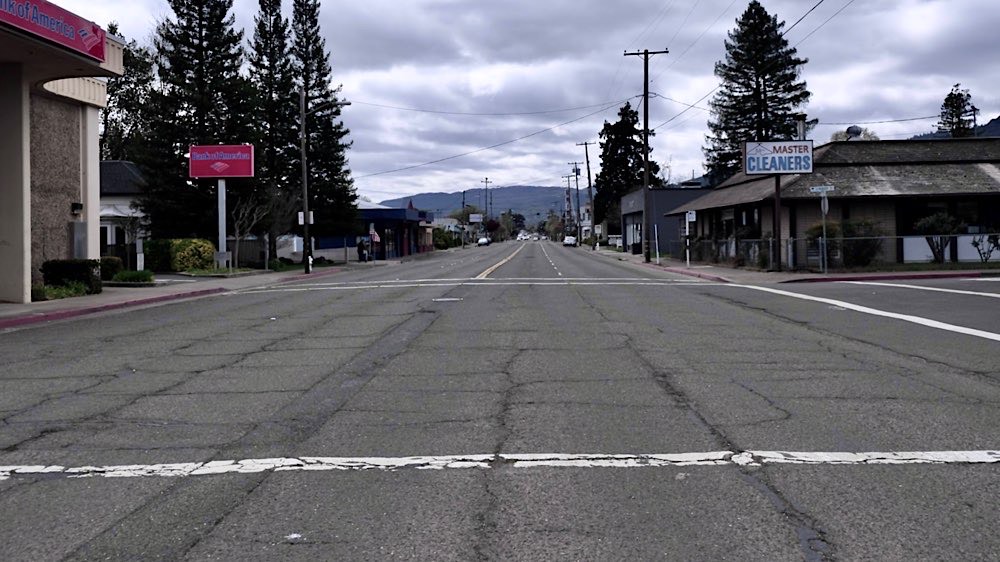 Editor’s note: The Mendocino Voice’s reporting, including our coronavirus coverage, is all free. We believe in providing useful info to our entire community, have no paywalls and depend on our members. Consider supporting our coverage by becoming a member; you can also make a one time contribution. We rely on these generous members to be able to keep informing everyone. Find our most recent coverage here.

FORT BRAGG, 3/25/20 — With the coronavirus pandemic bringing the economy to a standstill and the end of the month approaching, people across the state have been pondering what this means for their monthly rent, and Mendocino County is no exception.

Last week California Governor Gavin Newsom issued an executive order to address the situation, and yesterday the Mendocino County Board of Supervisors took up the issue passing new rules putting a temporary halt to evictions, both of renters and of homeowners by banks. City governments across the county have begun taking up the issue, Willits will discuss it tonight and Fort Bragg has delayed until next week. These measures have by an large been about halting evictions, not requiring an actual freezing of rents.

The governor has suspended certain state level rents and urged local governments to take action to suspend evictions. Newsom’s March 16 Executive Order N-28-20 suspends or adjusts various laws in ways that empowers local governments to take actions that will keep residents in their homes and halt rental housing and commercial evictions and foreclosures.

The governor’s executive order addresses the fact that, “Many Californians are experiencing substantial losses of income  as a result of business closures, the loss of hours or wages, or layoffs related to COVID-19, hindering their ability to keep up with their rents, mortgages, and utility bills.

Newsom’s order identifies housing security and stability as key to protecting public health during this pandemic crisis. Eviction protections that counties and cities are putting into place will be in effect through May 31. The Executive Order does not forgive rents as the order specifies that,  “Nothing in this Order relieves a tenant of the obligation to pay rent, nor restricts a landlord’s ability to recover rent due.”

Yesterday, at their regular March 24 Mendocino County Board of Supervisors Meeting, the BOS unanimously passed an urgency ordinance “Enacting restrictions on commercial and residential evictions in Mendocino County” which is effective immediately through May 31. The ordinance bars evictions, but does not cancel rents — it merely means that people who do not pay rents cannot be evicted, at least through May 31, and potentially for the duration of the crisis. The urgency ordinance stops all evictions due to non-payment (evictions for other reasons might still happen) and applies to both evictions of renters, both residential and commercial, by landlords and of homeowners by banks in the case of foreclosure.

“It prevents that eviction based on non-payment of the rent or of the amount of money that would go to initiate the foreclosure. The person that owes the money would still owe the money, it just prevents the eviction from happening during this period of time,” explained Deputy County Counsel Michael Makdisi at yesterday’s supervisors meeting. The same would be true of renters, who would still be asked to pay rent, but would not be evicted for non-payment.

The supervisors passed the ordinance on an “urgency” basis, in light of the crisis. The state of emergency declared by Governor Newsom has also relaxed some of the provisions of California’s public meeting law, the Brown Act. These relaxations allow for meetings to be held remotely, and for there to be less notice of actions and less public comment. Supervisor Carre Brown voiced some objection to the move to pass this ordinance today as an urgency ordinance, due to not giving the public much notice — but she later voted in favor of the ordinance.

In an interview following the meeting District 5 Supervisor Ted Williams said, “I am hoping cities like Fort Bragg, Willits, Ukiah and Point Arena will follow in the footsteps of the County to enact the same language as enacted by the County. Everyone is out of work. Think about it — with all the mandatory closures and shelter in place orders, how can people hire movers, rent trucks to move, go out and find other housing, rent storage lockers. We can’t be putting people into the streets. The same goes for commercial businesses that are struggling.”

The Fort Bragg City Council held a special meeting last night, March 24. Due to the provisions of the governor’s executive orders that suspend certain requirements of the Brown Act, and with the shelter in place requirements to minimize the spread of COVID-19, the city council members participated by teleconference. The meeting was televised on Ft. Bragg Local Channel 3 and did not include public access call in provisions. City Clerk June Lemos did read several public comments from phone calls, emails and letters to the City on non-agenda items which commented on concerns around the COVID Virus. Comments included questions on how outsiders can be stopped from entering Fort Bragg, can hand sanitizers be placed near the Noyo Headlands Coastal Trail restrooms, and how can the homeless shelter in place if they have no place to shelter.

Council Members Morsell-Haye and Albin-Smith were appointed by the Council to serve on a COVID-19 Ad Hoc Committee. Albin-Smith will chair the committee whose mission is to act as a go between the community and city hall staff.

Fort Bragg City Manager Tabatha Miller, prior to the Fort Bragg Council meeting said, “Our city council is set to get this right and make sure we protect everybody, renters and property owners. We want to wait and see if the Governor will amend the order  as he said in several press conferences. Our City can then enact the Urgency Order on March 31, before April 1 rents are due.”

The City of Willits will hold a special meeting on Wednesday, March 25 at 6 p.m. by telephone conference. The meeting will ratify the declaration of emergency from last week and have a discussion on the executive order and moratorium on evictions. (Click here for info on how to access the Willits Cit Council meeting)

Willits City Manager Stephanie Garrabrant-Sierra said, “There will be a general discussion on what is happening in the city and certainly the Council will discuss the direction they want staff to take on the eviction restrictions. It’s clearly complicated. There are a lot of aspects to it. How tightly do we draw such a moratorium? Will it be for just residential or just for commercial? Is there going to be a carve out?  If the landlord is a senior citizen or on limited income or is someone dependent on rental income to pay a mortgage and what if someone has no mortgage or if there is a small business. There are a lot of things to think about in declaring an eviction moratorium. Do we want to include just nonpayment of rent or breaching the lease, or having conditions. Conditions, for example, where the tenant and landlord have an agreement…”

Cities Around The State Take Action

The cities of Berkeley, Watsonville, Fresno and the City and County of San Francisco have already implemented eviction moratorium ordinances. Other states around the U.S. have begun to suspend landlord-tenant eviction hearings and proceedings.

City of Berkley Rent Board Commissioner Igor Tregub said, “The City of Berkeley adopted the COVID-19 Emergency Response Ordinance, to provide protections to residential tenants against evictions during the declared state of emergency, to preserve the health and safety of the Berkeley community.”

The City of Berkeley’s Ordinance states that “During the State of Emergency, no landlord or other entity shall evict or attempt to evict an occupant of real property for nonpayment of rent by a commercial or residential tenant or default in the payment of a mortgage, if the occupant demonstrates that the inability to pay is due to COVID-19, the State of Emergency regarding COVID-19, or following government recommended coronavirus precautions (collectively referred to and defined below as Covered Reasons for Delayed Payment), or for a No-Fault Eviction of a residential tenant, unless necessary for the health and safety of tenants, neighbors, or the landlord.” The ordinance also stipulates that a landlord may not charge or collect a late fee for rent that is delayed for the reasons stated.

The Ukiah City Council will be taking up the issue at their next regular meeting on April 1. As Sage Sangiacomo, Ukiah city manager, explained there had be some sense in city governments across the region that the state would be taking a more direct action either today or in the near future, and some municipal governments were anxious to pass their own ordinances only to be overruled by the a new state law. However, the governor did not announce any substantial actions on this issue today. The worry about state actions superseding local law likely also contributed to Fort Bragg’s moving the item to their next meeting.

Said Sangiacomo, “The Governor has given a directive to local jurisdictions to look at this issue…He seemed to really request that local jurisdictions take it under consideration and do what’s needed from his perspective.” He added, “Just like Fort Bragg we were in a holding position, because we didn’t want to get out in front of the state.”

Sangiacomo was also at pains to emphasizes that municipal governments are striking a balance between the needs of all their constituents and this historic moment of pandemic and economic collapse. He noted that he has hear many a story of property owners working with their tenants to come to arrangements for the duration of the shelter-in-place order, saying, “I think first and foremost we want to encourage that to happen.”

“We’re looking to encourage those discussions, especially in this rural community…there’s a strong connection between us…and I think we’ll hear more stories of tenants and property owners working together,” said the city manager.

Housing Now! California has taken on the lead to organize a grassroots effort to weigh in on the issues of tenant evictions calling for actions to protect millions of Californians. The letter has already been endorsed by 140+ organizations and two-dozen elected officials.

Information on how to access the Willits City Council meeting:

The Willits City Council Meeting of Wednesday, March 25, can be accessed electronically via GoToMeeting. To participate by phone dial 646-749-3122 Punch in the following access code when prompted: 260 809 485

Please keep your phone on mute, unless you are addressing the Council. Public comment shall be limited to three minutes per person at the time the mayor opens each item for public comments. The agenda can be viewed the Willits City Council Agenda Center.