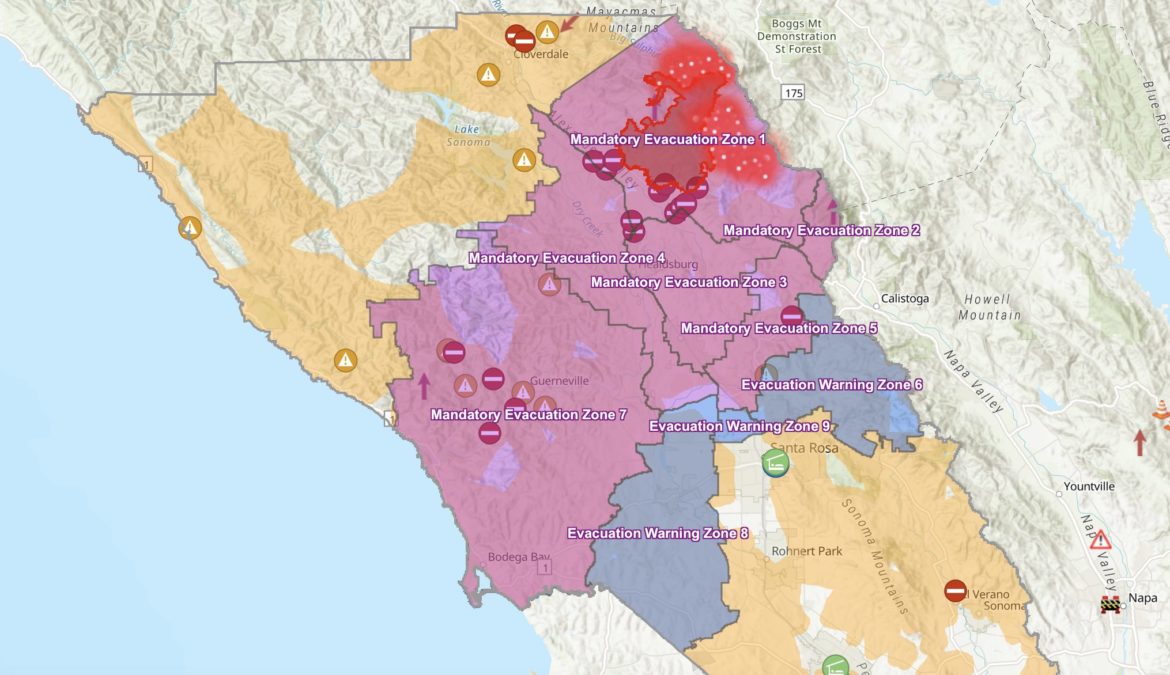 UPDATE 10:45 p.m. — Cal Fire has announced a new evacuation warning for the northern areas of Santa Rosa, saying, “Evacuation Warnings have been issued for the city of Santa Rosa. This includes all areas East of the Western City limit, North of Guerneville Road, Steele Lane, Lewis Road, & Chanate Road, to Montecito Avenue to Montecito Boulevard to Calistoga Road, North to the city limit.”

Here’s the link for most recent Sonoma County map that includes all the evacuation orders and warnings, plus power shut-off zones, and more. Details on evacuation centers and earlier updates from the Kincade Fire can be found below.

UPDATE 7:15 p.m. — There is an evening update on the Kincade Fire, which has grown to 25,955 acres with only 11% containment, according to the 7 p.m. news release, which is more than 40.5 square miles. There are currently 23,500 structures threatened, 77 have been destroyed, and 17 damaged. There are a total of 2,830 personnel on the fire — you can see the full report here. There are also a number of road closures, listed below — however, as of now, Highway 101 remains open.

Firefighters face steep terrain in remote areas, and will continue to mitigate structure threats and find opportunities construct control lines. A Red Flag warning begins at 8:00 p.m. tonight. Winds out of the Northeast at 25-40 mph are forecasted with gusts reaching 70-80 mph. Strong offshore winds and low humidity will create critical fire weather conditions. Unified Command has made steps to notify surrounding communities of evacuation efforts in advance of this weather event.

Here are the current road closures:

UPDATE 6:20 p.m. — Cal Fire has issued an evacuation order, meaning that people need to evacuate immediately, for a huge area of Sonoma County all the way to the Pacific Ocean, including Bodega Bay. Previously these areas were under an evacuation warning, meaning people should be prepared to leave, NOW. Cal Fire is telling people they need to leave as soon as possible.

The areas included are: All areas West of Healdsburg and Windsor, throughout the Russian River Valley to Bodega Bay. Also, Larkfield and Mark West Drainage. Also, Dry Creek Valley including the upper portion of Westside Road & Mill Creek Road.

This is serious, please heed the evacuation warnings, and if you know someone there please contact them. Power shut-offs have begun and so not everyone may have power or access to immediate information. Cal Fire is holding a press conference you can watch at this link

EVACUATION ORDERS & WARNINGS
WHEN: EFFECTIVE IMMEDIATELY
WHERE: Additional EVACUATION ORDERS have been placed for Zone 4, 5 & 7 of
the fire.
Zone 4: Dry Creek Valley including the upper portion of Westside Road &
Mill Creek Road
Zone 5: Larkfield and Mark West Drainage
Zone 7: All areas West of Healdsburg and Windsor. Throughout the
Russian River Valley to Bodega Bay.
Additional

EVACUATION WARNINGS have been placed for Zone 6 & 8
of the fire.
Zone 6: Calistoga Road/Petrified Forest Road to the Sonoma & Napa
County Line
Zone 8: West of Fulton, Graton South to Hessel

This is the 10 a.m. press conference hosted by Cal Fire and various local public officials, it is well worth watching.

UPDATE 2:20 p.m. — There have been a variety of rumors that U.S. Route 101 has been closed — these are FALSE. Both CalTrans and Cal Fire have confirmed that they have NOT close the 101, and do NOT plan to close the 101 in the immediate future, certainly not before the wind event begins. It is possible that tonight, as the winds begin to blow, the Kincade Fire will quickly and dramatically grow and size and burn through or jump the 101. For this reason the evacuation warning area in Sonoma County has been extended to all areas west of Healdsburg and Windsor to the coast.

UPDATE 1:15 p.m. — A new evacuation warning has been issued by the Sonoma County Sheriff’s Office and Cal Fire that expands evacuation warnings all the way to the Sonoma coast. This is not an evacuation order, instead this warning means that residents of these areas should be prepared to leave immediately if conditions become unsafe. This new warning is for “All areas West of Healdsburg and Windsor. Throughout the Russian River Valley to Bodega Bay.”

The 101 through that section of Sonoma County is bumper to bumper, so if you need to evacuate or head south, it’s best to plan for that.

Here’s the pdf with the map of the new evacuation warning on the second page:


UPDATE 12:35 p.m. — State Senator McGuire just tweeted out the message that if anyone in Healdsburg needs to evacuate but does not have a car that they should report to city hall, at 401 Grove St. where buses are waiting. Residents are urged to arrive at city hall by 3:00 p.m.

MENDOCINO Co., 10/26/19 — The entire towns of Healdsburg and Windsor, and the surrounding areas, in Sonoma County are currently told to evacuated after fire officials placed both towns under a mandatory evacuation order as of 10 a.m. this morning. Everyone in those towns is asked to remove flammable materials from near their homes and then leave the cities in an orderly fashion by late this afternoon, before sunset.

Officials are asking the public to take the orders seriously and help their neighbors evacuate. This will all of course be made more complicated by the fact that PG&E is cutting off the power to Sonoma County at 4 p.m.

The Kincade Fire, which is burning to the northeast and east of Geyserville has now reached 25,455 acres, with only 10% containment, and that containment line is mostly in the southwest corner of the fire protecting the town of Geyserville. This means that the eastern flank of the fire is mostly exposed fire line, and with incredibly fast, dry winds expected to blow from the north and northwest tonight, the cities of Healdsburg and Windsor are in critical danger. The winds are expected to begin to slightly die down Sunday afternoon, but will continue to some extent through Monday.

Cal Fire officials held a press conference at 10 a.m. providing a comprehensive update on the situation in English and Spanish, that you can watch here:

Cal Fire has called this a “life threatening situation” and law enforcement in Sonoma County will be going through the areas, knocking on doors and activating a “high-low” siren, as well as staging buses to help evacuate people to evacuation centers in Santa Rosa and Petaluma. Portions of Sonoma County are expected to see power shutoffs this afternoon and officials are anticipating increased wind activity after dark, and they are anticipating that cell service may not be available after the power is shut off, making communication regarding evacuations more difficult.

The full warning is listed below, and an excellent map of the Sonoma County fires, evacuation warnings, power shutoff areas, and more can be found here.

Officials stated that this evacuation is the largest evacuation they have seen in many years, and exceeds the evacuations that happened during the “Wine Country Fires” of 2017.

Here’s the full notice of evacuation warnings and orders.

WHAT: WHEN: WHERE:
EVACUATION ORDER & WARNING EFFECTIVE IMMEDIATELY
Additional Evacuation Orders have been paced for Zone 2 & Zone 3 of the fire.
Zone 2
Hwy 128 North Knights Valley Area to the Napa County Line.
Zone 3
Hwy 101 Corridor from Geyserville South through the town of Windsor. This includes the entire city of Healdsburg and the town of Windsor and all areas East to Chalk Hill Road area.
Additional Evacuation Warnings have been placed for Zone 4 & Zone 5 of the fire.
Zone 4
The Dry Creek Valley West to Forestville.
Zone 5
Larkfield and Mark West Drainage
Residents that would like to receive email updates can follow the link
below to opt-in: https://tinyurl.com/calfireemaillist
To view the most current Kincade Incident map follow this link:
https://tinyurl.com/sonomacountymap
NOTES:
(707) 967-4207
10:00 a.m.