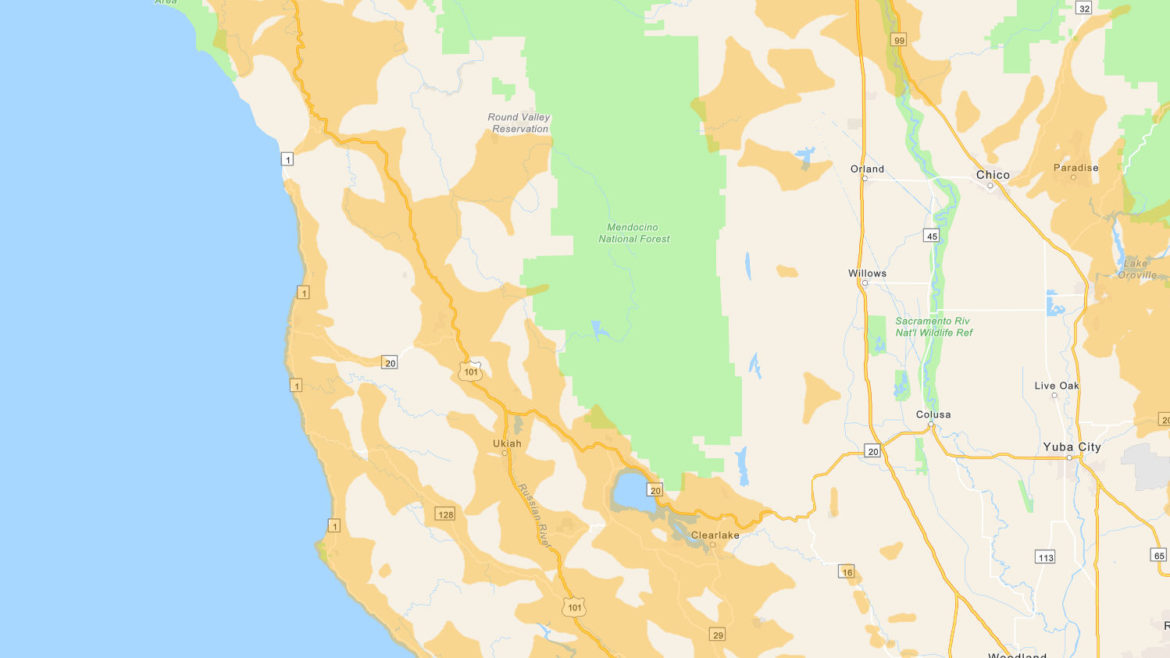 UPDATE 6:40 p.m. — Pacific Gas & Electric has drastically revised their estimate of how many people they will be cutting power to, and now includes the majority of Mendocino County in their list of areas that will have the power cut during this major wind event that is approaching. For anyone who hasn’t heard the news…there’s a major wind event forecasted to occur beginning tomorrow evening, and winds in excess of 60 mph, potentially as high as 90 mph above 4000 ft., are forecasted to hit wide swaths of the state, in tandem with extremely low (potentially single digit) relative humidity.

At a press conference this evening PG&E said that they expect to start shutting off the power at 5 p.m. tomorrow. You can see the continually updated map of the placed expected to lose power here. According to the County of Mendocino:

Previously Willits, Ukiah, Covelo, and and Fort Bragg were not included in the list, but it now appears that the counties main population centers will all lose power. Also, earlier it was indicated by PG&E that only unincorporated areas of Ukiah would lose power, the new map shows the actual city itself losing power. The City of Ukiah has its own electrical gird which is fed by large transmission lines owned and operated by PG&E.

MENDOCINO Co., 10/25/19 — Meteorologist at both Pacific Gas & Electric and the National Weather Service are forecasting a very significant wind event to expected to hit large swaths of California this weekend, and a red flag warning has been issued for much of the North Coast. Extremely dry winds of up to 60 mph, and 90 mph on mountain tops are possible. As a result PG&E has announced that they are planning to shut off power to about 850,000 customers across 36 counties, an action meant to avoid sparking new fires that will leave millions of people in the dark.

The shut-offs are expected to begin Saturday and the weather event lasting through Sunday or Monday. These winds are expected to be stronger than those that prompted the company to shut off large portions of Northern and Central California on October 9. Additionally, Sonoma County has taken the rather extraordinary step of asking people to cancel all events and stay home this weekend presumably to avoid having someone spark a fire.

In Mendocino County the utility company is currently stating that 12,755 customers — that’s a single account, not a person — will have their power cut, included 408 “medical baseline” customers, who rely on power for life-saving medical devices. The latest press release issued at noon Friday by PG&E gives the following list of towns that are expected to have their power cut: Albion, Boonville, Branscomb, Cummings, Dos Rios, Elk, Gualala, Hopland, Laytonville, Leggett, Little River, Manchester, Philo, Piercy, Point Arena, Potter Valley, Redwood Valley, Ukiah, Westport, Willits, and Yorkville. However, it should be noted that Ukiah runs its own power grid and that in the past two planned outage events, which PG&E refers to as “public safety power shut-offs,” Ukiah was mistakenly included in lists of shut-off areas, when in fact PG&E meant to say that customers in the greater Ukiah area, that is people outside of Ukiah city limits who nonetheless have Ukiah addresses, would lose power. It is unclear if this is happening once again, but PG&E’s map doesn’t show the city itself as scheduled to lose power.

Mendocino County has set up a power shutdown page with links to resources and local info at you can find here. The shutdowns are expected to begin between 1 p.m. and 3 p.m. on Saturday, October 26 and continue through at least Monday, October 28, according to a press release from Mendocino County this morning, and will begin in the north then move south.

However, the exact timeline remains subject to weather, wind speed, equipment damage, and when PG&E actually restores power around the state. The larger the showdown event, the longer the restoration may take as PG&E will visually inspect all lines prior to restoring power. The company has requested “mutual aid” of 1,000 workers from other companies to assist with power restoration during this weekend.

The current maps for the shutdown can be found here; PG&E is expected to revise their forecasts over the next 24 hours. You can read our update from Friday morning here. PG&E’s forecast for the next seven days can be found here. The utility company will be holding a press conference at 5:30 p.m. today to provide updates; you can watch on their Twitter feed.

Here’s the full announcement from PG&E:

Approximately 850,000 Customers Notified that They May Be Impacted Beginning Saturday Evening

PG&E will need to turn off power for safety several hours before the potentially damaging winds arrive. It’s important to note that as this weather system sweeps from north to south over a period of two days, PG&E customers across Northern and Central California will feel the effects of hot, dry winds at different times, which means outage times will vary, as well.

The potential Public Safety Power Shutoff (PSPS) is expected to affect approximately 850,000 customers and may impact portions of 36 counties across portions of Humboldt, the Sierra foothills, Western Sacramento Valley, North Bay, and across the greater Bay area, Monterey Bay and northern Central Coast on Saturday, Oct. 26. Customers in the southern-most portion of PG&E’s service area in Kern County could have power shut off for safety on Sunday, Oct. 27.

Predictive data models indicate the weather event could be the most powerful in California in decades, with widespread dry Northeast winds between 45-60 miles per hour (mph) and peak gusts of 60-70 mph in the higher elevations.

Winds of this magnitude pose a higher risk of damage and sparks on the electric system and rapid wildfire spread. The fire risk is even higher because vegetation on the ground has been dried out by recent wind events.

Given the forecast and conditions, PG&E is advising its customers of the potential for a widespread PSPS lasting several days, intended to prevent a catastrophic wildfire. As this intense weather event approaches the service area in the next 24 hours, PG&E’s forecasts will offer sharper detail, noting that the scope may continue to change on the number of customers who will be affected.

Shutoffs Could be Widespread and Extended

As experienced earlier in October, portions of most counties in PG&E’s 70,000-square-mile service area could be temporarily de-energized, potentially including all Tier 2 and Tier 3 fire risk regions. Customers can view the fire threat maps on the California Public Utilities Commission website to know whether they live in one of these high fire-risk regions.

Customers should prepare for a shutoff lasting 48 hours or longer, given the long duration of the wind event. Power cannot be restored until the dangerous weather has passed, safety inspections of de-energized lines are complete, and damage to the system has been repaired.

“We understand that a longer shutoff would be very difficult for our customers. We are already working to minimize the length, including amassing a force of field personnel from PG&E, plus contractors and other utility companies, to be ready to tackle the inspection, repair and restoration process as soon as the weather passes,” said PG&E Corporation CEO and President Bill Johnson.

The company provides direct notifications to affected customers who have given their contact information to PG&E 48 hours in advance of the potential shutoff, and again at 24 hours and four hours before shutoff.

PG&E has not determined whether to move forward with a shutoff, but will continue to monitor weather conditions and provide more definitive information on the potential timing and scale of shutoffs as weather models are updated.

Forecasts and Criteria for Shutoff

“The upcoming wind event has the potential to be one of the strongest in the last several years. It’s also likely to be longer than recent wind events, which have lasted about 12 hours or less,” said Scott Strenfel, Principal Meteorologist with PG&E.

PG&E’s meteorology team is part of a group of fire weather experts and data scientists at the company who work closely with the National Weather Service and the National Interagency Fire Center’s (NIFC) Geographic Area Coordination Center.

The company carefully reviews a combination of many criteria before taking steps to shut off power for safety, including but not limited to:

Forecasted sustained winds generally above 25 mph and wind gusts in excess of approximately 45 mph, depending on location and site-specific conditions such as temperature, terrain, vegetation and local climate.

A Red Flag Warning declared by the National Weather Service.

Working to Minimize the Shutoffs

To help speed inspections and repairs, the company has requested mutual aid of 1,000 workers from other energy companies, including ATCO Energy in Alberta, Xcel Energy in Minnesota and Florida Power & Light. These crews are expected to be staged and briefed on the restoration plan by Sunday evening. If weather progresses as expected, restoration could begin in some portions of the affected area as early as Monday afternoon.

The company and its mutual aid partners will prioritize areas that can be safety restored to bring the maximum number of customers back online as quickly as possible.

PG&E is also working to minimize customer impact wherever possible through a combination of sectionalizing the grid and providing emergency backup power generation resources that will be able to quickly re-energize customers in portions of some cities.

How Customers Can Prepare

As part of PSPS preparedness efforts, PG&E is asking customers to:

Update their contact information by calling 1-866-743-6589 during normal business hours. PG&E will use this information to alert customers through automated calls, texts, and emails, when possible, prior to, and during, a Public Safety Power Shutoff.

Plan for medical needs like medications that require refrigeration or devices that need power.

Keep in mind family members who are elderly, younger children and pets.

Learn more about wildfire risk and what to do before, during and after an emergency to keep your family safe at PG&E’s Safety Action Center.

To support customers in the affected areas, PG&E will open Community Resource Centers which provide restrooms, bottled water, electronic device charging and air-conditioned seating. Mobile resource stations (vans), when available, will provide bottled water, phone-charging and latest information for customers. PG&E is working with counties and cities on locations and will provide the list including operating hours prior to initiating the PSPS.


Here’s the statement form the County of Sonoma:

2 thoughts on “Nearly all of Mendocino County will lose power Saturday, 39,000 customers to be shut off — “historic” wind event forecasted for this weekend with extreme fire risk”