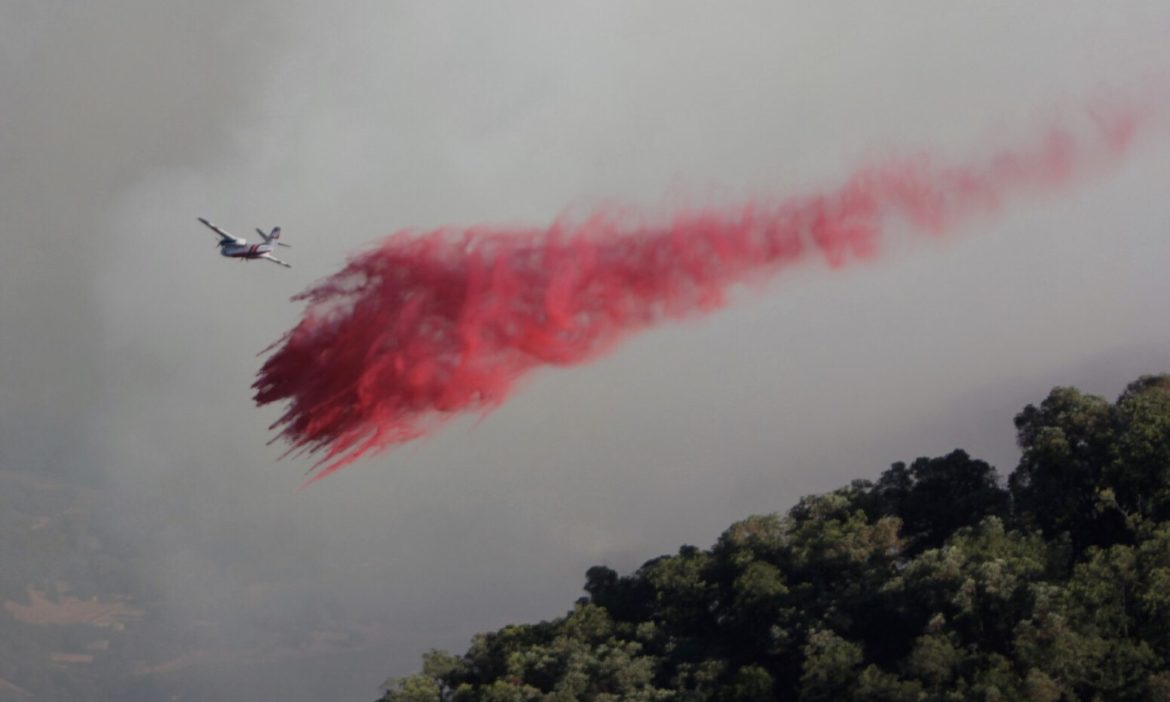 Editor’s note: This is a developing situation and we are continually updating, please scroll down for more details.

UPDATE 8/13/19 — Here is our latest from today, we’ll be updating this new article continuously today so keep checking back:

UPDATE 10:19 p.m. — Cal Fire has released this incident report about the Moose Fire. The fire is burning about three miles west of U.S. Route 101, northwest of Hopland, in an area of high grass and oak woodland. According to Cal Fire there is at this time no threat to Hopland, or the 101, and the fire remains several miles off in the hills. The fire has reached 85 acres and is 25% contained.

Notable from this update are the number of personnel on the fire, 300, and more will be arriving through the night.

And here is an image of Cal Fire flight patterns above the fire, giving you an idea of where it’s located:

UPDATE 7:25 p.m. — More video from the scene of the Moose Fire. In this one Division Chief Paul Duncan describes some of the firefighting efforts:

Cal Fire is now revising down the estimate of the fire’s size to 75 acres. However, the eastern flank of the fire continues to grow, moving toward the 101. Emith Smith, a public information officer for Cal Fire, explaining that the fire may continue to grow through the night, as that eastern flank is in rugged terrain that is difficult to access.

MCSO deputies continue to make efforts to locate and evacuate people, and there are apparently some elderly people who have had trouble leaving the area themselves, as well as some ranchers who did not want to leave livestock behind.

Cal Fire aircraft will stop flying at dusk, and do not fly at night.

The MCSO reminds people that to receive updates on evacuations direct to your phone sign up for Nixle:

For more details on specific areas that are being evacuated scroll down:

UPDATE 7:10 p.m. — Here is a short video our photographer on the scene, Josh Bowers, took, and some photos:

UPDATE 6:50 p.m. — Our reporter on the scene is telling us that the fire has now grown to around 100 acres, according to firefighters on the ground. Additionally, they are saying that it has potential to grow to 500, according to Division Chief Paul Duncan. There are currently six fixed wing aircraft fighting the fire, and two helicopters, as well as 110 ground personnel.

The fire is burning about 3 miles west of U.S. Route 101, northwest of Hopland. It’s western edge is coming under control, but the eastern edge continues to grow. It is burning in high grass and oak woodland.

Additionally, the MCSO is ordering the evacuation of new areas:

UPDATE 6:33 p.m. — At 6:32 p.m. the Mendocino County Sheriff’s Office ordered the evacuation of the the area near the Moose Fire, saying:

We have a little more information about the fire itself. Apparently the first calls of a fire came in at 5:10 p.m. and the fire was reported at only 3 acres at around 5:30 p.m., as of 6:15 p.m. Cal Fire is saying the fire has reached 75 acres, though they still say it has a “moderate rate of spread.”

Currently there are six air tankers and two helicopters making drops on the fire, according to Cal Fire. The fire appears to be moving in a southwest direction, and may soon force new evacuations.

UPDATE 6:20 p.m. — A much smaller second fire has started near Philo. Firefighters are reporting a spot about 30ft by 30ft. However, firefighters have stated that it is small enough that they believe they can control it with just ground resources, and have specifically said that they do not need an air response.

The fire is burning at or near the Hendy Wood State Park, and may have been a bonfire.

ORIGINAL
MENDOCINO Co., 8/12/19 — A vegetation fire is burning near McNab ranch on Moose Rd., between Ukiah and Hopland. As of 6 p.m. the fire had reached between 50 and 75 acres, and Cal Fire was reporting a moderate rate of spread.

The Mendocino County Sheriff’s Office has announced that they are preparing to issue an evacuation order, as of about 6 p.m.

Cal Fire, as well as several local fire departments, including Hopland, are on the scene and battling the flame. At least three Cal Fire air tankers are also circling above making retardant drops.

Earlier the Sheriff put out this Nixle alert:

THERE IS A VEGETATION FIRE ON MOOSE ROAD. AT THIS TIME WE NEED RESIDENTS TO AVOID THE MOOSE ROAD AREA AND IF YOU HAVE VEHICLES ON MOOSE ROAD PLEASE MOVE THEM TO ALLOW FIRST RESPONDERS THROUGH. WE WILL UPDATE ONCE MORE INFORMATION IS AVAILABLE.