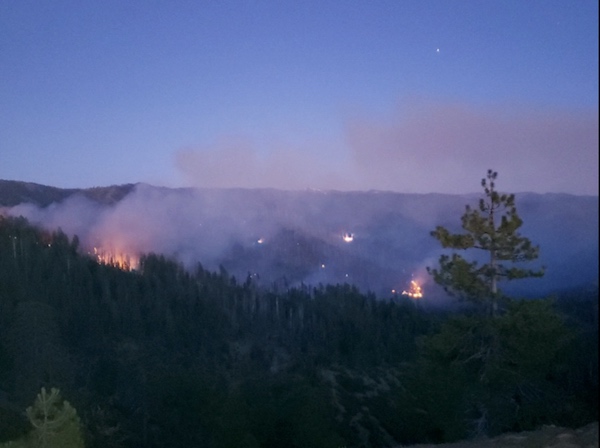 UPDATE: The East Fire grew significantly today, with the evening estimate from USFS putting the fire at 301 acres and no reported containment. The fire is burning in portions of the wilderness that previously burned in 2008.

MENDOCINO Co., 6/21/19 — The East Fire in the Yolla Bolly Wilderness reached 200 acres in size today, a small growth from the previous estimate of 190 acres reported on Thursday by the United State Forest Service. The USFS is managing both the East Fire and the Haynes Fire, now 23 acres and located to the southeast, both of which began as lightning fires late on Monday afternoon. Smoke may be visible in Northern Mendocino, and a red flag warning is in effect for portions of the Mendocino National Forest though Saturday — however, high winds are not predicted for the region containing the fire. Hikers are being asked to avoid the areas near Buck Ridge and Wrights Ridge.

The Haynes Fire is currently 85% contained; the East Fire was previously reported to be 1% contained but no new containment information has been provided. Due to their remote locations, fire crews are being brought in by helicopter, and on the East Fire have identified an area where the fire is being managed and contained using existing paths and natural features. There is a total of 145 personnel on the scene, up from 110 on Wednesday, according to the USFS incident report. The fire is primarily spreading to the southeast and northwest, and containment is focused on ridges to the north.

Here’s the full press release from USFS, below. Our previous coverage of the East Fire can be found here. The USFS has also been sharing photos of the fire and firefighting efforts on their Facebook page.

WILLOWS, Calif. — June 21, 2019 — The East Fire in the Yolla Bolly Wilderness is estimated at 200 acres with little growth reported Thursday. To the southeast, the Haynes Fire is estimated at 23 acres and 80 percent contained. The fires started June 17 approximately 23 miles northeast of Covelo in Trinity County.
There are 145 personnel working on these fires including smokejumpers, Hotshot crews, wildland fire modules, helicopters and support personnel. On the East Fire, crews will continue to reinforce a designated confinement area between East Ridge, Buck Ridge and Wrights Ridge as the fire moves southward. Crews on the Haynes Fire plan to extinguish burning logs and vegetation near the containment lines.
During the morning briefing, Agency Administrator Frank Aebly thanked the crews for protecting wilderness values and having a light impact on the land while they work on the two fires. Crews are using minimum impact suppression tactics or MIST such as using natural barriers where possible, moving or rolling material out of the intended confinement area, reducing the amount of trees cut and minimizing fireline construction.
The weather forecast for Friday into Saturday includes a Red Flag Warning with strong winds for the northern Sacramento valley below 2,000 feet. The gusty winds in the valley are not expected to occur on the East and Haynes fires during this wind event. For the fire area, the weather forecast shows temperatures in the mid-60s with north winds from 11 to 18 mph.
Wilderness hikers are asked to avoid travel near Buck Ridge and Wrights Ridge. Maps and photos are available at https://inciweb.nwcg.gov/incident/6394/.