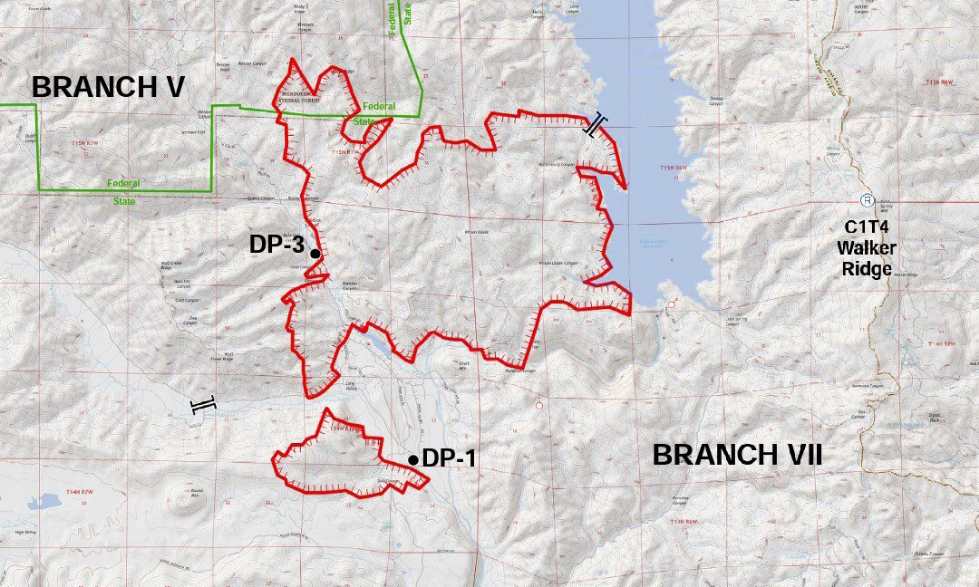 A CalFire map of the Pawnee Fire's growth.

MENDOCINO Co., 6/25/18 — The Pawnee Fire grew only 500 acres over night, a significant reduction in its rate of spread from yesterday, when it exploded by several thousand acres in one day (see map below). The fire has now destroyed 22 structures and at least 600 are threatened, but there do not appear to be any deaths or major injuries. Yesterday’s mandatory evacuation remains in effect, but it does not appear that any new evacuations have been ordered (see below for details). And containment remains at 0%, however it should be noted that this single number does not capture the complexity of fighting a fire.

As of this morning 237 personel are fighting the fire, 32 engines are engaged, as well as two helicopters, six water tenders, and seven dozers — and additional resources are on the way. Tanker planes made continual flights from the Ukiah Airport yesterday, and may make them again today.

A shelter for evacuees has been created at Lower Lake High School, at 9430 Lake St. in Lower Lake. And an if you have large animals you can go to the Social Service Center at 15975 Anderson Ranch Parkway in Lower Lake. For additional animal needs, call animal control at (707) 263-0278.

Containment refers to the percentage of the fire’s perimeter that has been surrounded by a fire break and hose-line, which is a very high standard. Often before this standard can be met the fire’s rate of growth will slow, or parts will burn out. Firefighters also often first devote resources to defending houses and other property as a fire approaches, an activity that doesn’t necessarily get reflected in the containment number.

To better illustrate this here is an excellent map of the fire as it stood last night. The data was collected by the U.S. Forest Services’s National Infrared Operation Unit (NIROPS), and ported over to Google Maps by our colleagues at Yubanet.com:

It’s also informative to look at the statewide map created by CalFire showing all the major wildfires currently being fought in the state:

The full evacuation order is as follows:

“The mandatory evacuation notice for Spring Valley is being expanded to include all areas north of Highway 20 and east of Old Long Valley Rd to Round Ball Rd, including Mule Skinner, Long Branch, Watertrough Rd, Flintlock, Muzzleloader, No Guns, Antelope, Cougar, Marianne, Ramrod, and Moccasin. When evacuating remember pets, personal computers, prescriptions, photos, paperwork and phones (mobile). If time allows, be sure to close all doors and windows. A shelter has been established at Lower Lake High School, 9430 Lake Street. This is a MANDATORY EVACUATION notice form the Lake County Sheriff’s Office.”

The following agencies are co-operating on the fire: The Lake County Sheriffs Office, Lake County OES, the California Department of Corrections and Rehabilitation, the California Conservation Corps, the Bureau of Land Management, the U.S. Forest Service, the California Highway Patrol, PG&E and Lake Evacuation Animal Protection.