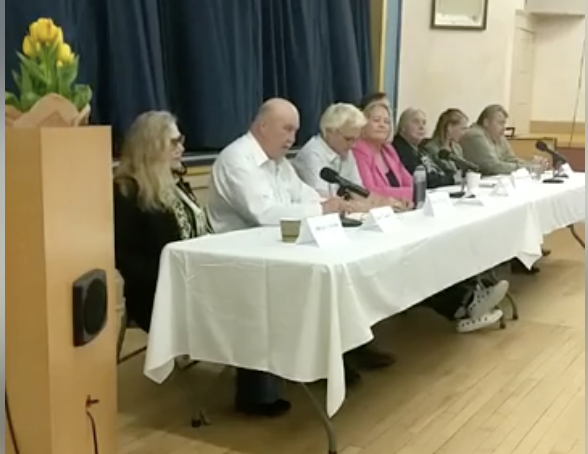 MENDOCINO CO., 4/6/18 — In the age of cannabis legalization, government gets to regulate cannabis, and at least during election season, cannabis growers get to hold government accountable. So it was that the Mendocino Cannabis Industry Association hosted two debates in Mendocino in the past week, focused, though not exclusively, on the local cannabis and Mendo’s cannabis regulations. We’re posting some videos of those debates here, our live-stream of the Little Lake Grange forum from last night, and Mendocino Access TV‘s video of the Comptche forum that happened Saturday.

This moment of flux for the cannabis industry has coincided with one of the most competitive local election seasons in recent memory. Notably the two supervisorial districts up for election this year (Board elections are staggered), the Third and Fifth, do not have incumbents. However, the men who previously held those seats were both largely absent from the intense debates around regulations — Dan Hamburg because of a conflict of interest, and Tom Woodhouse due to his absence and resignation. Given this the results of this election could dramatically change the direction of the Board.

Here’s the April 6 debate of third district candidates at the Little Lake Grange in Willits. The video is in three parts and is provided thanks to volunteer camera operators Mark Shaffer and Karen Byars.

Here’s the the link to watch the March 30 debate of fifth district candidates at Comptche Community Hall in Comptche, thanks to Mendocino Access Television. From left to right the candidates are Alan Rodier, Chris Skyhawk, Ted Williams, David Roderick, and Arthur Juhl.

Editor’s note: Our dedicated readers might wonder about the audio and video quality on the live-stream, given our recent equipment purchase. We apologize for this. We had every intention of using our new equipment to film this forum, but (and we know this is a cliche) one of our cars broke down on the way back to Willits, and we couldn’t make it back in time.