Editor’s note: This story has been developing throughout the day and we post the most recent updates at the top. For more details on what happened earlier, just scroll down.

UDPATE 2/14/18 — Officials released the name of the woman who was killed. Here is that update.

UDPATE 3:50pm 2/13/18: In a brief conversation with The Mendocino Voice, Trevor Thurston, sales manager at Thurston Auto Plaza, gave us a few more details about the auto theft that led to the high-speed chase.

According to Thurston a woman, in her mid 40s, and average height, came in to test drive a used black 2015 Camaro. He said she was dressed in all black, in heavy clothes, as though for motorcycle riding or snow, and was wearing sunglasses.

After a test drive she asked to purchase the car but did not qualify for financing. She then went out and asked to listen to the car once more. Once the car had been started she allegedly pulled a gun on the salesman and demanded the keys, then jumped in and drove off. Thurston staff promptly called 911, at which point the chase ensued.

UPDATE 1:32pm 2/13/18 — The Mendocino County Sheriff’s Office(MCSO) has confirmed that the suspect in today’s high speed chase was killed.

According to a press release issued by the MCSO, the suspect, a white woman whose name has not yet been released, allegedly stole a Chevy Camaro at the Thurston Auto Plaza in Ukiah, at around 9:30am today. A high speed chase ensued, in which she led sheriff’s deputies north on Hwy. 101, up the Ridgewood Grade, at speeds of over 100mph. At Willits the deputies were joined by officers of the Willits Police Department.

The suspect crashed the Camaro north of Willits, near the northern onramp to the 101. According to the press release she “…exited the Camaro while holding a handgun and subsequently confronted the pursuing Deputy Sheriffs and Officers.[sic]” The release states that “a shooting resulted.” The suspect was killed.

That section of road has been closed to preserve evidence, and is expected to remain closed for many hours. Southbound traffic on the 101 is being rerouted onto Reynolds Hwy. to Commercial St., to Hearst Rd. and then onto Main St. in Willits. Northbound traffic follows the same route in reverse, taking Main St. up to Commercial St., to Hearst Rd. to Reynolds Hwy.

Investigators from the Mendocino County District Attorney’s Office were called to the scene to conduct the investigation. D.A will be the lead investigative agency in the killing. 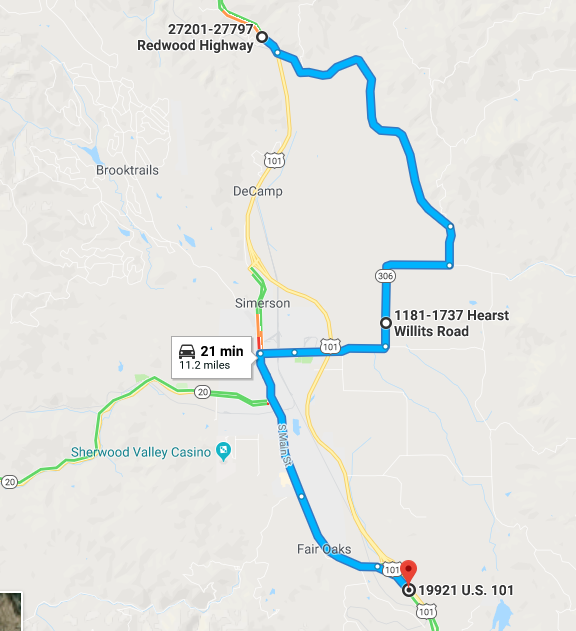 Here’s the detour that the road closure is causing.

Synopsis:
On 02-13-2018 at 9:25 AM the Mendocino County Sheriff’s Office was notified of an armed robbery of a Chevrolet Camaro at Thurston Auto Plaza located at2800 North State Street in Ukiah, California.

The suspect was described as being a white female adult and the Camaro was last seen traveling at a high rate of speed northbound on Highway 101 towards Calpella.

A short time later a Mendocino County Deputy Sheriff saw the Camaro traveling at a high rate of speed northbound on Highway 101 near the CalFire Howard Forest station a few miles south of the city of Willits.

The Deputy Sheriff attempted a traffic stop of the Camaro and a pursuit ensued at speeds over 100 MPH onto the Highway 101 bypass.

A short time later the Camaro crashed along the roadside of Highway 101 at Mile Post Marker 49.10 north of the bypass.

A white female adult exited the Camaro while holding a handgun and subsequently confronted the pursuing Deputy Sheriffs and Officers.

A shooting resulted and the white female adult died at the scene. No Deputy Sheriffs or Officers were injured as a result of the shooting.

Investigators from the Mendocino County District Attorney’s Office were summoned to the scene and will be the lead investigative agency.

All media inquiries into the incident or investigation are being directed to the Mendocino County District Attorney’s Office.

Highway 101 was closed to both directions of traffic to preserve scene evidence and it was expected to remain closed for several hours.

ORIGINAL:
WILLITS, 2/13/18 — A wild police chase, beginning in Ukiah and ending just north of Willits, ended with law enforcement shooting and killing the suspect today. Hwy. 101 remains closed at the northern interchange of the Willits Bypass as of 11:40am. Though the bypass is closed, travel north and south is still possible. Southbound traffic is being routed onto Reynolds Hwy. and from there through the Little Lake Valley, eventually back onto Willits’ Main Street. Northbound traffic is being routed through Willits to Reynolds Hwy.

Based on scanner traffic, and as of yet unconfirmed by officials, it appears that a woman robbed a vehicle from a dealership in Ukiah then led law enforcement on an extremely high speed chase up the Ridgewood Grade and lost control of the vehicle near the northern interchange of the Willits Bypass.

When someone is shot on a road it often leads to prolonged road closures as the road becomes a crime scene and evidence is gathered.

We’re awaiting more information and the situation is developing.

Here is some reporting from the scanner, as it happened, from our colleagues at Mendocino Sports Plus:

*Correction: An earlier version of this article included a typo in the dateline.