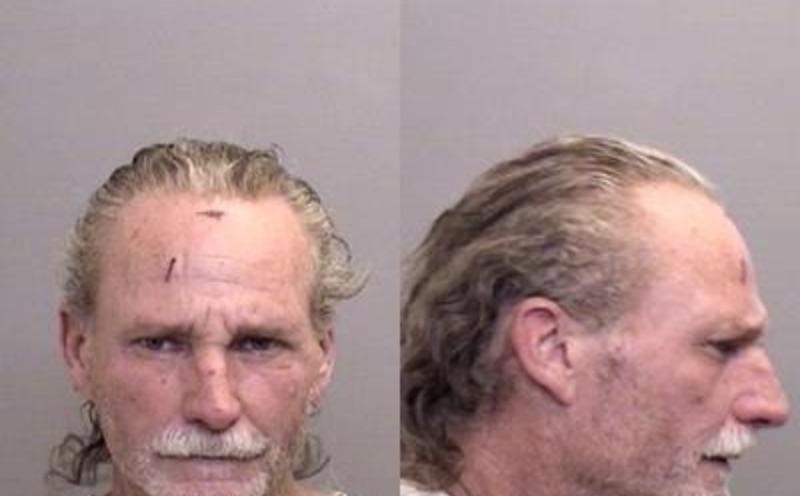 MENDOCINO Co., 8/7/17 — A man was shot to death yesterday in Navarro, his name has not been released, but a suspect is in custody. Michael Jay Saner, 58, of Navarro was booked for murder, following a short manhunt. He was brought in without incident. According to a press release from the Mendocino County Sheriff’s Office the victim died of a shotgun wound.

The victim, a 55 year old man, was known to associate with the alleged murderer, and the homicide may have been the result of a property dispute or personal squabble. Apparently the two had at some point been roommates.

At about 7pm yesterday, Aug. 6, deputies were called to a reported shooting in the 2700 block of Sea Biscuit Dr. in Navarro. Though medical personnel had responded, the victim was dead by the time deputies arrived.

Witness at the scene provided the the deputies with information on Saner and his vehicle, and a couple hour manhunt proceeded. Several tips were also called in. The hunt ended around 9:20pm at the Chapel of the Redwoods Baptist Church in Comptche. There, deputies found Saner in his vehicle, and he was taken in without incident.

He was booked at the Mendocino County Jail. Both MCSO detectives and an investigator from the district attorney’s office investigated.

Synopsis: On August 6th, at approximately 6:52 PM, Mendocino County Sheriff’s Deputies were called to a reported shooting that occurred in the 2700 Block of Sea Biscuit Drive, in the Rancho Navarro sub division of Navarro.

Responding deputies arrived and found medical personnel staging in the area. Deputies entered the scene and found the victim, a 55 year old male, deceased from a possible gunshot wound.

Witnesses at the scene identified 58 year old Michael Saner, of Navarro as the suspect and his description and vehicle information were broadcast county wide. The Sheriff’s Office received several tips, including one from local emergency medical personnel who had responded to the call. The tip indicated that a vehicle matching the suspects vehicle had been seen in the area of Flynn Creek Road traveling towards Comptche.

A Mendocino County Sheriff’s Detective as well as patrol deputies who were responding to the original scene checked the area of the Redwood Church in the 31200 Block of Comptche Ukiah Road and located the suspect vehicle. The suspect was located inside his vehicle and was taken into custody without incident.

The victim and suspect were known associates and may have been involved in a dispute over property ownership.

Any persons with knowledge of this case are encouraged to contact the Mendocino County Sheriff’s Office.

Here is a blow by blow of events as they happened from our colleague at Mendocino Sports Plus, who followed the events on the scanner yesterday evening:

And here is the post in which the arrest occurs: