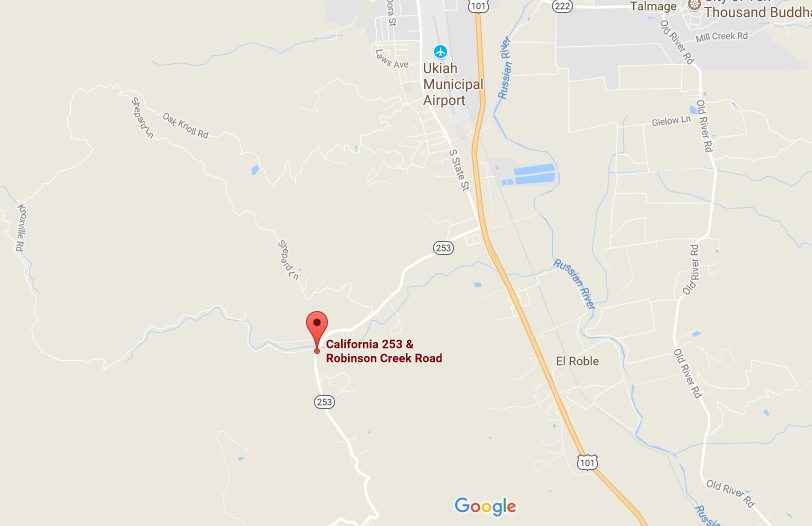 A screen shot of the location of the fire.

UPDATE 7:00pm: According to scanner traffic the powerlines have been de-energized, and the fire’s spread has been stopped at two acres.

UPDATE 6:55pm: According to the latest tweet from CalFire, there are indeed powerlines down near the fire, and structures are threatened. Multiple aircraft and five engines have been dispatched. Scanner chatter indicates that the fire is at two acres with potential to spread to four or five, but seems manageable.

The fire is burning about two and a half miles south-southwest of the Ukiah Airport.

ORIGINAL:
MENDOCINO Co., 8/5/17 — A small fire is burning southwest of Ukiah, near the intersection of State Route 253 and Robinson Creek Rd. Scanner traffic indicates that the fire might actually be two fire close to each other, on at about a quarter acre as of 6:25pm, and the other at 1/8th acre. The smaller fire is described as burning in some oak woodlands and threatening structures. Again, according to scanner traffic, both are being said to have a moderate rate of spread.

A screen shot of the location of the fire.

There are also reports of powerlines down near, or in the fire — it’s unclear. The fire is only about a mile and a half west of Hwy. 101, and about two and a half miles south of the Ukiah Airport.

CalFire is calling this the Robinson Fire.

#RobinsonFire Report of fire in the area of Robinson Creek Road & 253 – Ukiah pic.twitter.com/wuTXvMPQCt