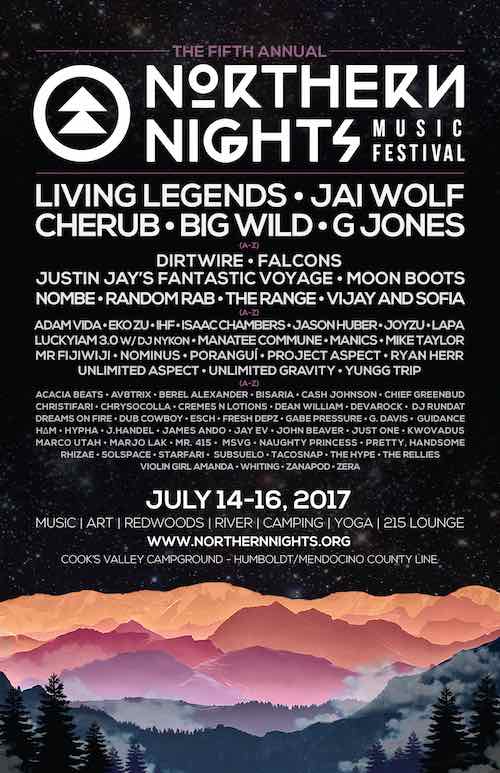 MENDOCINO CO., 7/12/17 — The Northern Nights festival is returning to Piercy this weekend for its fifth year, bringing together music, artists, comedians, yoga, and more for three days at the Cook Valley Campground. The event also includes meditation sessions, “the west coast’s biggest” silent disco, a river stage, a hammock lounge, and a 215 area with Emerald Triangle cannabis brands. Tickets are still available as of press time, and cover a three day pass and camping near the Eel River.

Full details from the press release are below the flyer:

Within the intersection of Mendocino and Humboldt Counties lies The Emerald Triangle, crown jewel of NorCal and home to the fifth annual Northern Nights Music Festival, taking place this July 14-16. Pioneers within the festival circuit for honoring the Triangle’s thriving Cannabis industry, renowned for beachside dance parties, afternoon swims, and best recognized this year for bringing together top headliners Living Legends in addition to over 90 other incredible acts, Northern Nights is [legally] high in vibes and an annual weekend not to be missed for both city dwellers and locals alike. Tucked along the Eel River, NNMF constructs its wondrous world under the towering redwood trees at the historic Cook’s Valley Campground, just 3.5 hours north of San Francisco.

Draw back the breathtaking Redwood Curtain of California for one weekend and enter a technicolor portal where music and community collide amidst swinging aerialists and fluid dancers to create magic with this year’s roster. Performing as a full group for the first time in 10+ years, the West Coast’s Hip Hop collective Living Legends are joined at the top of the lineup by mid-tempo indie electro producer Jai Wolf, Southern funk duo Cherub, Foreign Family Collective’s Big Wild and the bass-heavy G Jones. Paving the way for a musically-eclectic year, the NNMF headliners will welcome supporting acts Dirtwire, Falcons, Moon Boots, Nombe, Random Rab, The Range, Vijay & Sofia plus Justin Jay’s Fantastic Voyage will land its spaceship on the grounds for a wet n’ wild intergalactic sonic adventure, bringing even more heat to the warm Cali summer — Full NNMF 2017 lineup below!

As sun-soaked July days transform into warm summer nights, the many immersive environments hidden within the realm of NNMF come to life. Wanderers at Northern Nights can stretch their dance-weary limbs under the shade of magnificent redwoods at one of the many yoga classes offered throughout the weekend, or #B.Y.O.F. (Bring Your Own Floaty) and glide down the river to the soulful sounds permeating the breezy air from any of the four dynamic stages. A treasure embedded in the throes of Cook’s Valley Campground, The Grove is the place to be at any hour of the day; with Yoga In The Grovepresented by Bloom Farms and the most sought after evening performances curated by BurningLeaf Productions, The Grove plays host to intimate unplugged sets by main stage artists, burlesques, and all-night performances. Also up for discovery are the West Coast’s biggest Silent Disco, the Fun Field, a Hammock Lounge, and local Farm-to-Fest organic food vendors will converge for the Ultimate Farmers Market, hand-picked for a culinary experience of gastronomical proportions.

Progressive in its vision for the future of festivals and paying homage to its home base in the heart of California’s blossoming Cannabis industry, the luminaries behind Northern Nights opened a trailblazing Canna-friendly 215-zone on the festival grounds. As California prepares to move into an era where the consumption of weed is legal to all residents 21+, Northern Nights remains at the forefront of seamlessly integrating the new laws into the growing West Coast festival community by announcing the return of the original 215-zone with a new location and some big entertainment announcements to come. . Attendees can expect a newly-expanded environment to explore 420-friendly endeavors, including workshops, local & global arts and crafts vendors and much more.

Ready to experience Northern Nights? Welcoming curious and adventurous festival enthusiasts from across the globe, NNMF has curated experiential offerings that appeal to just about everyone. Learn more about reserving a camping spot underneath the Redwoods ahead of the festival, Glamping and other ticketing options. NNMF encourages all participants (18+) to activate their souls and smiles for three unforgettable days – no matter the path, you’ll find a home for the weekend in the majestic forests of NorCal.