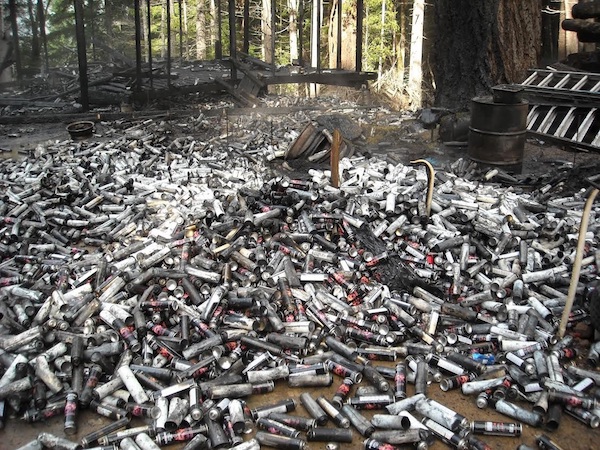 Butane cans after an illegal cannabis grow, provided by the CA Department of Fish & Wildlife. 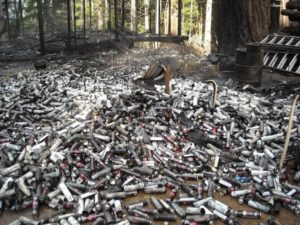 Butane cans after an illegal cannabis grow, provided by the CA Department of Fish & Wildlife.

MENDOCINO CO., 5/14/17 — Sacramento is sending some money to the North Coast for “illegal” cannabis grow clean up. In a press release, Assemblyman Jim Wood (D – Santa Rosa) trumpeted a line-item of $1.5 million as a win for environmental protection in the Emerald Triangle.

Governor Jerry Brown’s new revised budget proposal will allocate this money to the Department of Fish and Wildlife’s (CDFW) “Fisheries Restoration Grant Program.” The press release quote Brown saying, “These illegal grow sites do untold damage to forests and wildlife along the North Coast and with Assemblymember Wood’s leadership, we’re doing something about it.”

In a brief interview Cathy Mudge, a spokesperson from Assemblyman Wood’s office, pointed out that the wording of the release, singling out “illegal” grows, was not meant to apply to weed farmers currently in the process of trying to come into compliance, but instead directed at was are generally referred to as trespass grows.

Said Mudge, “One of the things that [Wood] stresses…is there there are plenty of compliant — on the road growers…but blowing up, grading roads to remote sites, and I think that’s what we’re talking about.”

She continued, “One of the things we absolutely don’t want is for this to be a general statement about growers, there are plenty of good compliant growers and and soon to be legal growers who are in the process.”

The funds will be used for mitigation and restoration of environmental damage resulting from illegal cannabis gardens. Pesticides, generators and fuel containers, water diversions, tree removal, and animal traps are often cited amongst the causes of the damages, which can include impacts to waterways and wildlife.

“Our beautiful pristine forests have become havens for these illegal grow sites,” said Assemblymember Wood in his annoucement. “These illegitimate growers have continued to ignore not only state laws for farming cannabis, but have left these sites ravaged by lethal chemicals, clear cutting and thousands of pounds of trash.”

A letter from the Mendocino County Board of Supervisors’ supporting the allocation is on the agenda for the upcoming May 16 meeting. Mendocino County’s new cannabis cultivation licenses program includes a “Mendocino Grown” certification that requires cultivators to demonstrate they are meeting certain environmental standards, similar to an organic certification, in their growing practices.

“These illegal grow sites do untold damage to forests and wildlife along the North Coast and with Assemblymember Wood’s leadership, we’re doing something about it,” said Governor Edmund G. Brown Jr.

“Our beautiful pristine forests have become havens for these illegal grow sites,” said Assemblymember Jim Wood, who represents these North Coast counties. “These illegitimate growers have continued to ignore not only state laws for farming cannabis, but have left these sites ravaged by lethal chemicals, clear cutting and thousands of pounds of trash.”

The worst chemicals used at these illegal sites are often-banned rodenticides which are used to keep animals away, but in fact often kill pacific fishers, deer and bear as well as the animals that prey upon them such as mountain lions, bobcats, hawks and spotted owls. One-eighth teaspoon of the pesticide carbofuran, a banned pesticide which is used by rogue growers, can kill a bear. These toxins remain in the ground and eventually run off into rivers and streams, destroying everything in their path, including endangered fish species such as Coho salmon.

“These funds will go to our well-established Fisheries Restoration Grant Program which was created to address declining populations of wild salmon and steelhead trout, and deteriorating fish habitat in California,” said California Department of Fish and Wildlife Director Charlton H. Bonham. “The $1.5 million will help us continue to clean up the egregious environmental damage, specifically to California’s waterways, caused by illegal marijuana cultivation sites.”

The illegal clear cutting creates dangerous kindling for forest fires when the fallen timber is not removed from the area. Chemical ponds are dug and filled with hazardous liquids. The trash left behind includes generators, piping, storage tanks, thousands of butane canisters, other fuel and abandoned weapons. Excavated pits are used to store weapons and then covered with debris. All of this creates a dangerous environment for firefighters, law enforcement and recreational hikers.

“The importance of this funding cannot be underestimated,” said Trinity County Supervisor Judy Morris.‎ “The future health of our watersheds, fisheries, forest and communities depends on the health of both private and public lands, in which public lands make up a significantly large portion of Trinity County. The cleanup of these areas will also serve to deter any future rogue growing activity, since the associated infrastructure is a significant cost. We are extremely grateful that the Governor’s office and Assemblymember Wood are continuing to address this extremely important issue.”

The funding will be included in the Governor’s May Revise budget which will be released on Thursday, May 11.

“I am grateful to the Governor’s Administration for recognizing the importance of cleaning up these environmental disasters,” said Wood, “and look forward to making progress on returning our North Coast areas to their pristine state.”