Russian River is no longer expected to crest. Highway 162 is open. SR 222 Talmage is open to Old River Road in Ukiah.

8:21pm: There are a series of accidents causing partial lane closures, please drive safe! You can see a Caltrans map of incidents here.

7:10pm : According to MCSO and UPD, power has been turned off at the south end of Oak Manor. North end to follow if flooding worsens. 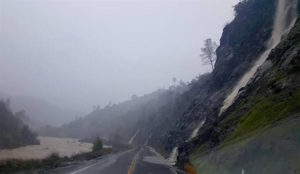 Short update here, according the CHP’s Covelo Rd., Hwy. 162, is blocked by a down tree and power lines at Stewart’s Point. PG&E is on the scene, but it’s unknown when the road will re-open. At one point, Caltrans needed to return with a bigger chain saw to remove the fallen tree.

According to MCSO, Fishrock, Peachland & Flynn Creek have closures.

In Ukiah, evacuation centers have been opened at the Ukiah High School on Low Gap Road and the Mendocino Office of Education, located 2240 Old River Road.

The City of Ukiah has posted this: “Despite intermittent rainfall, rivers and creeks are forecasted to rise quickly. Residents are strongly advised to be vigilant and leave areas prone to flooding.”

The City of Willits has posted the following message: “With the rain expected to continue until 12:00 am on Thursday morning, please don’t drive unless you must and use caution when you do.

Our self-serve sandbag station, which is located in the parking lot to the east of Willits Police Department, has been in use all day, with our crews replenishing several times throughout the day. Please limit yourselves to 10 bags per household. Brooktrails residents may obtain their sandbags at the Brooktrails Fire Department. We encourage businesses to obtain their supplies from any of our local hardware stores.

We’d also like to remind everyone to PLEASE be courteous to fellow drivers, pedestrians, residents, and businesses. We’ve had reports of vehicles speeding through flooded roadways, causing wakes onto other vehicles and properties. Not cool!”

From the Sheriff’s Facebook Page: Voluntary Evacuation of the Oak Manor Area Requested by The City of Ukiah: Due to eminent flooding in the Oak Manor area, the Ukiah City Manager and Emergency Personnel are strongly encouraging residents in the Oak Manor Area to evacuate. These locations are historically vulnerable to flooding and the rivers and creeks are rapidly rising and will continue through the night. 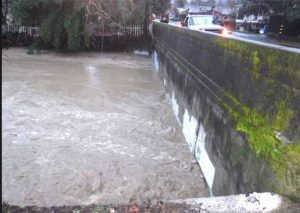 Power will be shut off in the early evening due to rising water. There are emergency evacuation centers open at the Ukiah High School located on Low Gap and Mendocino Office of Education located 2240 Old River Road. Emergency Personnel will continue to monitor the area, but residents are strongly encouraged to evacuate as soon as possible. For more information, call 463-6231.

Current road closures as of 4:30pm:

Fish Rock Road is closed due to a slide on Point Arena side and on Boonville side.

More information about closures in Willits and Ukiah below. 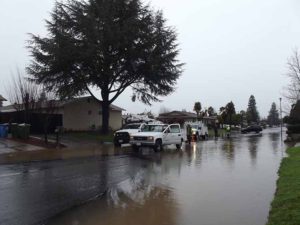 Washo at Gobbi, circa 3pm

According to the CHP: Talmage Road is closed due to flooding. For now the only route to Ukiah from the east side of the Russian River is to take Eastside Rd to Old Hopland then take S/B Old River Road to Us-101. US-101 is open at this time.

Perkins street at Oak Manor is closed. Washo from Gobbi to Pomo is closed.

There is flooding at State Route 253 and South State Street according to CHP at 6pm.

There are mud and rocks across Eastside Road just north of Largo.

Westside Road in #PotterValley Road due to flooding.

There is mud across the eastbound lane of Hwy 20, Route 144, east of Calpella.

There is a mudslide on the southbound lane of 128 at Philo.

Philo/Greenwood Road is now open after a tree was blocking the road earlier.

Highway 1 at the Garcia River is NOW CLOSED. The sheriff said he was working with CalTrans to have a monitor on site instead of having a closed gate, which sometimes takes hours to re-open.

Fish Rock Road is closed due to a slide on Point Arena side and on Boonville side. 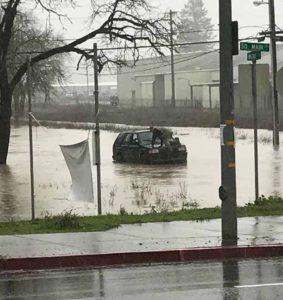 There is a mud slide on Highway 20 between Willits and Fort Bragg. He advised county residents to be prepared for 72 hours of isolation, to have medications on hand and make sure animals are secured. He advised the county government to close offices early to give workers time to get home before the floods start.

As of 12:24 in the afternoon, the eastbound lane of Spyrock Road, north of Bowman Place, is blocked by a slide.

Highway 101 has re-opened to two-way traffic from a slide at mile marker 63, about 6 miles south of Branscomb Rd, due to a broken culvert. Southbound lanes will be closed for a while and Caltrans is putting long-term traffic controls are in place. CHP officers are on the scene and may be letting people through slowly. Hearst Road at the turn where it heads East outside Willits is also closed.

Adrienne Moore, the city manager for Willits, sent the Mendo Voice this update on streets in Willits. More information will posted on the City of Willits Facebook page.

Please be advised that the following roads are experiencing varying degrees of flooding, with closures to occur as necessary:

There are reports of flooding in Covelo at East Lane/Mill Creek and Mendocino Pass Road.

HUMBOLDT County info is best found on our sister site, Redheaded Blackbelt. See the post here. Shelters are being established in Fortuna and Mad River, and the Van Duzen is also expected to crest. Anyone in or heading to Humboldt — be careful on the roads!— should check for road closures. We also recommend the Humboldt County Office of Emergency Services Facebook page for updates.

At 10:35am Sheriff Tom Allman came into the board of supervisors meeting to give an update on the storm and flooding. He said that, according to NOAA, the Russian River is expected to reach its high water mark at 9:00pm tonight, Jan 10, and may reach a height of around 26.1 feet, which will cause flooding in low-lying areas such as the Oak Manor area, Talmage area and Hopland area and may cause evacuations.

The sheriff said he is planning an evacuation center for the east side of Ukiah. The location has not been determined, but he advised members of the public to listen to radio stations KWINE, KZYX, and KWINE. Emergency services providers will be in contact with residents of Hopland and the Oak Manor neighborhood in Ukiah.

Talmage and East Perkins Roads are currently open. The Ukiah Police Department will also be issuing emergency alerts and automated calls. Updates will be available on the sheriff’s Facebook page.

There is a mud slide on Highway 20 between Willits and Fort Bragg. He advised county residents to be prepared for 72 hours of isolation, to have medications on hand and make sure animals are secured. He advised the county government to close offices early to give workers time to get home before the floods start.

Highway 1 at the Garcia River is CLOSED, as of noon. The sheriff said he was working with CalTrans to have a monitor on site instead of having a closed gate, which sometimes takes hours to re-open.

Babcock, Talmage and Gobbi in eastern Ukiah were starting to flood, as 10:51am.

Power lines are down on Sears Lane at Hwy 20.

There is a tree blocking one lane of Hwy 1 near Cameron Rd. The reporting party was able to remove part of it.

Shortly after noon, a Honda Civic spun off the road at 9501 East Road in Potter Valley. No injuries were reported.

A little after noon, a tree was blocking the road at 556 Virginia Circle in Redwood Valley.

There is an unspecified traffic hazard at 43501 Hill Crest Drive near Hwy 1 north of Manchester.

At 11:39am, there were mud and boulders in the northbound lane of 101 near Jaxon Keys winery north of Hopland. At 12:17, a big rig called for a tow in the same area.

Around 1,000 residents remaining without power this morning, according to PG&E.

If you see flooding on the road, the National Weather Services reminds you to “TURN AROUND, DON’T DROWN,” and report road hazards. If you need sandbags, they are available at the following locations, according to a MCSO press release:

They are also available outside the Willits Police Department on East Commercial in Willits. For a sandbag tutorial see below. Here’s more information about flood safety from NWS.

Readers are reporting that a large tree has blocked the Hearst-Willits Rd. around mile marker 5.5 in the Rock Tree Valley area. And the Tomki Creek ford is impassable.

If YOU have other information please post to Facebook or email [email protected], readers tips are the fastest way for us to spread information.

MENDOCINO Co. 1/10/2017 — The U.S. National Weather Service predicts high winds today that might make driving on the coast and in the mountains difficult. Expect thunderstorms and hail around the county, too. The weather service predicts one to three inches of rain, possibly up to five inches in the mountains.

Here’s a link to a video tutorial on how to fill sandbags, courtesy of the sheriff’s Facebook page.

Route 1: Parts of Route 1 are still fully closed in areas north and south of the county: just north of Point Arena, and one mile south of the 101 near Leggett. As of 3:22pm yesterday, CalTrans reported that Route 1 at the Garcia River was re-opened to two-way traffic but it is expected to flood later today.

Route 128 is still closed for 11 miles, from the junction of Route 1 to Flynn Creek Road.

At 6:27am, CHP received a report of a car hitting a telephone pole on the Comptche/Ukiah Road, 6.2 miles from Hwy 1. The motorist hit a tree that had fallen across the road. As of 6:46am, there were power lines and a tree down in the road, just south of Mendocino.

At 6:16am, a white Ford Explorer was blocking the roadway at 24500 Sherwood Road in Brooktrails.