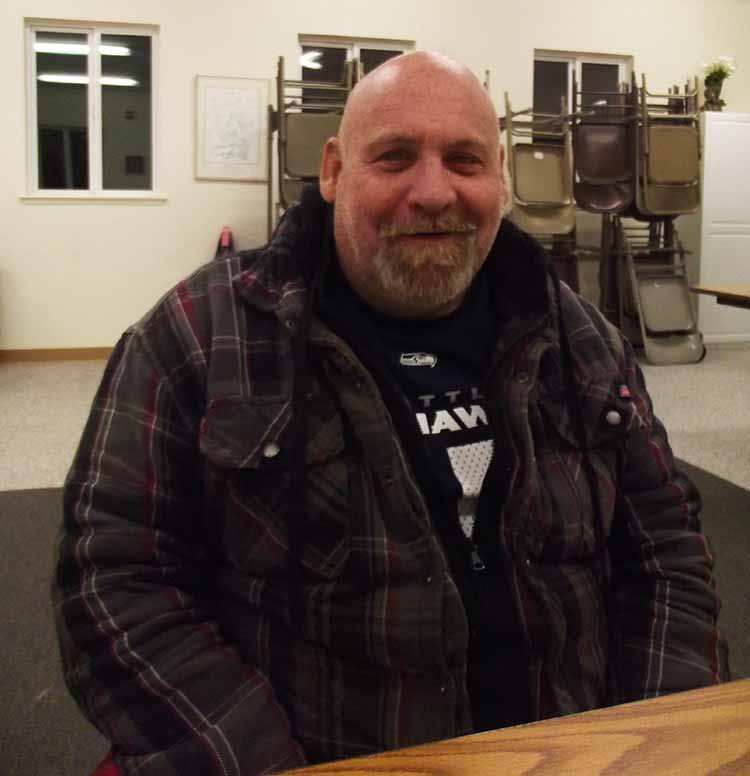 A man who stayed at the winter shelter in Ukiah on the longest night of the year.

UKIAH 12/22/2016 — Ukiah’s newly opened temporary winter homeless shelter was filling up steadily on December 21, the longest night of the year. People came to register for beds at dinner time, in the community room at Plowshares, the soup kitchen a few blocks south of the shelter, which is at 1045 South State St. The shelter has reached its capacity several times since it opened on December 15. There are more beds for men than there are for women, though if the women’s side doesn’t fill up, one of those beds can be moved to the men’s side. There are also crates for pets, and limited laundry facilities for bedding.

Several people shared their thoughts on sleeping indoors for the night, while others talked about why they weren’t interested in staying in the new accommodations. Some had cars or other backup plans. Others were mistrustful, and one woman found the close quarters intolerable.

Standing outside the community room while waiting to find out if he would be the last man admitted to the shelter that night, a man who gave his name as Tommy James of the Shondells told his story. If he didn’t get a bed, he planned to sleep in his truck, where he has been staying for a month or two. Tommy, 53, is a short, powerful man, with a neatly trimmed reddish goatee and a knack for telling a tale. He has been homeless for ten years, since being laid off of a job drilling oil wells. He said he made few hundred thousand dollars drilling the deepest hole in Oklahoma, “but I blew that on wine, women and song.” He went on to explain that “I don’t consider myself homeless, really. I consider it an adventure that God’s given me for some reason.”

As dog yapped in the background and a man in a rakish hat strolled around strumming a guitar, Tommy told the story of his six years in Aspen, “Sleeping underneath the biggest frickin’ tree they got there. When it rains or snows, you stay dry, at the base right next to the river. And it was so wonderful, ‘cause the river would just put you to sleep, just the sound of it, and the store was right across the street…you get up, go to the store, get a donut and some milk and stuff…I met so many nice people in Aspen.”

But it soon became clear that homelessness is not an idyllic camping trip. “I’ve been through hell,” Tommy reflected. He teared up as he started to talk about his hope that “Donald Trump can turn this around and help the homeless and put everybody back to work. I know he has a plan…there’s so many homeless people. I’ve been through eight states, and I cannot believe the homeless people that are out there…how do you fix it? I’m trying to figure it out.” At that moment, Libby Guthrie, who was working late that night, opened the door and said, “You’re one of the ones coming into the shelter tonight? You drew a long straw, come on in!” Registration is done on a first come, first serve basis, but it was impossible to determine if Tommy or another man had gotten there first, so they drew straws for a bed.

Not everyone was interested in staying inside that night. The man who had been strumming his guitar, and who preferred not to be named, said, “I like to have a little space…I don’t like looking everywhere and somebody’s looking right here, looking here and somebody’s right there. Now, if it looks like Angelina Jolie or something like that, I might make an exception.” He may have had a drink or two, but he knew what he wanted.

Another man in a long coat, who gave only his first name Chris, was nonchalant about his success in obtaining a bed at the shelter on the longest night of the year. “What’s gonna change is the fact that I’m gonna sleep in a bed,” he reflected. “They’re not necessary, but they’re nice to have.” When he’s not at the shelter, he said, “I like to sleep on benches. This is a nice bench, for example,” he observed, indicating the bench outside the community room at Plowshares, where he took a few minutes for a conversation. “This bench is an A-plus.”

One woman, who also gave only her first name, Debbie, was pleased to be spending her fourth night at 1045 South State Street. “It’s nice this year. Very pleasant,” she declared. Debbie, wore a long purple coat and her hair clipped neatly on top of her head, and has been sleeping on the streets for a year, figuring things out day by day. “It’s very tough,” she said. “Sometimes I have to sleep in water, where there’s water, rocks, it’s all wet…it’s very scary, sleeping on the streets.” It was starting to get chilly in the breezeway outside Plowshares. That night temperatures would hit 36 degrees in Ukiah.

Debbie was thankful for the shelter, but another woman, who gave no name, expressed frustration with “Prima donnas, treating us like garbage and having a very special bathroom they won’t let us go near.” She was also unhappy about having to sleep next to someone she called “crazy.” She explained she is homeless because she was robbed of her retirement and had been staying in hotels on her credit cards, but that she used them all up and is now sleeping in her car. “I am educated,” she said. “I’m not from the streets.”

One of the volunteers said that she planned to “Go home and have a good cry.” Phyllis, who only gave her first name, was at a table in the community room at Plowshares, interviewing and registering the people who would stay at the shelter that night. She was deeply affected by the histories of the people she spoke to, some of whom have been homeless since childhood. “We have failed them,” she said. “There will always be people who fall through the cracks.” But, “This crack is way too big. It’s not a crack. It’s a chasm.”

Though they’re not required to answer, all people staying at the shelter are interviewed to gather demographic information. Phyllis explained that there are no questions that could elicit answers that would disqualify them from staying at the shelter. No one working at registration would comment on the nature of the questions further, but Libby Guthrie, Executive Director of Mendocino County AIDS and Viral Hepatitis Network, said she hopes that eventually a survey assessing the vulnerability of individual homeless people can be used to help them find housing. 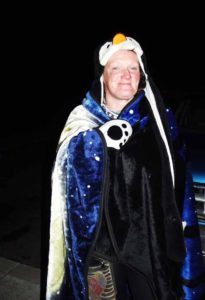 Christine Seigler in her penguin hat, after signing up to stay at the shelter

The next person to approach Phyllis’ table was 45-year-old Christine Seigler, who has a small swastika tattoo beneath her right eye and wore a hat with a penguin face on it. Seigler said she had waited until near the end of the intake process because she wanted to make sure she wasn’t taking a bed from someone sick or elderly. Before talking with the Mendo Voice, Seigler traded quips with her friend, Veronica “Super Dyke.”

“Oh, my God, look at you!” Veronica exclaimed. “You’re sober and shit. I like you so much better now.” Seigler countered by saying, “I never disliked you less.” Veronica continued the ribbing, observing that, “You got shoes on your feet. Oh dear God.”

“No. I got cleats on my feet,” Seigler corrected her. “Dumpster special. Cinderella would have been jealous of these. Straight up, they fit like a glove.” 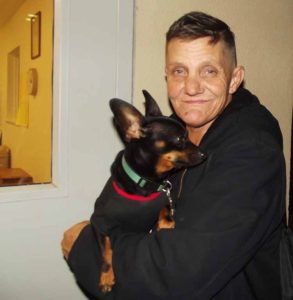 Veronica and her friend Bon Scott. Veronica has a place, but says “I don’t want to forget where I’ve been.”

After Veronica went into the dining hall, Seigler said, “She’s probably one of the first people who slapped me, back in the day, for messing up. She’s great people, she is. It makes me happy to know that this guy’s always in my corner…we choose each other out here.” Seigler is from Ukiah and has been homeless, off and on, for 20 years. “I’m not homeless in Ukiah, I’m houseless in Ukiah,” she specified. Before the shelter opened, she said she stayed in front of Safeway, though she recently “pulled away from everyone,” after getting robbed. “When people who are in the same situation as you are treat you ugly, it makes you feel even uglier,” she remarked.

Seigler spoke about being frequently woken up by police when she sleeps outside. “I’m just glad they’re not arresting us for not having a place to live,” she said. “We’re this far away from concentration camps, and that’s another reason I stay out of shelters. And another reason I do not get rid of this swastika on my face. Because even though it’s a Buddhist symbol of Zen, it’s also a symbol of deep-seated ugliness and ugly oppression. And I was with someone for 15 years who was basically prison raised, so I do know what it’s all about. But I myself have never partook in anything like that.” She described herself as “brutally loyal, even when it’s brutal to me.” A few minutes later, she got into Tommy’s truck for a ride to the shelter.

When Chris, the man who thought highly of the Plowshares bench, was asked if it was dangerous to sleep outside, he said, “Everything’s kind of dangerous, I guess. It depends on who you are. No more dangerous than anything else, for me.”

One thought on “A few of Ukiah’s homeless people talk about the new winter shelter.”