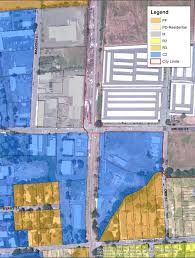 The shelter overlay zone in Ukiah.

UKIAH — Street Medicine Program Manager Kael Loftus sees “an unacknowledged refugee crisis” in the number of homeless people living in Mendocino County. But he adds “I don’t see demonstrated urgency” to find a solution to the problem.

There are plenty of people with a sense of urgency about housing the homeless, and Loftus is among them. Street Medicine, a volunteer-based program spearheaded by Dr. Noemi Doohan of the Ukiah Valley Medical Center, began delivering medical care to guests at the emergency winter shelter on Mazzoni St. in Ukiah around Thanksgiving of last year. Street Medicine is run by hospital personnel and received a $2 million grant from the non-profit healthcare organization Partnership Health Plan last year. 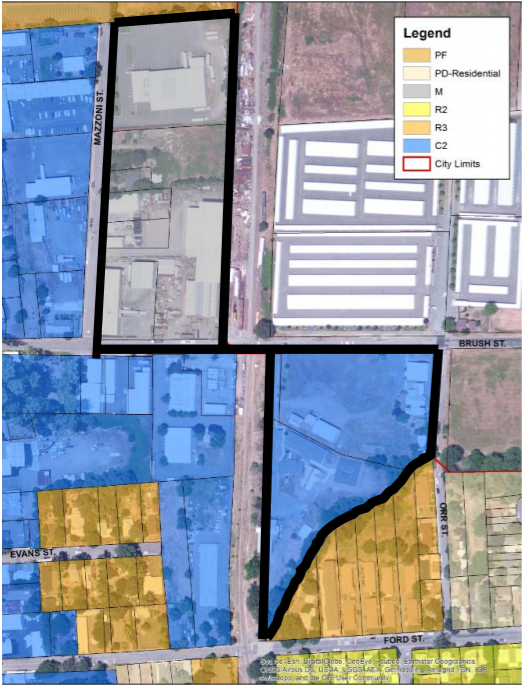 It is unclear if there will be an emergency winter shelter this year. Redwood Community Services’ tiny houses project has been unable to break ground, and the warehouse that served as a shelter last winter is no longer available. A different set of protocols and delays has hampered each effort to bring the over 1,000 homeless people in Mendocino County out of the cold this winter.[footnote]Last year’s point in time count tallied 1,032 homeless people in Mendocino County, 63 of them under the age of 18. Eleven of those children were in emergency housing, ten were in transitional housing, and 42 were unsheltered altogether.[/footnote]

The warehouse at 943 Mazzoni Street, where the non-profit organization Mendocino County AIDS and Viral Hepatitis Network (MCAVHN) operated a temporary shelter until the end of March last year, is being used by a local business owner. MCAVHN is tasked with preventing the spread of HIV and Hepatitis C, and addressing mental health and substance use disorders, conditions which afflict many in the homeless population.

The Mazzoni St. property and a parcel owned by the Saint Peter Eastern Catholic Church are in the shelter overlay zone, a sideways figure eight-shaped area in the northeast quadrant of the city.[footnote]The upper loop of Ukiah’s shelter overlay zone is bordered by Mazzoni, the fairgrounds, the railroad tracks, and Brush St. The lower loop of the figure eight is bordered by Brush St., the tracks, Orr St., and Ford St.[/footnote] As per state law, the city has set aside a zone where emergency homeless shelters may operate by right, rather than undergoing the lengthy process of acquiring a use permit. According to Ukiah’s Interim Planning and Community Development Director Kevin Thompson, a use permit is subject to CEQA, which requires an environmental analysis and a minimum 20-day public comment period before a decision can be made.

The other proposal for a shelter was also thwarted this year. Redwood Community Services (RCS) received a $1 million Community Development Block Grant last year to purchase the church’s property and build a tiny house project called the Housing First Village there. Because the cost of sanitation hookups for each unit can run into the tens of thousands of dollars, the original plan called for one community building with all the standard amenities and a number of small sheds, each where one person could store personal belongings, lock the door, and sleep under a roof.

However, even though a use permit with its attendant environmental review process was not required under zoning law, the grant money was federal, which did trigger a lengthy review process. During the delay earlier this summer, the church accepted another buyer’s offer on the parcel. Though the property is moving through escrow, RCS Executive Director Camille Schraeder vows that the Housing First Village will find another site by fall of next year.

But that still leaves the homeless population unsheltered this winter.

Ukiah Mayor Steve Scalmanini put it plainly. “The areas designated don’t have anything available.” The Mendocino County Board of Supervisors recently agreed to adopt an ordinance amending the County Code to allow emergency shelters in limited and general commercial zones by right, rather than going through the process of applying for a permit. But the county ordinance will not improve the situation in Ukiah, which has satisfied state law by designating a geographic area where emergency shelters can operate without undergoing such a process. Ukiah, Scalmanini opined, is the best location for a shelter because it has accessible shopping, free lunch and dinner at Plowshares, free groceries at the Food Bank, and a concentration of mental health services. He expects that finding a suitable building outside the shelter overlay zone and then getting a use permit would take a couple of months, which means the shelter wouldn’t open until winter is well underway.

Scalmanini is part of the Homeless Shelter Action Group, a volunteer ad hoc body affiliated with the Continuum of Care (CoC). The CoC conducts the annual count of the homeless, tries to capture federal dollars for  Housing and Urban Development-funded housing projects, and attempts to prevent homelessness and rapidly re-house those who are homeless. It is coordinated by a group consisting of more than 30 local social services agencies. The CoC is overseen by the Adults and Aging Services branch of the Mendocino County Health and Human Services Agency.