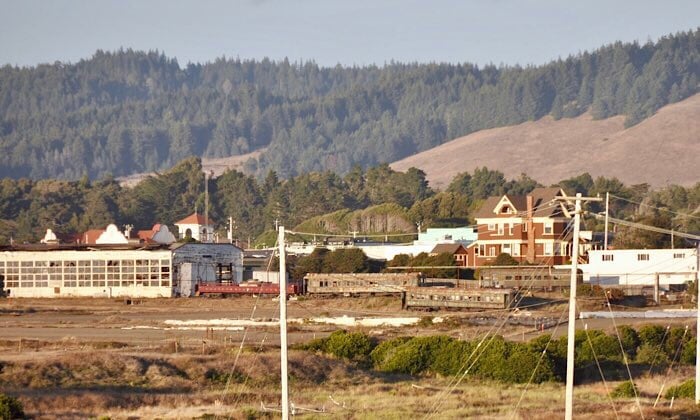 FORT BRAGG, CA, 9/16/22 — The California Coastal Commission plans to join the city of Fort Bragg in suing Mendocino Railway, the latest chapter in a litigation saga stemming from the railway’s claim of eminent domain over the former Georgia Pacific mill site on Fort Bragg’s headlands.

Mendocino Railway, which operates the popular Skunk Train, raised controversy in the community after it used its railroad status to purchase the 272-acre beachfront property from Georgia Pacific in 2021. Fort Bragg, which has been reckoning with clean-up of the site and considering plans for its future since the mill closure in 2002, is arguing in court that the company needs to follow local and state permitting requirements in current and future development on the large swath of land.

“Our suit is not about eminent domain and losing the property,” Bernie Norvell, Fort Bragg’s mayor, told The Mendocino Voice by email. “Our lawsuit is about process and making sure the property owner has to follow the same public process that anyone would.”

An Aug. 12 letter from the California Public Utilities Commission (CPUC) to Mendocino Railway said that, while regulated by the CPUC, a 1997 judgment found that the company “did not constitute a public utility to the extent it provides excursion rail service, which constituted 90% of its overall business.” The CPUC upholds that judgment, writing, “‘railroads’ and ‘public utilities’ are not synonymous under the Public Utilities Code,” though Mendocino Railway has previously argued that it is a public utility in order to claim eminent domain. The city and the train still need their day in court, though, before the issue of headlands ownership itself can be adjudicated.

The California Coastal Commission, the state agency governing coastal development, now plans to back Fort Bragg in its lawsuit and join proceedings beginning Oct. 6 or soon thereafter, according to a document filed in the Superior Court of California for the County of Mendocino on Sep. 8. The Commission feels that “disposition of the action may as a practical matter impede the Commission’s ability to protect its interests in implementing and enforcing the California Coastal Act,” according to its motion to intervene; Mendocino Railway has argued that its railroad status federally preempts it from following the Coastal Act and from applying for coastal development permits in work on its property.

The motion to intervene was preceded by another lawsuit, this one filed by Mendocino Railway in early August against both Fort Bragg and the Commission. Mendocino Railway hopes its suit, filed in the United States District Court of the Northern District of California (Eureka Division), will determine that its rail-related development is subject only to the jurisdiction of the Surface Transportation Board (STB), a federal agency that adjudicates and resolves railroad disputes and proposals, which would preempt it from the jurisdiction of Fort Bragg or the Coastal Commission.

“The California Coastal Commission, despite how important they think they may be, are not the ultimate authority in railroad law,” Mendocino Railway President Robert Jason Pinoli said in a phone conversation with The Voice last month.

But many residents have raised questions and concerns about Mendocino Railway’s oversight in the cleanup and development process on the property.

George Reinhardt, a longtime local organizer and co-founder of the Noyo Headlands Unified Design Group, has worked for decades on developing a vision for the site — last month he told The Voice that some of his favorite ideas include a small energy park using existing infrastructure, creek daylighting of buried streams, and planning for low-impact electric transportation on the site.

In a news release from the Grassroots Institute on Thursday, he called the Coastal Commission joining the suit “a terrific development.”

“[T]his won’t settle the eminent domain issue in any final way, but a decision in favor of the City and the Coastal Commission will make clear that Mendocino Railway is overreaching,” Reinhardt said. “The next step is to void the ‘taking’ which occurred last November. The land taken by use of eminent domain on the Headlands and in the Pudding Creek watershed should all be in the public domain––in my opinion.”

Trial in Fort Bragg’s lawsuit against Mendocino Railway has currently been set for June of 2023.


Note: Kate Fishman covers the environment & natural resources for The Mendocino Voice in partnership with a Report For America. Her position is funded by the Community Foundation of Mendocino, Report for America, & our readers. You can support Fishman’s work with a tax-deductible donation here or by emailing [email protected]. Contact her at KFishman@mendovoice.com or at (707) 234-7735. The Voice maintains editorial control and independence.