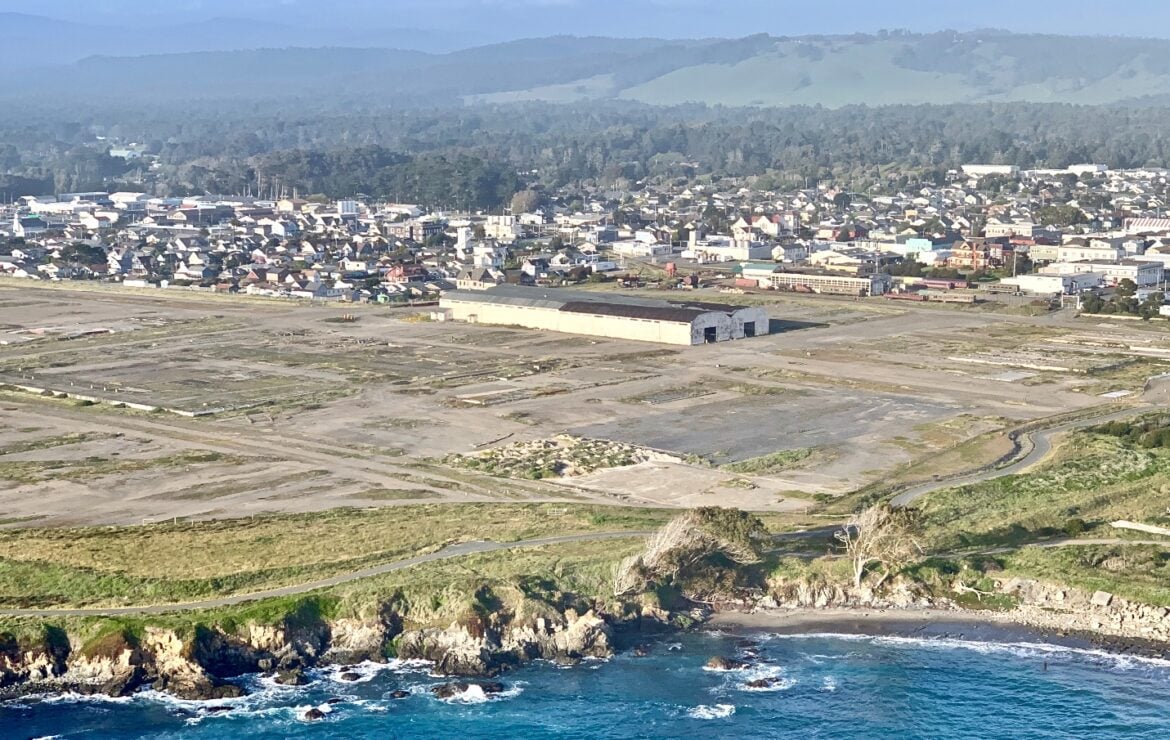 FORT BRAGG, 12/14/21 — The Skunk Train, one of the county’s most popular tourist draws, became a sore point for many coastal residents after it decided to use its status as a public utility to condemn and acquire almost 300 acres of prime beachfront property, albeit contaminated, for $1.23 million. It’s the second property the Skunk Train took through eminent domain. The owners of those parcels welcomed the handover, but many, including the City of Fort Bragg, did not.

Mendocino Railway, which owns and operates the Skunk Train, succeeded in taking two properties in Fort Bragg through eminent domain this fall using its status as a Class III railroad — the 272-acre Georgia-Pacific mill site for over a million and another property adjacent to its rail operations for $155,000. Georgia-Pacific itself approached the railway company about completing the transaction for the beachfront property, said Robert Pinoli, CEO of Mendocino Railway. A Georgia-Pacific representative wasn’t immediately available for comment.

As far as the other eminent domain case, the owner was happy with the transaction because the property, which abuts the railroad tracks, had become a site of drug use and homeless encampments. The single-family house on the property had also burnt down. Pinoli said the company has fully remediated the area where the house was destroyed since taking over the land in February. “The city, for nearly a decade, had done nothing about it,” Pinoli said. “They could’ve taken the property, but literally the problems would spill over the hillside onto the railroad’s property so the city actually encouraged us to take that property.”

Now the company is in the process of trying to take a third property — and this one is being contested by the owner of 20 acres along Highway 20 in Willits. The attorneys for the property owner did not respond to a request for comment. Pinoli said that property is, for all intents and purposes, bare land and would be the future site of a freight transload and passenger depot.

Mendocino Railway is able to do this because it’s considered a public utility. All of the court documents state the company has the right to take the properties for ongoing and future freight and passenger rail operations. But the city of Fort Bragg, which had been working on plans to develop the GP millsite for almost two decades, is challenging that status in court. City attorneys are arguing that the company operates a tourist train that isn’t providing a public service and thus shouldn’t be afforded special rights.

But Pinoli said the Skunk Train does more than just provide tours. A company with rights to mine rock east of Fort Bragg is already trucking aggregate to the coast using Highway 20, Pinoli said. The company would prefer to transport its aggregate using rail, he said.

The eminent domain situation and a Notice of Violation issued by the county over an oil spill on the tracks led to about a dozen people protesting in front of town hall earlier this month.They had complaints beyond those two issues, ranging from fears of a private company controlling so much of the city’s land when it could have gone under public control to the ability of the company’s railbikes to block traffic along Main Street multiple times a day.

One of the main concerns is that the company won’t clean up the remaining contamination at the mill site. According to court documents, the company has yet to be successfully added as a party to the Department of Toxic Substances Control’s (DTSC) site investigation and remediation order for the property, which means GP is still legally responsible. The fact that environmental health staff were initially met with resistance when trying to investigate the report of the oil spill didn’t help matters, though environmental health staff said the company ultimately let them take a look.

Pinoli said people have a right to protest, and the railway staff brought them cookies and water, but he wasn’t sure what they were protesting. “People think we’re not subject to the law or we’re not going to follow the law,” Pinoli said. “That’s an absolute lie. As a railroad, we probably follow more laws than any other entity you can shake a stick at.”

There are specific areas where railroads don’t get local permits, Pinoli said, such as when you want to repair, remodel or rebuild a facility for rail purposes. But that didn’t mean the company wasn’t incorporating the input of the community, he said. The development plans for the mill site that were laid out in the “Little Stinker” mailer sent out a few weeks ago are those developed through the 17-year community input process, Pinoli said.

“They think that somebody’s trying to pull a fast one on them,” Pinoli said. “We’re not pulling a fast one. Our transaction with Georgia-Pacific to acquire the mill site has been in the works since 2004. There’s no secret about that. It’s a private real estate matter.”

The transfer of the properties hasn’t ended the controversies — in fact, questions surrounding the Skunk Train may have moved up to the front burner. Stay tuned as the city and the community take stock of what the sales mean for Fort Bragg’s future.