MENDOCINO Co., 4/19/2017 — The landslide six miles north of Leggett continues to block Hwy. 101, completely closing the road. As of about 8am this morning CalTrans expects the highway to remain closed for at least a “couple days.” But aerial photos of the site show that the damage is quite substantial. CalTrans states that they will be making a statement about plans this afternoon. 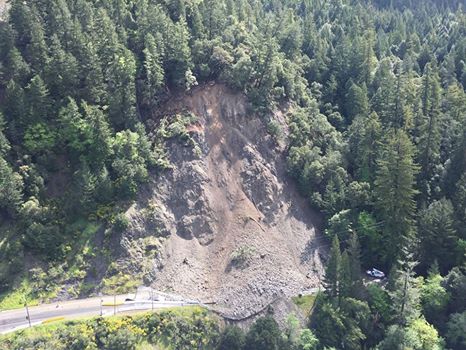 The Mendocino County Department of Transportation recommends that motorists who need to travel north of Leggett take Route 20 to I-5. According to Kym Kemp, of the Redheaded Blackbelt, a mini delivery truck pulling a U-Haul went off the road trying to travel on Bell Springs Road last night. This is at least the second accident since the closure of the 101. Sheriff Tom Allman recommends that only locals travel on Bell Springs Road. Howard Dashiell, director of the Mendocino County Department of Transportation, stated in a meeting yesterday that he does not intend to open Usal Road as a detour.

There is still one-way traffic on Route 162 at The Middle Way and Route 175 at Buckman Drive.