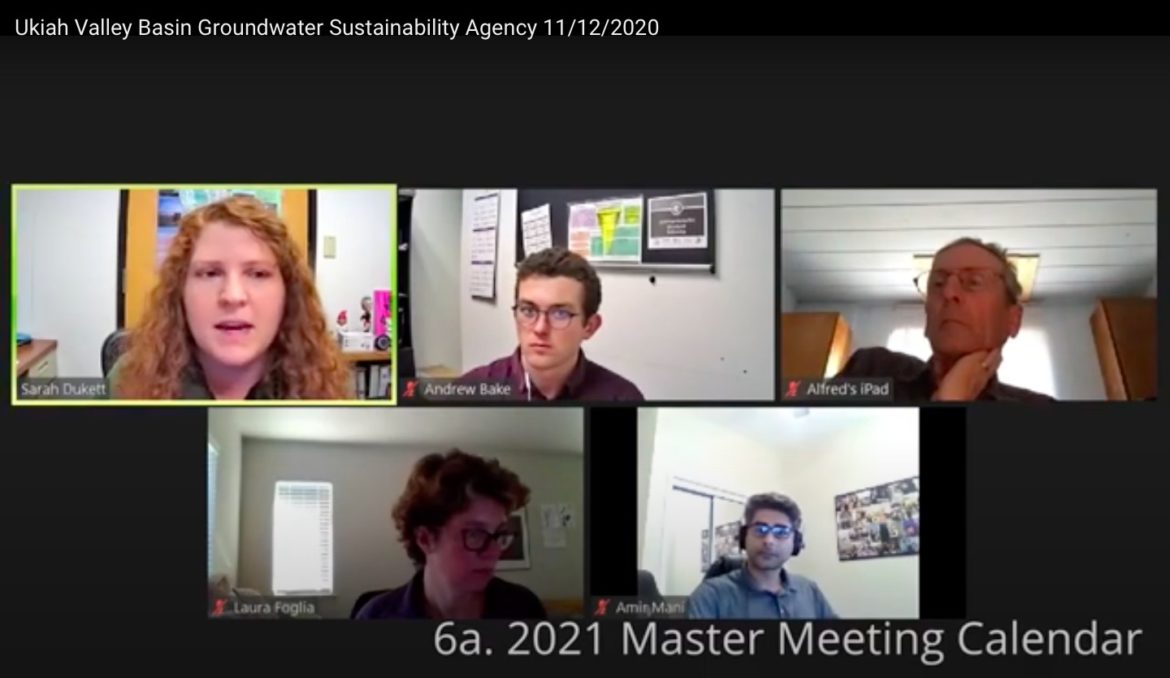 LITTLE RIVER, 10/13/20 — Plans to regulate groundwater for the first time ever in the Ukiah Valley Basin are moving forward; and though the details are wonky and a little esoteric, the results of this meeting could affect water and ag policy for years to come.

The UVBGSA is a groundwater sustainability agency (GSA), a new local agency (a joint powers authority in this case), mandated by the state, and charged with regulating the use of groundwater in a given area. It’s tasked with creating a plan to regulate all groundwater (well water) in the Ukiah Valley Basin for decades to come. Basically, the GSA will decide how much water gets pumped and how much water stays in the ground in order to avoid chronic groundwater lowering.

Although the Ukiah Valley Basin Groundwater Sustainability Agency is making progress on their management plans, there is still a lot that is up in the air. Precisely how the agency chooses to manage groundwater will dictate how residents who rely on it are impacted.

There are a variety of actions that the agency is considering in order to sustainably manage groundwater in the basin including more recycling of water, land use change, fees for using too much water, and incentives to use less, among other things. But they’re still figuring that out — gathering data, working with engineers and representatives of the community, communicating with the public, and learning about state protocol. So until they know how they’re going to manage the water in the Ukiah Valley Basin, it won’t be clear how it will impact those that rely on it.

For most of California’s history, groundwater hasn’t been regulated. But a 2014 California state law changed that. In brief, SB1168, also known as the Groundwater Management Act, requires that certain local governments manage their groundwater resources in a way that provides stable and reliable resources long into the future. That’s why the various local governments, including the City of Ukiah, County of Mendocino, and local waters districts have banded together to created a groundwater sustainability agency and is working to regulate groundwater in the Ukiah Valley basin for the first time ever. An earlier Mendocino Voice Article has more details.

The hour and a half zoom meeting that took place Thursday afternoon was packed full of information. Two private engineers presented plans for using existing data and gathering new information to inform decisions on how groundwater should be managed in the basin. Additionally, board members of the agency voted on a calendar for 2021, and members of the public voiced their concerns about how new regulations would impact them.

Currently, the Groundwater Sustainability Agency, is working on a groundwater sustainability plan (GSP), which they are required to hand off to the California Department of Water Resources by January 31, 2022. The California Department of Water Resources is responsible for approving all groundwater sustainability plans. However, before they can write the whole plan, they have a lot to get done, such as looking at historical data to make predictions about the future, adding wells to their monitoring network, and running models to forecast different future scenarios.

A presentation by Laura Foglia, senior engineer at Larry Walker Associates, took up a big chunk of the meeting. Foglia discussed how she’s working to create networks to monitor groundwater levels in the basin now and in the future and why that’s important.

The major job of the Groundwater Sustainability Agency is to manage groundwater in Ukiah in a way that will meet current and future needs while simultaneously avoiding serious economic and environmental damages. But the agency also must consistently report data to the California Department of Water Resources proving they are succeeding in this goal. If they don’t report or if they don’t achieve their sustainability goals, the state will take over from the local government and manage the groundwater system.

Getting good data now is also crucial because there isn’t a lot of historical information about the groundwater basin.

“We really want to have a network that will improve our understanding of the system. Unfortunately in Ukiah we don’t have a lot of long term data,” said Foglia. There is only long term data, over thirty years, for four wells.

“The network is really going to help us demonstrate short term, seasonal, and long term trends. It will also demonstrate to the Department of Water Resources that we are making progress,” she continued.

After a long discussion about monitoring, Foglia handed the mic over to her colleague, Amir Mani, who is a project engineer at Larry Walker. Amir discussed using computer models to create different future scenarios that could help the Sustainable Groundwater Agency make policy decisions. GSA’s are required by the Department of Water Resources to consider climate change when mapping out future scenarios. Other scenarios that Larry Walker may run for the City include different types of management such as water recycling, land use change, different outcomes of the Potter Valley Project relicensing agreement, and more.

Here is a list of a few other important things that went on during the meeting. The board approved a calendar for their 2021 meetings. The next public meeting will take place on February 11, 2021 at 1:30 p.m. Meetings will continue on the second Thursday of the month, every month, until July. In August and September there will be a two month break for public comment. Then in November there will be another meeting before the GSA finalizes their plan and submits it to the California Department of Water Resources. They must submit their plan by January 31, 2022.

Ukiah Chief Executive Officer of the Water Agency, Sarah Duckett, reminded board members that the respective agencies they represent could potentially vote different members to represent them in the GSA board.