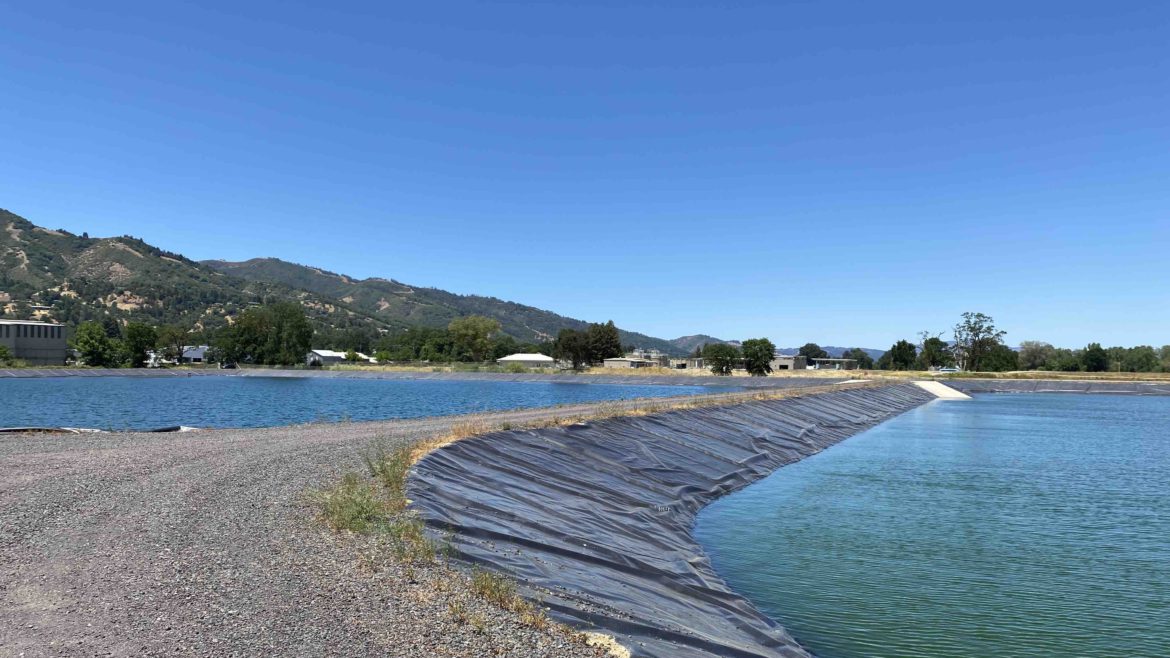 UKIAH, 5/20/21 — With water supplies running low in communities around Mendocino, water managers across the county are encouraging users to reduce and reuse, but only one district is recycling, at least on a large scale.

Most water districts in the county are preparing for or reacting to water shortages. But Ukiah still has water to go around. One reason for that is their water recycling program, which saves around 1,000 acre feet of water per year, and accounts for one-third of their total use.

Historically, Ukiah used a mixture of Russian River water and aquifer water to supply the resources necessary for irrigation, municipal, and household uses. But in 2019, the city’s water recycling plant went online, adding a third source to the mix.

Annually, the plant makes approximately 1,000 acre feet of recycled water, so the City can leave that same amount in the Russian or Lake Mendocino, taking pressure off a system that is stretched too thin and leaving more water for other Ukiah Valley water districts to use.

Around California, water managers, politicians, and other local leaders are thinking about how to create a more sustainable, resilient water system at the same time as climate change is making precipitation more variable and summers longer, hotter, and drier. And increasing recycled water use, among many other things, is one option on the table. It’s clear that communities like the town of Mendocino, where the district superintendent expects wells to run dry by fall, could use 30% extra water right now.

Recycled water is treated sewage water that is cleaned and disinfected through a variety of filtration systems and chemicals until it is fit for human use and complies with State Water Resources Control Board recycled water regulations. In Ukiah, after going through regular wastewater treatment plant processes, the water goes through a sand filter and then is put in a tank with chlorine before it is distributed to public schools and parks and private farms and vineyards both within and outside of city limits.

The City of Ukiah gives away all the recycled water for free. Sean White, the director of water and sewer utilities for Ukiah said they do so to incentivize water users to go with recycled rather than river water and take pressure off the Russian River system. Some people have water rights that allow them to take from the river for free, and besides that, water in the Ukiah Valley is really cheap — only $47 per acre foot or 325,851 gallons according to White. So in order to convince people to use recycled water rather than do their usual thing, the city gives away free, pressurized, recycled water. White explained that in other places where water has a higher price tag, recycled is usually sold for closer to half-off.

Ukiah’s recycled water is not potable, but in other parts of the state, and the country, recycled water is turned back into water that is safe for drinking, bathing, etc. through reverse osmosis or dilution. However, White said that the City is not planning on taking that extra step, which is costly and often uses an immense amount of electricity, any time soon.

Ukiah may be doing far better than most other communities in the county during the drought, but to be fair, their water recycling program is far from the only reason they’re counting dollars while everyone else is counting change. Ukiah has a pre-1914 water right, which essentially gives them first dibs on much of the surface water in the region and the city sits on top of a giant aquifer that provides ample storage.

But still, the city’s recycling program has allowed them to offset one-third of their total annual use, and that’s a big deal.

“We’re producing about 1000 acre-feet of recycled water a year,” said White, standing in front of three reservoirs near the Ukiah wastewater treatment plant during a recent tour. “The city in general and all sources combined uses around 3000 acre feet [per year]. So basically a third of our supply is now being offset by this project. So 30% conservation every year.”

The recycled water is stored in three ponds that have a total holding capacity of 66 million gallons of water and are lined with thick shiny, black plastic that stop the water from being absorbed into the ground. The water is pressurized and pumped through an eight mile pipe to the various vineyards, farms, schools, and parks, where it is applied.

Recycled water projects may be effective but they are definitely expensive. The City of Ukiah spent $34 million to get their program online, and running it brings the wastewater plant’s annual budget up by around $200,000 a year, to a total of around $3 million.