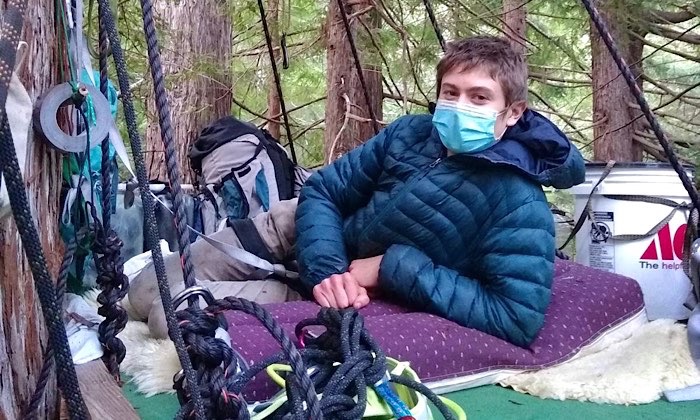 WILLITS, 4/9/21 — Protesters, aided by Earth First, have begun a tree sit in the western portion of Jackson Demonstration State Forest, against Cal Fire’s plans to log significant portions of the forest, asking that Cal Fire return to the table for talks. The Forest is a working “demonstration forest,” meaning that unlike in a typical state park, it was actually set up as a place for Cal Fire (AKA the Department of Forestry and Fire Protection) to hone and practice logging techniques with the goal of demonstrating best practices for sustainable forestry.

However, in recent years this state goal of the forest has come into question, and organizations, including the Mendocino Trail Stewards, and the Coyote Valley Band of Pomo Indians, have asked for modifications. However, the Trail Stewards have made clear that they are not affiliated with the protest and do not as a group support the protesters.* One proposal from conservation groups asks that the western section of the Demonstration Forest be turned into a preserve, rather than a working forest.

Here’s the press release from the protesters:

Caspar CA –At dawn this morning a small platform with a tree sitter perched atop it could be spotted 65 feet up in the tall redwood tree affectionately known to locals as the Mamma Tree. Located in the heart of Jackson Demonstration State Forest (JDSF), near the tiny town of Caspar, the Mamma Tree is at the center of a passionate controversy, familiar not only to Mendocino County residents but to State, National, and Global communities as well: to cut or not to cut down big old trees. Are such trees more important to keep standing for their carbon sequestration, cultural, environmental and recreational values or for business and profit, to be converted into redwood decking and fancy houses?With logging imminent and no legal recourse yet in sight, a tree sitter calling himself Greasy Pete climbed into Mama tree and has taken up residence, commenting: “I am the Lorax, I speak for the trees.” A long banner suspended from the platform reads: “Save and Protect Jackson State, the Forest of the People”, also bearing the message: “If a tree falls in the forest We, the Concerned Citizens, are here and we would hear it!”Standing at 77” dbh (diameter at breast height) just off a well used trail, Mamma Tree is marked for cut, a blue line spray painted around her approximately 240” circumference. According to Calfire – the managing agency for THPs including in JDSF- coring shows the Mama Tree is just under 200 years old, an age most would consider Old Growth. Mama is in the growth stage known scientifically as mid-to-late Seral, when redwoods acquire the characteristic large limbs and craggy cavities that make good habitat for Spotted Owls and other endangered species. Many people visiting the area express shock that trees as big and old as this, especially in a publicly owned forest, would be cut down, calling it “mind boggling”.Many of the Mama Tree’s nearby 100-plus year old relatives are also marked for cut and have been sold to Willits Redwood Company, owned by ex-Willits Mayor Bruce Burton and partner Chris Baldo. Anderson Logging is the LTO (licensed timber operator) contracted to cut the trees and haul the logs inland over highway 20 to the Willits Redwood log deck near the intersection with Willits’ Main St. (formerly 101). Logging in the 48,000 acre mixed use State Forest accelerated under former President Trump and now impinges on recreational and residential uses, coming right ‘up to the bed sheets’ of campsites, trails and adjacent private homes. Notably, THPs and logging roads impact historic Indigenous trails and archeological sites. Although supposedly protected by confidentially laws, the significance and extent of sites are often minimized and underprotected, resulting in financial gain for contractors and the State.JDSF has been owned by the State of California since 1948. It provides clean, green, affordable outdoor recreation, habitat for rare and endangered species, clean water, fresh air, and urgently needed carbon sequestration. Originally dedicated to the demonstration of sustainable forest practices, restoration and recreation, the timber industry has taken full advantage of the public trust. Today, over half the area has been logged multiple times. Continued logging on the steep and fragile slopes of the Noyo River, Big River and Little River and tributaries crisscrossing Jackson, threatens already precarious runs of Coho and Steelhead salmon with increased erosion, siltation and low water levels.The effort to protect these forests is community based and multigenerational- local children have been actively involved in the efforts to save the Mamma Tree and her family, using yarn to attach art work with heartfelt messages and pleas to save the trees which are their heritage as citizens. “I grew up in Nature, in the forest”, said nine-year-old Rowan, who attended the nonviolence training offered to activists last week. “I’m a super tree lover so I want to protect it”.

*Correction: An earlier version of this story mistakenly said that the Trail Stewards were “backing” the protest. A representative of the Stewards made clear to us that they do not back, nor have they lent any material support, to the protesters. We apologize for the error.