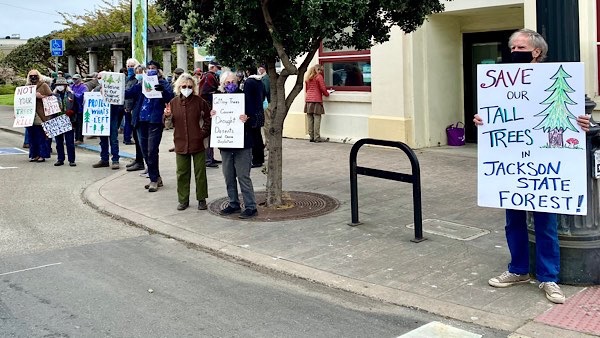 FORT BRAGG, 4/16/21 — Around 30 people gathered in front of Fort Bragg City Hall at 4 p.m. this afternoon, to protest plans by Cal Fire to log in the western portion of Jackson Demonstration State Forest.

This is just the latest event in a conflict between the California Department of Forestry and Fire Protection (Cal Fire), which managed Jackson since 1947, and local conservationists.

For almost a year, local group the Mendocino Trail Stewards has been working through administrative routes advocating to alter the forest management plan. One of their proposals has been the creation of a 20,000 acre reserve on the west side of the forest. In February, the Coyote Valley Band of Pomo Indians, concerned about the treatment of their ancestral territory and the impact of logging on climate change, requested a government to government consultation to discuss Cal Fire’s forest management plan. Just last week, a tree sit started in Jackson Demonstration and on Monday around 50 people gathered at 4:30 a.m. in the morning on a Jackson logging road, ready to block loggers from driving to begin operations, should they arrive.

On the corner of Main Street and Laurel Street, protesters stood with their placards raised in the air, and one man played the drums.

“There shouldn’t be logging in the way Cal Fire is doing it — not taking climate change seriously,” said Genevieve Mullins, an active member of the Trail Stewards. “The way they are logging is outdated.”

However, the nascent movement now opposing Cal Fire, which includes to various levels of involvement — the Trail Stewards, Earth First, and independent activists — has not unified around a common set of goals for their protest or long term request for the forest. At the moment, many protesters are focused on a pause to logging plans so that public conversations can begin. Long term some speak of rededicating Jackson to something more like a state park, while others want to maintain its status as a “demonstration forest,” but with a new focus on fire resiliency and carbon sequestration.

Ana Marie Steinberg, who has been fighting against logging in Jackson for decades helped organize Redwood Summer, said she was glad to see people out in the streets.

“You need the public to know what’s going on,” she said. “Word has to get out and people have to rise up.”

“Jackson State Forest is a working experimental forest,” said Eng in a phone call earlier this week. “Which means that logging will be going on pretty much all the time, maybe not every day. That’s our model and that’s what we do.”