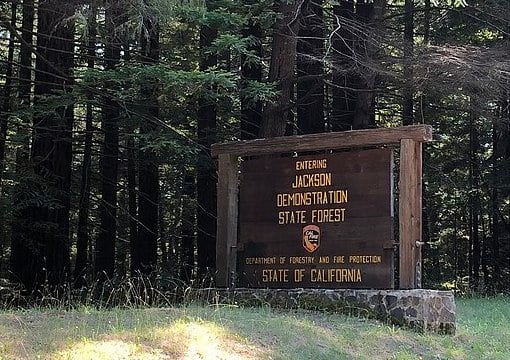 FORT BRAGG, 4/19/21 — Cal Fire won a civil court case last week that should allow it to eventually close, and destroy a state owned road in the Jackson Demonstration State Forest (JDSF) that in-holding property owners have used to access their property for 75 years.

The legal actions filed against Cal Fire by the property owner have been one of the longest lasting disputes in Mendocino Superior Courts, stretching over more than a decade and filling hundreds of pages in files.

Mendocino Superior Court Judge Clayton Brennan ruled on April 12 that just because Cal Fire allowed use of the road all along, didn’t mean they were legally required to continue to do so. Cal Fire decided in recent years not just to close the road, but to destroy it, necessitating that the property build a new road through the property of neighbors — if that can be accomplished. The judge granted summary judgment in one case and also dismissed the claims of the property owner in a second lawsuit, both of which had been filed to retain access and/or block closure of the road.

The plaintiff, Maribeth Mercado White, sought to establish right of access to her 40-acre parcel of land over the road owned by Cal Fire. Her property is in the midst of JDSF, although there are other neighbors on one side. The road starts at a gate at the end of Mitchell Creek Drive, located just south of Fort Bragg off Simpson Lane.

“The dispute has been long and convoluted,” Brennan’s summary of the case begins. The judge then went through that history, starting with legal actions White lost to gain legal access in 2014. Cal Fire then won again at the appeals court level. Following that:

“Cal Fire attempted to formalize Ms. White’s use of the road through a use agreement. Cal Fire sent a letter in June 2017, which was ignored. After Cal Fire did not receive response to that letter, and the private equipment operator hired by Ms. White did work on state property without any authorization, Cal Fire notified Ms. White of its plan to decommission the access road,” the judge wrote.

Then, two more lawsuits were filed on behalf of White by White’s husband, Mendocino attorney Rod Jones. The new lawsuits made new legal arguments, including the claim that Cal Fire had always promised to allow White, or subsequent property owners to use the access road.

“Plaintiff [White] maintains that the facts have now materially changed because Cal Fire has decided to decommission the road and completely deprive the plaintiff of access which it had previously promised to guarantee. The record is clear that Cal Fire never promised that it would allow plaintiff to use the road for all time,” Brennan wrote.

The judge has paved the way for the road to be closed, destroyed and allowed to go wild after 75 years of use. Jones has said Cal fire misled him into thinking negotiations to use the road were continuing while at the same time finalizing specific road closure plans that he was not told about.

“This is just another human tragedy inflicted by a soulless government,” said Jones by email when asked for a reaction to the court decision.

“CDF has publicly said it doesn’t need the road and that’s why it wants to close it. Which, of course, is not the real reason. It wants to do this simply to inflict harm on the owner and the existing residents. But why? The agency won’t say,” Jones said.

“No, I don’t think there was any malice. This is a road not needed for the management of the forest. Given our mission to manage the forest, and all the resources within it prudently, decommissioning roads that are not needed for our management is one of those things that we try to do, across the board,” said Conway.

Conway wasn’t ready to conclude that the case was over.

“We have thought we had conclusive resolutions of this case in the past and that turned out to not be the case,” he said.

Jones has not said if he will appeal. The appeal would go to the same appeals court that denied the appeal back in 2014. White no longer lives at the property and has been in the process of selling it to John O’Brien.

“If this is the final resolution, we will encourage them to pursue their other options, which are adjacent private properties. While no decision has been made on a timetable, and we plan to give them a reasonable time, our ultimate goal is still to decommission that road and reclaim some of the habitat,” Conway said in a telephone interview.

Removing old logging roads is a key effort in forest management especially where streams and erosion are present, but that was not the reason given for the closure of roads 515 and 516. The road is not said to be causing damage to the environment or blocking any streams. The property owners have maintained that constructing a new road will cause greatly more environmental damage than any benefit from closing a road. The reason specified by Cal Fire is, simply, “not needed for forest management.”

John O’Brien is a climate scientist who is the current resident of the property and has been in the process of purchasing it. He says the environmental cost of building a new road is huge and points out the road existed in 1946 before CalFire purchased the land for JDSF.

He says that at an earlier point in the case Brennan said the residents would have to “parachute in” to access the property if the road were closed. He says it is illegal to build a road through the neighbors without an easement.

“His ruling to side completely with Calfire and let them decommission the road goes against everything he had said before. If Calfire proceeds with decommissioning the road, we will have to parachute in… and the property will be effectively worthless… and not to mention so will PG&E to maintain their transformers and power lines out here. It’s gonna create a huge fire hazard for the surrounding properties and forest,” said O’Brien in an email interview.

“Brennan’s ruling to side with Calfire goes against all common sense and is a complete failure of the court to provide relief in a situation where there is no previous case law precedent. As if Calfire is the one here who needs relief…Everything about this, from Calfire’s behaviour to Brennan’s ruling defies logic and common sense. His ruling ensures this case drags on, the courts burdened, and more taxpayers dollars wasted. This is a perfect example of why no one has any faith or trust in the judicial system or our state agencies anymore,” O’Brien said.

On a tour of the road in January, it was clearly well maintained with care seeming to have been taken not to disrupt the habitat it goes through. Although trash dumping is common in the area, there was zero trash along the road. Part of the reason it was so clean was the Mendocino Trail Stewards teamed up with Erik Wahl of Cal Fire to remove over 15 cubic yards of illicitly dumped trash from the road and the nearby Mendocino Cypress Woodlands said Chad Swimmer, of the Stewards, after the last article was published.

O’Brien said the ruling leaves no good option for the property and violates California state policy against creating landlocked parcels.

“I have to imagine if Calfire bulldozes the road and locks me and my family back in here that wouldn’t look very good for their public image…So I guess that’s the game we play now, we’ll see. Thanks Brennan,” said O’Brien by email.