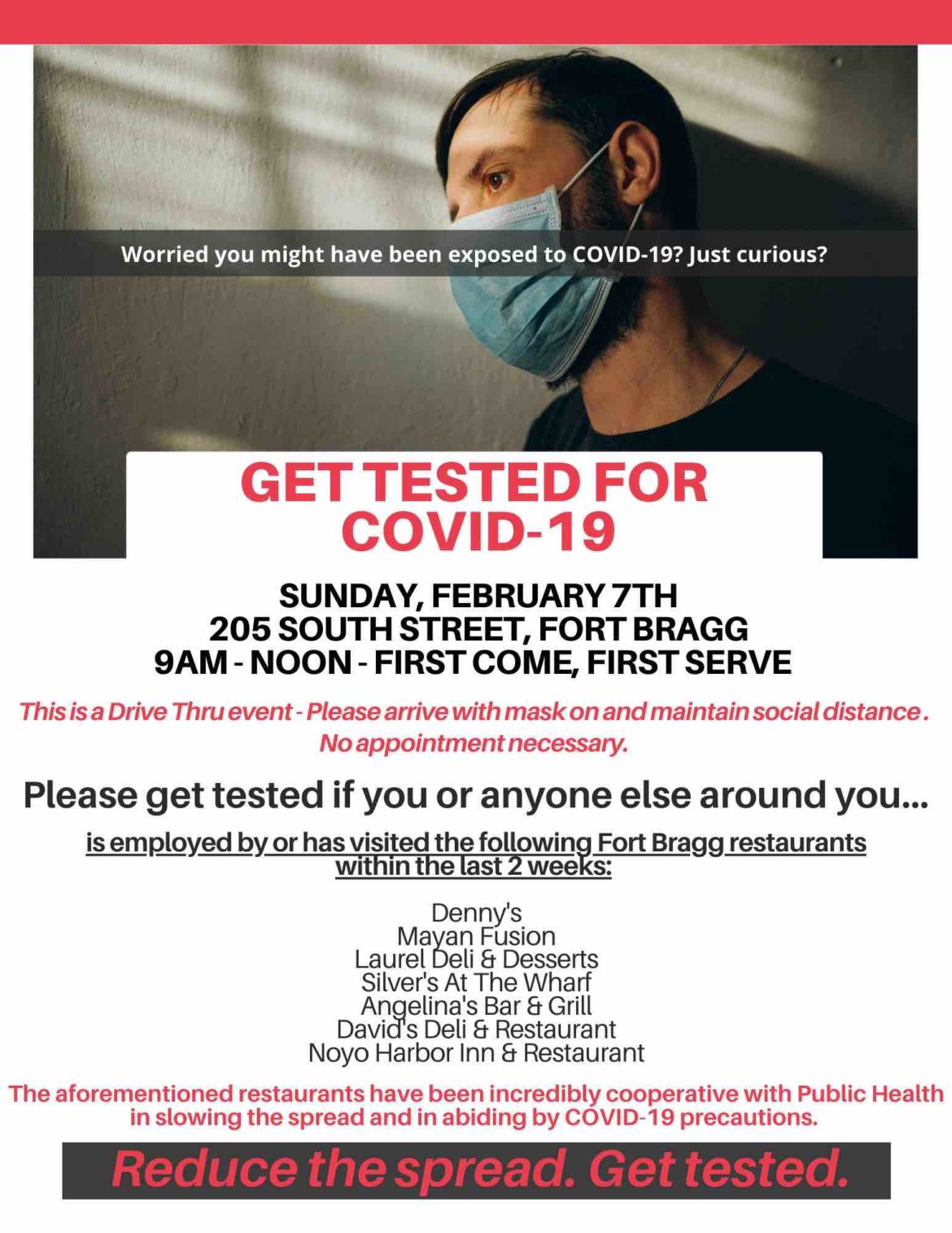 FORT BRAGG, 2/5/21 — A Mendocino County Health Department Facebook notice that advised anyone who visited or worked at any of seven different Fort Bragg restaurants in the last two weeks get tested for COVID-19 this coming Sunday has raised questions. Has its late release created confusion about the current safety of restaurants that have cleared all COVID protocols? And did it come too late to help?

Restaurant managers say they were cooperative and fully dealt with the outbreak in mid January. The Feb. 4 notice has given some the impression that there might be a problem for those who visited in recent days.  By then, several of the restaurants had already closed, quarantined fully and reopened.

Each restaurant said they followed all COVID-19 related advice, including deep cleaning, closing down and testing all those potentially exposed, with all subsequent tests reported as negative. The County Health’s Facebook page post on the issue called the restaurants’ “incredibly cooperative in slowing the spread and abiding by COVID-19 precautions.”

For example, when a Fort Bragg Denny’s employee tested positive for COVID-19, that person called into work with the news. Manager Tammy Johnston immediately decided to close the restaurant. The employee did not return to work then and went into quarantine. Instead of opening on Jan. 23, a deep cleaning was undertaken and staff all went for testing with Denny’s remaining closed for 10 days.  All other tests came back negative, Johnston said. To be safe, the restaurant was kept closed until Tuesday, Feb. 2, , she said. Denny’s insists on mask wearing at all times, even when the server comes to the table, she said.

On Thursday, Feb. 4, the county health department posted on its Facebook page advising anyone who visited any of the seven Fort Bragg restaurants in the past two weeks, to get tested for COVID-19 at a drive-thru event for this outbreak for Sunday, Feb. 7 from 9 a.m to noon at 205 South Street, Fort Bragg (first come- first served.)

Scott Schneider, general manager of The Noyo Harbor Inn & Restaurant,  questioned telling people they should worry about the last two weeks at his restaurant. Schneider said one cook shared with Mayan Fusion tested positive but the man has not worked at Noyo Harbor Inn & Restaurant for at least two weeks. Since the test, the Inn has been deep cleaned and all others who may have been exposed to the cook have been tested, with all tests negative. Schneider says the county usually calls and discusses information before releasing it publicly.  This time the post was made to social media and quickly came back to the restaurant.  He said he was trying to contact the health department to remove the eatery from the list as it is creating worry and problems.

At the press conference, Dr. Andy Coren, county health officer, said that the information did come out “ a little late.”  Part of the problem was that one of the infected people, who “was a key index case” was “very reluctant to talk to our investigator.”  He said he had gotten on the phone with that person himself as part of eventually successful efforts to find details of where that person worked and who the person might have been exposed to.

“We had to convince the person this was not going to be a case where documentation or loss of license was going to be a factor,” Coren said.

Coren said getting tested Sunday is a good idea even with the time frame.

“I agree it is delayed. Yes, testing still makes sense. Contacts can still spread into other people and there will be cases. And with our testing we can uncover them and help insure this doesn’t lead to other outbreaks,” Coren said.  Coren said the possibility of getting infected from buying take-out food is extremely remote, so most of the effort is to get coworkers to be tested.

Scott Orey, owner of the Laurel Deli, said one cook tested postive The man also works at Mayan Fusion. When Orey heard about the positive test, he immediately closed the Laurel Deli and went into quarantine with everyone else who had come into contact with the cook.  Everyone was tested and those tests have all come back negative, Orey said.  Laurel Deli was closed for 10 days, ending this Monday. The cook who tested positive can come out of quarantine this Sunday, Orey said.

Mayan Fusion describes a similar closure and similar safety protocols on its answering machine, where a message was left but not immediately returned.  The Wharf posted on Facebook that it has had 5 cases, one as recently as Feb. 1.

“What you need to realize is: just about everyone in Fort Bragg works 2 to 3 jobs and the County needs to keep track so they can slow the spread. You can have one kitchen staff member who works at three different restaurants; therefore, the county must list all three restaurants,” the Wharf’s Facebook post states.

“The Wharf has followed all procedures given by County Public Health very closely and diligently. We have made it a policy that employees must distance themselves from each other as much as possible and to always wear their masks. We are doing the best we can to keep our customers and our staff as safe as possible as we continue through this pandemic,” the Facebook post states.