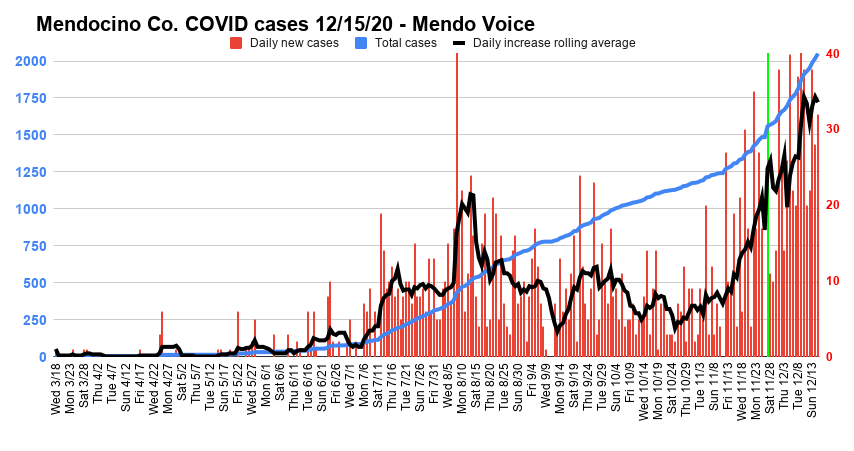 This graph shows total case count in (left axis). On the right axis are the daily increases, as well as a 7 day lagging rolling average of increases. The green line is the day after Thanksgiving.

WILLITS, 10/15/20 — The Mendocino County Board of Supervisors began their COVID-19 discussion on a grim note yesterday morning, with CEO Carmel Angelo saying that county officials had begun a review of their “mass casualty plan,” in preparation for the spike in hospitalizations and deaths that will trail this surge in new cases by a few weeks.

Said Angelo, “That really is where we are.”

On the subject of COVID the supervisors heard news about the progress of the pandemic — a surge unlike any seen before. Also discussed was the imminent arrival of the Pfizer vaccine, with many as 975 doses for frontline medical workers to arrive as soon as Wednesday, and Humboldt County already having received its allotment. Still, Mendocino Public Health Officer Dr. Andy Coren cautioned that the vaccine would not mean and end to social distancing and masking any time soon. Coren explained that the vaccine may only lessen the severity of the disease, and may not halt its spread, adding that it will likely not be until summer that Mendocino County receives enough doses to hit the 70% vaccination rate needed for herd immunity.

Also discussed were the availability of ICU beds, and the broader state situation. Across California spare ICU beds are more sparse than at any time in modern history. The San Joaquin Valley is completely without additional ICU capacity and Los Angeles County now has fewer than 100 spare beds. The state has ordered 5,000 body bags, to be mostly distributed in SoCal — and an additional 60 refrigerated trucks are on standby to deal with the surge in corpses which are expected to surpass the region’s mortuary and coroners’ capacities.

Officially the Northern California region, into which Mendocino has been lumped, has a remaining 29.8% ICU capacity (as of Tuesday evening), however, with other regions of the state now overwhelmed, local doctors warn that out-of-county transfers could soon fill up local ICUs, and Dr. William Miller of the Mendocino Coast Hospital, stated last week that he has already had requests for transfers from as far away as San Diego.

As such, residents of Mendocino County should expect the far more restrictive regional stay-at-home order to go into effect soon. Coren guessed that Mendocino’s ICU capacity would be filled up in the next one or two weeks. The three hospitals in the county, all managed by Adventist Health, have a total of 16 ICU beds between them. At that point Coren cautioned that the level of care, not just for COVID patients, but for everyone in the hospital would begin to decline, as staff and resources would be stretched thin.

Coren added that in such situations, where hospitals are overwhelmed with people suffering from a highly infectious disease, people without the disease begin to avoid seeking medical care, resulting in still more deaths. He mentioned the hypothetical case of someone suffering from cardiac distress, who, fearful of dealing with a COVID-overrun hospital, stays home rather than seeking treatment, and so dies.

Of course, “ICU beds” refers not just to literal beds and equipment, but also to levels of staffing and expertise necessary to care for ICU patients. Adventist has said that if need be they have the ability to surge up to caring for 45 ICU patients, though this would certainly stretch hospital staff thin. There are other contingencies in place for surge capacity for ordinary hospital beds.

The worst is yet to come

In his presentation before the board the usually chipper Coren was at pains to stress the severity of the situation now facing the county and the nation, “From a statistical point of view, and talking very closely to our colleagues in Southern California — it’s not getting better, it’s getting worse…it’s going to be really worse than any of us have seen in our lives especially if you need a hospital for whatever reason. There are not going to be the beds, there‘s not going to the beds, there’s not going be the personnel to staff those beds.”

Both Coren and supervisors expressed frustrations over the failure of people to follow social distancing and masking guidelines. Said Coren, “Many people just don’t believe how terrible this is even as the United States approaches 300,000 COVID deaths. So the problem is minimal compliance — the more we say, the more people disbelieve, the more we order, the more people dig their heels in and have fought back. This is not everybody, but it’s enough that our attempt at writing orders have been undermined.” In fact, the U.S. surpassed 300,000 deaths a couple days ago.

Later in the meeting Dr. Coren echoed the CEO saying, “To respond to our current situation…we’ve discussed looking into the availability of mortuary resources and also to looking into the mass casualty plans, with an eye to possibly using the fairgrounds, or some other places, for a medical tent to mitigate a possible disaster that lies ahead.”

He added that while is hopeful that next year will be better, it is very important at this critical time to limit gatherings to a single household, not extended family. He and other doctors have said that travel for Christmas and even local Christmas family gatherings are extremely ill advised, though Coren noted that, “during the holidays [this] is very painful.”

In response to questioning on the enforcement of prohibitions on large gatherings and crowded dining, Coren noted that close spread within households from much smaller gatherings of even just immediate family is accounting for a great deal of the spread of the virus, not just larger gatherings.

Not only is the total number of cases growing rapidly — cresting 2000 yesterday and hitting 2051 today — the rate of growth is accelerating with the average number of new cases, according to data from Mendocino Public Health, now at 34 per day, up steeply from two weeks ago, before the “Thanksgiving surge,” when it was 24. Tuesday’s count of 2051 cases means that around 2.3% of Mendocino residents have contracted the virus. If there is a silver lining to this, it’s that so far Mendocino’s death rate has been closer to 1% of confirmed cases, lower than the national and state averages — though, given that cases have doubled in just over two months, and that deaths are a lagging indicator, this metric could swiftly change.

It must be remembered that the effects of viral spread are delayed from the causes. The risky behavior, public gatherings, travel, and a general lack of social distancing during the Thanksgiving holiday, are only now resulting in this present “surge upon a surge.” However, many people now testing positive, or beginning to feel ill, will not be sick enough to be hospitalized for another couple weeks. And of those, a score or more are expected to die in the coming weeks, though that number may spike higher as medical resources are stretched thin.

Explained another way, on October 7 Mendocino County had only seen 1025 confirmed COVID cases, almost exactly half of Tuesday’s count. At that time 21 people had succumbed to the virus, since then three more have. So, given a similar death rate, roughly an additional 18 people who have since tested positive would be expected to die in the coming weeks. If the case rate remains stable, neither growing nor shrinking, the case count can be expected to once more double in the next two months. At the roughly 2% national COVID mortality rate, that would mean another 50 or so dead, depending on where the cut off is.

However, if a similar level of travel and gathering is seen for Christmas diners and New Year’s parties, we could be seeing a surge upon surge upon surge. Such spread could mean such rapid growth of the virus that local medical resources would simply be swamped, not only for people suffering from COVID, but for all people who are ill or injured.

Small number of vaccines will be distributed

On a slightly more hopeful note, supervisors also heard news from Ignacio “Nash” Gonzalez, in the county’s disaster office, that 975 doses of the Pfizer COVID-19 vaccine are expected to arrive in the county tomorrow, Wednesday. Though the county’s health office has had a hard time procuring one of the ultra-cold freezers required to store the fragile mRNA vaccine, local hospitals do have such machines and will take on the initial task of storing the vaccine. However, the county’s health department will be responsible for administering the vaccine, and will follow the ethical triage standards established by the state, whereby medical workers including doctors, nurses, and other essential hospital staff such as kitchen and cleaning workers, will be administered the vaccine first.

Gonzalez said that an additional 400 doses of the Moderna vaccine would be forthcoming next week. Both vaccines require an initial dose and a booster about four weeks later.

But Coren cautioned that the vaccine would not put an immediate end to the pandemic precautions. Coren explained that there is some evidence that at least the Pfizer vaccine may only reduce the severity of the disease, meaning that people could still spread the virus. Thus, even after widespread inoculation, social distancing and masking will remain vitally important.

Flattening the curve once more

Towards the end of the COVID portion of the supervisors’ meeting, Supervisor McCowen attempted to refresh people’s memories of the early days of the pandemic, saying, “We were at that time told we would have 36,000 cases, 3,600 hospitalizations, 1,800 in ICU, 450 deaths. The only question [was], ‘Do you want that all at once or do you want to try to spread it out over a year so you don’t overwhelm the healthcare system.’”

Some minutes later Dr. Doohan, the former public health officer and now deputy-health officer responded to McCowen’s comment saying, “…if we look back at what we did at the beginning of the summer, that flattened the curve and slowed the spread.” She elaborated that, had all of the cases that have so far occurred been bunched into one month, “We would be in surge tents and parking lots. So right now we have the opportunity to stop it again, to stop the spread, we know what to do…it’s just extremely, extremely hard to do it, and it comes at great individual personal cost.”

But she added that if we don’t slow spread, “All of it’s going to happen all at once.”