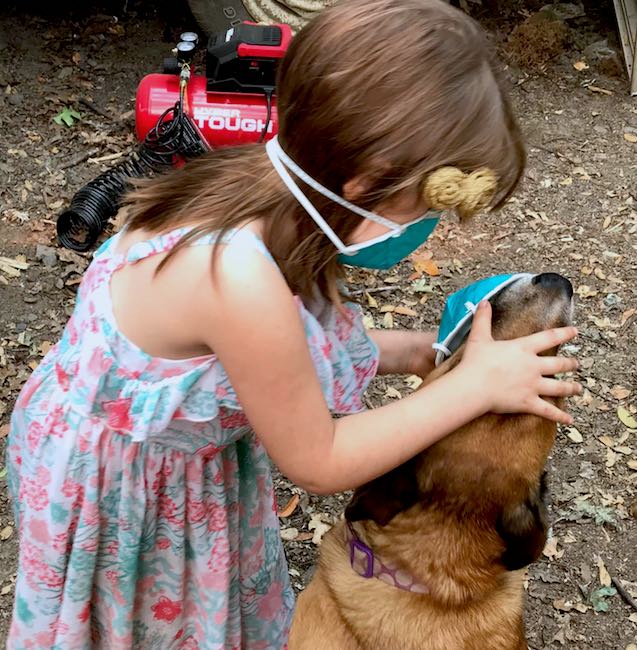 Bella puts a mask on Zander the dog. This photo was taken during the poor air quality caused by the Ranch Fire, but it's still cute - photo by reader Dolly Brown.

Publisher’s note: If you live on the Mendocino Coast and would like to see more reporting like this from Coast-based freelancers, consider supporting local journalism by becoming a member (we’ve recently made it much easier, just click the link). And when you do, write us a note telling us you want more Coast reporting. If we get enough members on the Coast we’ll be able to hire a full-time Coast correspondent.

FORT BRAGG, 7/28/20 — So far just one person has been cited for not wearing a mask in all of Mendocino County, (including all four cities) the Fort Bragg City Council heard Monday night — but that may change quickly. At the July 27 meeting, the City Council voted to give City Manager Tabatha Miller the power to create an immediate executive order to impose what the council agreed on: eliminating a 24-hour warning period for those caught not wearing a mask publicly indoors, or within 6 feet of a non-family member. That ordinance will likely go into effect today or tomorrow.

The actions bring the city into alignment with the other cities and the county in how to deal with the unmasked. Most of the changes to align and sharpen enforcement in the four cities have also happened in the past week.

The Council also extended renter’s protections from eviction, an action enable by the governor; and there was a progress report from the renaming ad hoc committee.

The new masking regulation will also increase fines to roughly match those on the books in the county and now Ukiah, Willits and Point Arena as infractions, not misdemeanors. By making these violations infractions, rather than misdemeanors, the various municipalities are bypassing the need for judges and jury trials that a misdemeanor might entail, and allowing the violations to be delt with administratively, like with a parking ticket.The city’s new fines will be $100 for the first violation, $250 for the second and $500 for the third. Fort Bragg police officers will still have the discretion to issue a warning. The council left it up to the police department whether to use community service officers to issue those citations.

The first ever $100 county citation happened Saturday in the village of Mendocino when an unidentified person was warned by a Mendocino County law enforcement agent. When the person was encountered again a few hours later, still not wearing a mask, a citation was issued, the council heard.

The council ceded some of the public process and its own final authority by allowing the city manager to issue the order. Such orders have been used in Southern California to quickly respond to the COVID crisis, the council heard. Under normal conditions, the council would bring back an urgency ordinance to review the language and conduct a second vote. In this case, the city manager, following the council’s wishes, will write an order to go into effect as soon as Miller can write it, which she said would be Tuesday or Wednesday.

“I like what I’m hearing. It’s time to remove the 24-hour warning period. I think people have had enough time to be educated on that,” Councilman Lindy Peters said.

“We can’t wait. We can’t put this off anymore. We have to act immediately to protect the people of our city. I support giving authority to the city manager to issue the order immediately,” said Mayor Will Lee.

“Let’s go with the county ordinance and be consistent that way,” said Councilwoman Tess Albin-Smith.

Masks are not the only worry of local jurisdictions about violations related to COVID. The county will soon be considering hiring a private security firm to monitor people in quarantine, supervisors heard this week. Other examples would be large backyard parties or indoor gatherings, which have been reported happening all over the county, despite health orders banning them.

Monday’s council meeting started with a bang. A 2.6 magnitude earthquake, centered just north of Fort Bragg, hit at 5:30 p.m, just as the council was gathering from home on Zoom for the 6 p.m. meeting. The council also heard about a terrible four car injury crash downtown on Monday in which one driver rear ended another car, with three cars ahead also being rear ended, a fire hydrant being broken off, hospitalizations and emergency repairs.

Police Chief John Naulty referenced the crash and the hours of post crash investigation needed as an example of the kind of thing officers might be doing when calls about masks come in.

Nautly said he was comfortable with the new order and said the council had “nailed it.”

“The infraction is another tool for us. It creates a lot of work for city hall and the administration to deal with this paperwork that is going to come to them,” Naulty said during the council discussion with staff.

Nautly explained that the citation would be dealt with administratively, not in the court system. He said if mask citations were sent to the district attorney it could involve jury trials, defense attorneys and be expensive. Instead, city hall would have to deal with it like other city citations, such as parking tickets.

Officers from the County Health Department’s Special Investigations Unit have gotten more involved in enforcement across the county and came to the coast over the weekend, investigating reports of people not wearing masks on the Coastal Trail, but not finding any violators. Naulty was pleased that SIU officers will take a leading role in helping enforce the public health orders in all the cities and county.

“They are the experts in this field. They are health officers,” Naulty said.

The Council, city manager and chief advocated for a plethora of education efforts about mask wearing —  from proposed new commissioned artwork featuring Paul Bunyan (or a seagull) in a mask to possibly getting a roadside police message trailer to greet tourists with a brightly lit message about the local mask law. The “Mask Up Mendocino” education program features educational ambassadors who will give out masks and hand sanitizer provided by the state. The county’s Chambers of Commerce and Visit Mendocino are involved in the effort.

Masks are now required statewide, but each county has different health orders and each city has different punishments. Miller described West Hollywood’s fine structure of $300 for the first infraction going up per violation to $1050, $2050, and $5000.

Chief Naulty described many difficulties with enforcement, from confusing aspects of the local and state health orders, to police officers having to figure out whether people closer than six feet from each other are family members or not because one can legally be as close as desired in public to those with whom one lives, with but not strangers.

By a 4-1 vote, the council extended through September eviction protections for renters unable to pay because of COVID economic conditions. In March, Gov. Gavin Newsom gave cities the previously unavailable right to protect renters from eviction orders as the COVID crisis began. Fort Bragg was a city which took advantage of this and has extended protections monthly to match the state’s extension of these provisions, such as giving an extra 60 days for renters to respond to court evictions.

Councilmembers discussed the difficulties for both landlords and tenants. Vice Mayor Bernie Norvell, who cast the only “no” vote, pointed out that the county had elected not to extend its ordinance protecting renters from eviction — the council had just finished saying it needed to be consistent with the county in the mask ordinance. Norvell expressed worries from landlords that the city might be contributing to the debt load of its property owners. Councilwoman Jessica Morsell-Haye said she is a landlord, who is also eating the cost of utilities included in rent and is sympathetic to the position of landlords.

“I’ve heard from tenants as well, who are terrified. People are scared. People feel really vulnerable right now. Being able to tell them the ordinance is in place gives them some degree of comfort and that the City Council realizes the difficulty of the situation,” Morsell-Haye said. A practical result of the extension means protections will likely last through the end of 2021, a staff report said.

Morsell-Haye gave an update on the ad-hoc citizens commission set up to come up with ways to form an independent board to address the city name change issue and involve the Native American community as well as other possibilities. The ad hoc committee was created on June 29’s meeting as a way to establish a commission run by the community, not the city, to create social justice solutions. The move was made during the nationally publicized debate over changing the name of the town to disassociate from slaver and Confederate general, Braxton Bragg.

“We are still putting together our proposal. We hope to bring it to council at the next meeting. If anybody we have not spoken to feels strongly about what this commission should look like or is passionate about participating, please reach out before we bring it to council,” Morsell-Haye said. She and Vice Mayor Norvell compose the ad hoc council committee working on the issue.