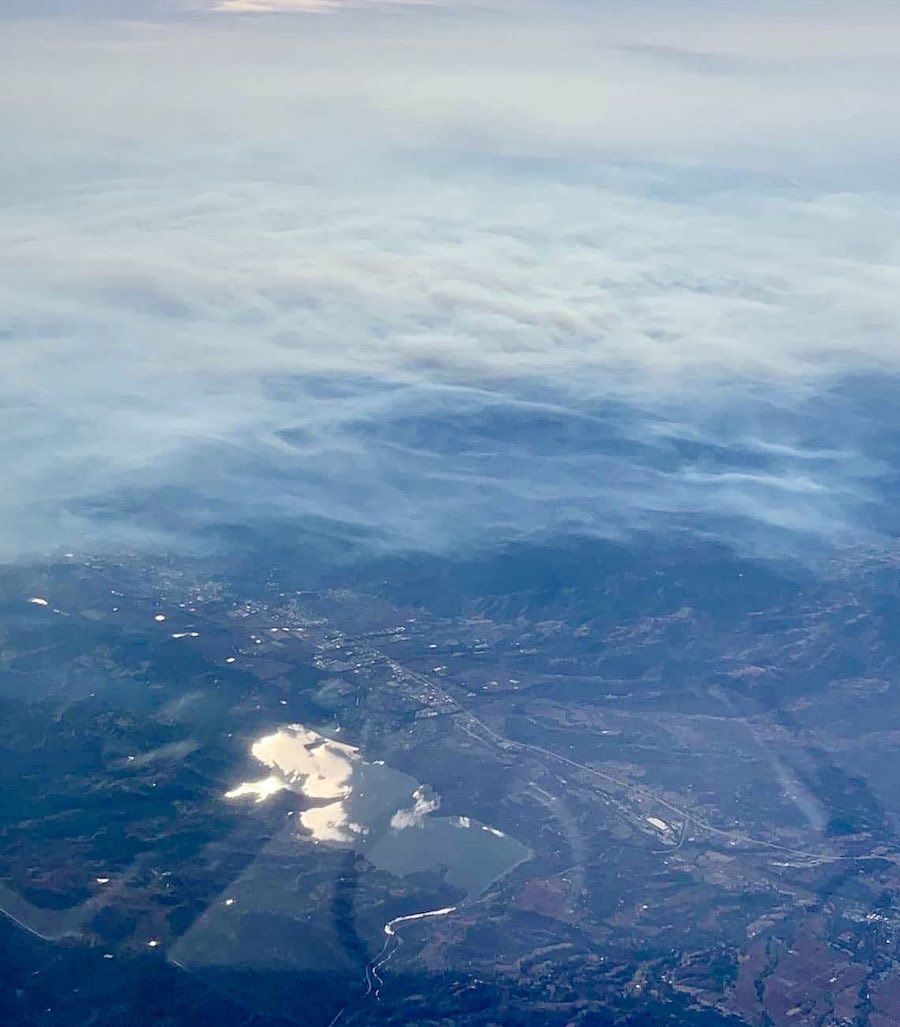 Smoke from the Kincade Fire drifts over southern Mendocino, where Lake Mendocino is visible.

UPDATED 10/26/19 10:45 a.m. — For the latest information on the Kincade Fire from Saturday October 26, please read the article below. New evacuation orders have been issued for Windsor, Healdsburg, and other portions of northern Sonoma County:

UPDATED 10/26/19 12 a.m. — An additional evacuation warning has been issued for the fire: “North of Highway 128 from the Sonoma and Napa County border, East of the Highway 128 to Ida Clayton Road,” should be prepared to evacuate if conditions become unsafe.

Cal Fire has also released an official statement on an “incident within an incident,” that occurred on the fire today, wherein a firefighter and two civilians were forced to use a “fire shelter deployment,” which provides cover to shield people trapped within a fire, while trying to evacuate, resulting in what currently appears to be “non-life-threatening injuries.” Here’s the full statement:

INCIDENT WITHIN AN INCIDENT (IWI): SHELTER DEPLOYMENT
At approximately 6:20 p.m. this evening a firefighter assigned to the Kindcade Fire was involved in a fire shelter deployment while attempting to get civilians to safety. While working on an active portion of the fire the firefighter came across two civilians who were attempting to evacuate from the fire when fire activity intensified. At that point the firefighter was forced to deploy his fire shelter, where he shielded them from fire. The firefighter and two civilians were transported by ground ambulance to an area hospital for evaluation. All injuries appear to be non-life threatening and everyone is expected to survive.

UPDATED 10:30 p.m. — The Kincade Fire has grown nearly 2,000 acres today hitting 23,700 acres this evening, with containment still at 5%. At around 8 p.m. this evening new evacuation warnings were issued for portions of Lake County, including Gifford Springs, Whispering Pines, Anderson Springs, Adams Springs, Hobergs, and Cobb. However, at around 10:30 p.m. new evacuation orders effective immediately were issued, and with the fire growing as it has it’s fair to assume that these evacuation orders are very serious. The new areas under the order are:

An evacuation center has been established at the Healdsburg Community Center. 1557 Healdsburg Ave, Healdsburg, CA 95448

This evacuation extends up to the county line with Mendocino, in the far southeast corner of our county.

Cal Fire is still listing the number of structures destroyed as 49 structures destroyed, and at least another 600 are threatened. A total of 1.327 personnel are assigned to the fire, with more on the way, and in terms of resources there are 141 engines, 17 water tenders, 12 helicopters, 23 hand crews, and 23 dozers.

Winds have been shifting on the Kincade Fire, and as a result the fire has been growing in different directions since it began, and is now threatening portions of Lake County, which have been placed under an evacuation warning, which means that residents should be prepared to evacuate quickly, and should leave if they begin to feel unsafe. NWS Bay Area has forecasted winds to shift the fire towards the south and southeast over the weekend, when fire risk weather, high winds, and widespread power shutoffs are expected to begin leaving millions without power across the state, as well as the areas near the fire.

MENDOCINO Co., 10/25/19 — The Kincade Fire, burning just northeast of Geyserville, continues to grow pushing especially towards the northeast further into the hills in remote, steep country that is hard for firefighters to access. The fire grew an additionally 5,900 acres hitting 21,900, with 5% containment and 1,283 firefighters working to contain the massive blaze.

Geyserville and neighboring areas remain under evacuation, though the fire has not encroached much further to the south and remains far from Healdsburg. However, the fire has already destroyed at least 49 structures and an additional 735 are threatened. Governor Newsom has declared a state of emergency in Sonoma and Los Angeles counties, due to the fires, and California has received grants from the Federal Emergency Management Agency (FEMA) for the Kincade Fire and the Tick Fire in Southern California.

The exact cause of the fire still officially remains under investigation, but PG&E has filed a report with the California Public Utilities Commission (CPUC) saying that a transmission line that they had not de-energized as part of their planned power outage abruptly lost power just before the fire began, and Cal Fire personnel later found broken pieces of PG&E equipment in that vicinity, make it seem likely that the fire was sparked by a failure of PG&E equipment.

Firefighters have been working around the block, bulldozing lines, cutting lines by hand, and attacking the fire directly in some places. Aircraft have also continually been making water and retardant drops on the fire during daylight hours, including some of the “VLATs” or very large air tankers, which are generally DC-10s. Firefighters are working very hard to get some kind of containment lines on the fire in advance of the inclement weather forecasted for this weekend, when very fast hot dry winds are expected to sweep across the whole state.

A fire weather watch has been called for much of Northern California and PG&E has stated that they are likely to cut power to over 800,000 customers, meaning millions of people, this weekend in anticipation of dangerous fire weather.

Smoke from the fire has blanketed much of Northern California leading to smokey conditions in southern Mendocino County, especially the Anderson Valley, while Ukiah has remained clearer. Here is a short video of a forecast for where the smoke will travel over the next several hours from the National Weather Service:

Here is Cal Fire’s information sheet from this morning:


Having to evacuate is terrible under any circumstances, but evacuation to Healdsburg does have the one perk of fine dining at the shelter. State Senator Mike McGuire tweeted a shout out to the many local chefs who are providing food to the evacuees.

Here is our reporting from yesterday: