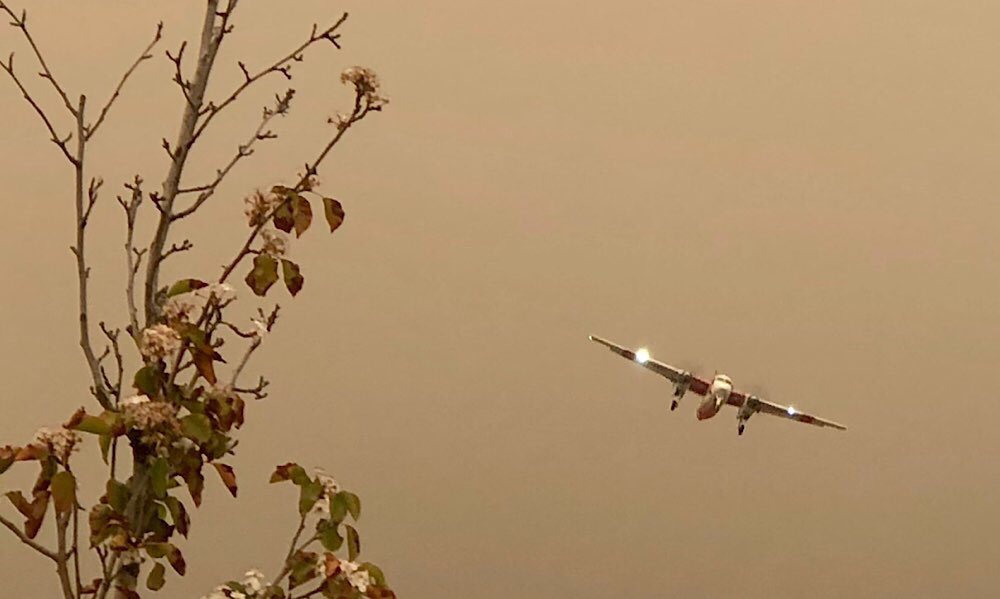 A CalFire tanker returns to Ukiah from the Brushy Incident - A.F. Baumann

MENDOCINO CO., 11/09/18 — The “Brushy Fire,” in the Dos Rios area, has grown to 35 acres and is about 50% contained, as of 9:30 a.m., according to the CalFire update issued Friday morning. The fire has grown about 10 acres since the previous estimate, which put it at about 25 acres in size on Thursday at noon.

Paul Duncan, a division chief with Cal Fire, said that the fire’s current containment is now at 50%, and that there are “lots of resources” on the scene, including personnel from a number of local departments. The fire appears to have begun very close to, or immediately adjacent to, the area of a controlled burn that occurred a couple weeks ago. Whether this is a re-ignition of that fire, or whether the fire has a different cause, is currently unclear. Cal Fire has said that the cause of the fire remains under investigation.

The fire is located in the proximity of Brushy Ridge, near Dos Rios, off of Highway 162 and west of Covelo. Duncan said an air attack would be dependent on smoke, since the heavy smoke from the Camp Fire, in Butte County is affecting visibility in Mendocino County.

“We’re working on full containment…one thing that is hampering containment, is that the relative humidity is 9%,” Duncan said, which creates conditions in which fires can “spot easily and spread quickly.” Around 120 personnel are on the incident, including local departments such as Little Lake Fire, Laytonville Fire, Covelo Fire, and Redwood Valley Fire. “There’s lot’s of resources — they’ll be there til it’s out,” said Duncan, adding there is no current estimate for full containment.

With respect to whether this is a controlled burn that reignited, or has a different source of ignition, Duncan noted the Brushy Fire is “in proximity” to the Brushy controlled burn area, but emphasized that CalFire is still determining what started the blaze.

A different controlled burn, in the Covelo area, did escape its bounds and briefly became an active wildfire a couple weeks ago. But that fire and this one are many miles apart.

Here’s our initial report on the Brushy Fire from November 8.