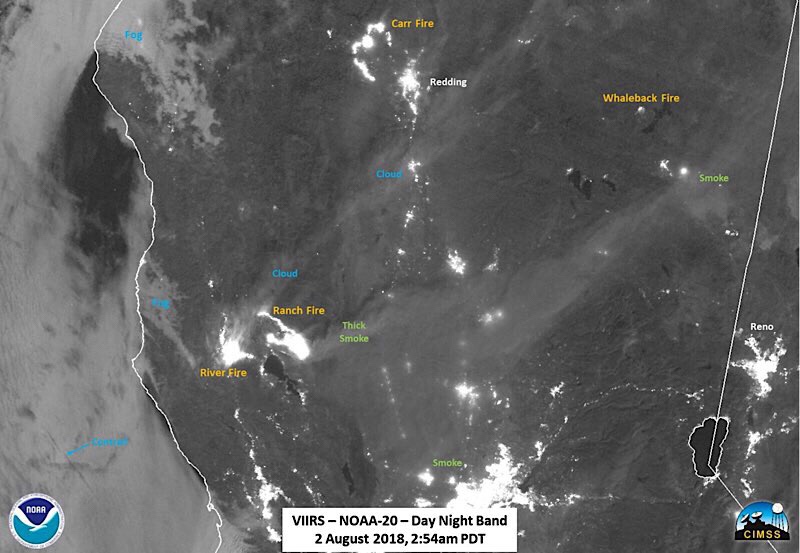 A new urgent evacuation order has been issued, along with a new evacuation advisory, here are the details:

Bartlett Springs Road at Hwy 20, east along the National Forest boundary to High Valley Road, southeast to the 5 Star Fish Farm, southeast to the north side of Hwy 20, east to New Long Valley Road, extending north to the west side of the Indian Valley Reservoir, north to Bartlett Springs Road, east to the LakeColusa County Line, north along the Lake-Colusa County Line extending to Forest Service Road 18N40 (west of the Lake-Colusa-Tehama County Line), and west to the western National Forest boundary in Lake County.

South of Bartlett Springs Road at Hwy 20, west of the Forest Boundary, including Pierce Canyon and High Valley Road, west of Sulpher Bank Drive at Hwy 20 and north of Clear Lake.

CalFire has release new numbers for the afternoon. As of 7:30 p.m. the Ranch Fire had grown another 9,000 acres today, to 83,890 acres, with containment stable at 33%. The fire continues to move across the National Forest, and menacing communities to its south along the shore of the lake. The fire has also continued to push north towards Lake Pillsbury, where firefighters are working hard to stop that progress.

The River Fire grew another 6,000 acres to 41,278 acres, and is 50% contaminated. Combined the fires have burned or are burning 125,168 acres, or 196 square miles, roughly four times the size of San Francisco. Their huge size, and spread across a varied region, mean that conditions from one section of the fires to another is not uniform, with some areas burned out, and other flaring up, and with some areas being repopulated, and new areas under evacuation and warning.

A tremendous amount of resources and manpower with 3232 personel devoted to the fire, 402 engines, and 15 helicopters. In addition, a variety of fixed wing aircraft have made drops on the fires, from the tankers stationed at Ukiah, to the DC-10 and C-130s, and today for the first time the 747 supertanker.

On another note, the Brooktrails Fire Department also wants people in the area to know that the substantial helicopter traffic is because the United States Forest Service is using the Willits Airport as a helicopter base to fight the Eel Fire near Covelo. There is no new fire near Brooktrails as of time of publication.


UPDATE 7:15 p.m. — A new evacuation advisory has been issued for section of Lake County roughly from Paradise Valley and Glen Haven, to Clearlake Oaks. From the LCSD:

This is an Advisory Evacuation Notice for areas east of Paradise Valley and west of Sulphur Bank Road on Hwy. 20. This includes all residents living in Glen Haven and Clearlake Oaks.

UPDATE 4:40 p.m. — With the Ranch Fire continuing to move east, through the northern section of Lake County, a new mandatory evacuation has been issued for Long Valley, High Valley and Spring Valley in Lake County. There is also some word that the fire may have restarted somewhat near Kelseyville.

The Lake County Sheriff’s Office has issued a Mandatory Evacuation Notice for Long Valley, High Valley and Spring Valley in Lake County.  Shelters have been established in Lower Lake & Middletown.

Leave Immediately, traveling to the South.

MENDOCINO Co. 8/2/18 — The fires continue to grow and firefighters continue to build longer and stronger containment lines, creating an increasingly complex situation. In some areas the fires have been mostly contained with strong containment lines, and evacuations lifted, while other corners of the fire have grown quickly forcing new evacuations (for more on evacuations scroll down). The difficult weather conditions, with gusty winds, low humidity and high temperatures have kept these fires, “dynamic.” And worse weather is actually expected in the next couple days, with strong winds in the near-term forecast, and a red-flag warning declared for parts of Northern California.

As of this morning the Ranch Fire had grown to 74,890 acres, with 33% containment, and the River Fire had reached 35,278 acres with 50% containment. The area the fire has burned or is burning has now reached 110,168 acres, or 172 square miles — that’s about three and a half times the area of San Francisco.

The official count for the number of structures destroyed remains at 14 residences and 24 other buildings — but this is not a complete number. CalFire is very careful about announcing losses of homes, and a team is sent into neighborhoods to investigate and come up with a thorough and vetted count before new numbers are announced. Because these teams cannot enter until fire conditions are safe, the count of destroy homes can lag behind — so expect this number to increase somewhat.

Large areas are being repopulated, though some places have seen new evacuations.

As of 9:00 a.m. CalFire had issued the following order for new evacuations around Bartlett Springs Rd.

MANDATORY EVACUATION FOR THE MENDOCINO COMPLEX

A big part of Lakeport had the evacuation order lifted at at around 3:00 p.m., here are the details on that:

In conjunction with the City of Lakeport, CalFire and the Lake County Sheriff’s Office the Mandatory Evacuation has been reduced to an Evacuation Advisory and people may return home in the following areas:

Highland Springs Road and Highway 175 West of the City of Lakeport remain closed.

Returning Residents should be aware that firefighting efforts are continuing, and that smoke may obscure visibility at times and may be hazardous or unhealthy.  If there have been any interruptions in electrical service, food may have spoiled, and should be properly disposed of.

Trash pickup and health care information are available on the Environmental Health page of the Lake County Website:  https://www.lakecountyca.gov  and the City of Lakeport’s Website: http://www.cityoflakeport.com/hot-details.aspx?id=205

More sections of Potter Valley have had the evacuation order lifted and downgraded to an evacuation advisory:

The following areas have been reduced to a Evacuation Warning:

The evacuation advisory has been lifted for areas around Kelseyville:

The evacuation advisory has been cancelled for areas east of Highland Springs Road, west of Soda Bay Road, and north of the Lake/Sonoma County line and south of Clear Lake.  This area includes all of Kelseyville, Buckingham, Clearlake Riviera, Loch Lomond and areas of Red Hills Road, Hwy. 175 Cobb and Bottle Rock Road that were previously under advisory. 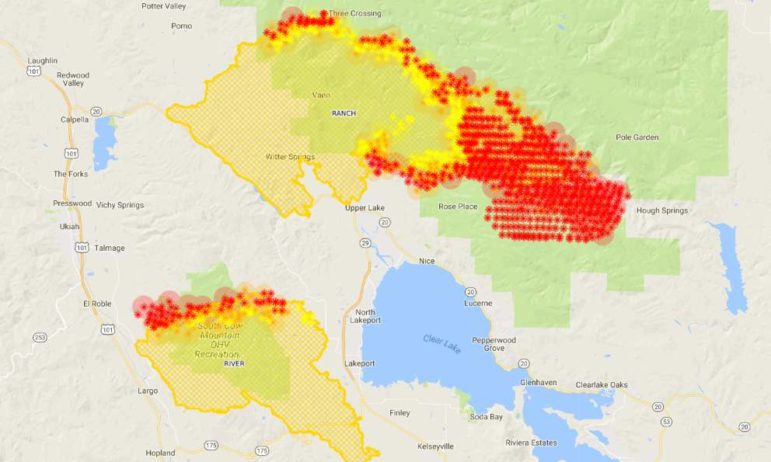 A screenshot of a fire map of the Mendocino Complex, from Aug. 2. The data for this map is gathered by two satellite systems.

CalFire put out an extremely detailed and informative midday fire update, which can be viewed here.

Yesterday the River Fire made a run towards Scotts Valley and Hendricks Rd. but the dozer line along valley floor, near Lakeport, was holding strong. However, the fire jumped the dozer line on its north edge, and firefighters will be establishing another dozer line to the north through BLM land in the cow mountain area. This line will protect repeaters and hopefully create a unified containment line connecting to the east.

There’s also been some trouble along the southeastern finger of the fire, near Finely, but firefighters hope to make good progress there today in solidifying that line, and ending evacuations in that area soon.

The Ranch Fire on the other grew quite significantly. A strong north pushed the fire down through valleys and drainages, growing it into the forest east and south. The fire is now arching over the top of the Upper Lake area and has extended close to where the Pawnee Fire burned a few weeks ago. As a result of this growth firefighters preformed backfires all night north of the dozer lines built to the north of Upper Lake.

CalFire is running a dozer line along Latter Ridge to tie in withe Bartlett Springs Rd. along the southern end of the Ranch Fire. If that line doesn’t hold, firefighters have already build a line further to the south on Hogs Back Ridge. Firefighters will then preform backfires from those dozer lines, with the goal of keep the fire out of the Nice area.

On the end of the fire, burning near the Potter Valley area roads of Mid Mountain Rd. and Pine Ave. firefighters have established strong dozer lines, tied into Elk Mountain Rd. CalFire feels that these lines are strong and is releasing evacuations orders in these Potter Valley communities.

However, to the north east, in the Mendocino National Forest, there remains a great deal of dozer line to make before fully wrapping around and containing the fire.

The sight of flames on the ridges, both from Ukiah and Lake County is often frightening, and we have received lots of communications from readers, worried about the fire coming nearer. It should be noted that, especially in the wake of the devastation of last year’s fire, authorities have been extremely cautious and quick to declare evacuations and advisories. That is not to say that such actions are taken prematurely, but rather that the lesson of last year’s fires was that fire conditions have become more erratic, less predictable, and that fires move fast. So, while all are encouraged to remain vigilant and depart if they see a fire approaching, be aware that the MCSO and LCSD are in close communication with CalFire to be constantly assessing when an evacuation may be necessary.

Undersheriff Matthew Kendall, who has been working on the county’s fire response, noted that as winds shift in the early afternoons and then again in the evenings, portions of the fire that were previously hidden by smoke can become visible, often in the Ukiah Valley. This does not mean the fire is now heading towards Ukiah, but only that where the fire is active is more visible from Ukiah since the air is often clearer.

CalFire made this statement on the issue today:

At sunset, flames on both the Ranch and River fire of the Mendocino Complex can be visible from surrounding areas and roads. The site of flames at night can be somewhat alarming. Fire officials are continually assessing the situation and will put out official releases and evacuations when deemed necessary. The communities members lives are of the utmost importance and priority when making strategic decisions. Thank you for all of your support and vigilance as firefighters continue to work aggressively to fully contain both fires.


Here’s yesterday’s coverage of the fires: