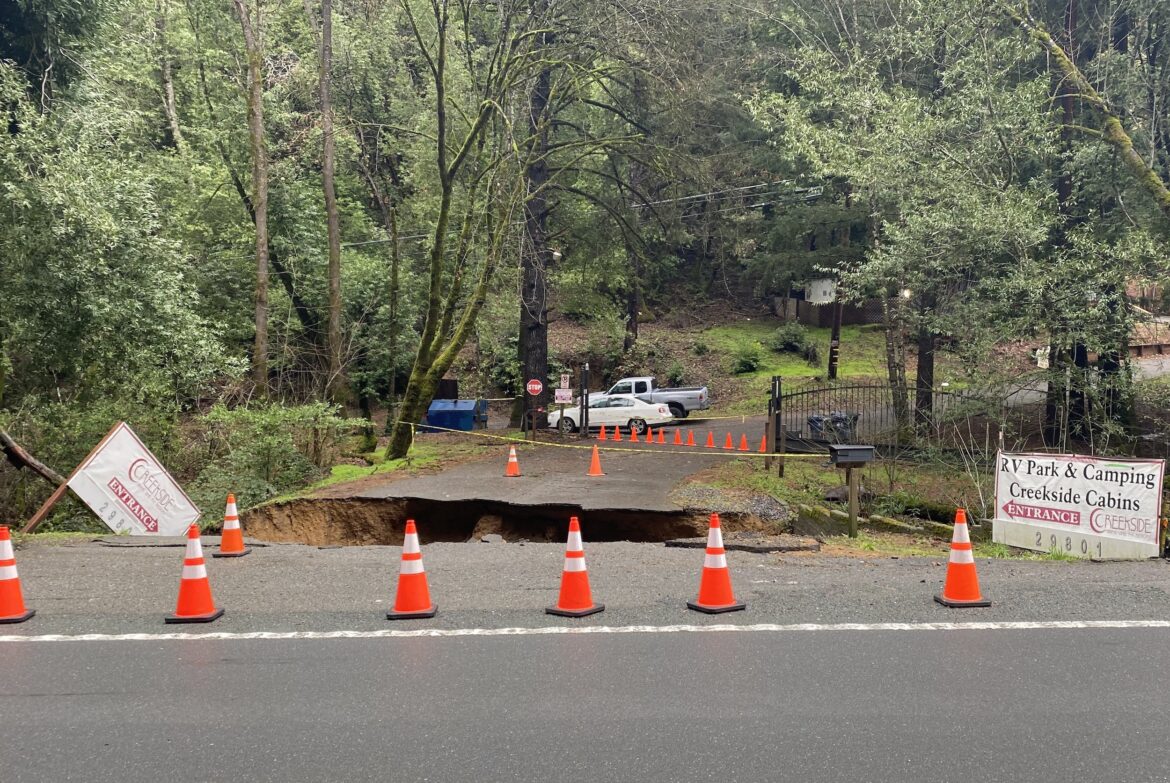 A view of the sinkhole blocking the driveway to Creekside Cabins from US Highway 101 on January 15, 2023/Kate B Maxwell

UPDATE, 1/18/23 — In a news release, Mendocino County announced that a bridge will be installed, utilized, and subsequently removed from Creekside Cabins & RV Resort from Jan. 24 to Jan. 27. It’s possible that not all residents will relocate, according to the release.

Here’s the update in full:

On Friday, January 20, 2023, Mendocino County Social Services staff along with the Sheriff’s Office, Legal Aid and other resource agencies will be meeting with all residents to discuss plans going forward, including relocation if the resident so chooses. As the housing at the site is varied, resource plans for potential removal will have to be addressed on a residence by residence basis.

Additionally, County staff, Caltrans and contractors will be meeting at the site today, to work on logistics for the temporary bridge to allow residents to exit the property. Traffic control measures will be in place at the site on Hwy 101 from January 24, 2023 through January 27, 2023 while the bridge is installed, utilized and subsequently removed. The County continues to encourage the public to avoid the area so that County staff, resource agencies and contractors can perform any needed work and provide assistance safely.

WILLITS, CA, 1/16/23 — Residents of Creekside Cabins & RV Resort have been without vehicle access for more than two weeks after a sinkhole swallowed the culvert leading into the mobile home park. This weekend brought key developments in their predicament, as county officials say residents will now be relocated following a series of decrees from Mendocino County’s department of Code Enforcement.

“As part of its summary abatement process, the County has reached out to a contractor to provide a temporary ingress/egress over the sinkhole,” a Saturday afternoon news release read. “Because of traffic safety issues, the bridge is only expected to be available for a short time to allow occupants to relocate to a safer location.”

The release encouraged those who don’t live at Creekside — directly off of Highway 101 north of the town of Willits — to avoid the area for the safety of residents, county employees, and contractors. Anyone exiting or entering must use a small footbridge adjacent to the park, as it is currently the only means of accessing the property.

The county news release did not elaborate on where residents will be relocating to or whether they’ll will be able to relocate in their vehicles or RVs; these details and the timing of constructing a temporary bridge are still being ironed out, Supervisor John Haschak told The Mendocino Voice.

As of Monday, no bridge was yet in place; but a news release Monday afternoon announced, “the County of Mendocino has dispatched a contractor to work with Caltrans and various other State and local agencies to provide temporary, short term, ingress and egress to allow residents of the park to safely relocate from the area.”

The Voice could not immediately reach staff from Code Enforcement for comment on Monday, but expects to share more information this week.

“Mendocino County Social Services and the Mendocino County Sheriff’s Office will be on-site in the coming week to talk with residents about this temporary ingress/egress response,” the release detailed. “This will include discussions on eligibility for assistance programs that may be available to them.”

In another news release on Sunday, Mendocino County Public Health issued a Public Health Advisory, saying the County Health Officer was “investigating concerns for the health and human safety of the residents.” Specifically, the county “has concerns about whether septic tanks have been reached for required monthly processing and whether there has been appropriate garbage disposal and retrieval.” Any overflow of waste could contaminate water and foster bacteria on the property, the news release detailed.

“Exposure to and ingestion of contaminated water can result in infections, skin rashes, gastrointestinal illness, and other infectious diseases,” according to the release.

Although county officials say Social Services has made frequent visits to the property, especially in attempts to provide residents who need it with oxygen, Public Health believed that these efforts may not wholly meet residents’ needs.

“The lack of access may also impair the ability to replenish oxygen supplies for some who need it, to maintain electrical appliances, to shop for necessities, to safely travel to school or work, and to receive emergency attention by first responders, fire, or ambulance,” the county wrote.

The county said Social Services, the Sheriff’s Office, and the Office of Emergency Services will be available to provide “support and guidance” as residents relocate.

Read more on the sinkhole at Creekside Cabins here.